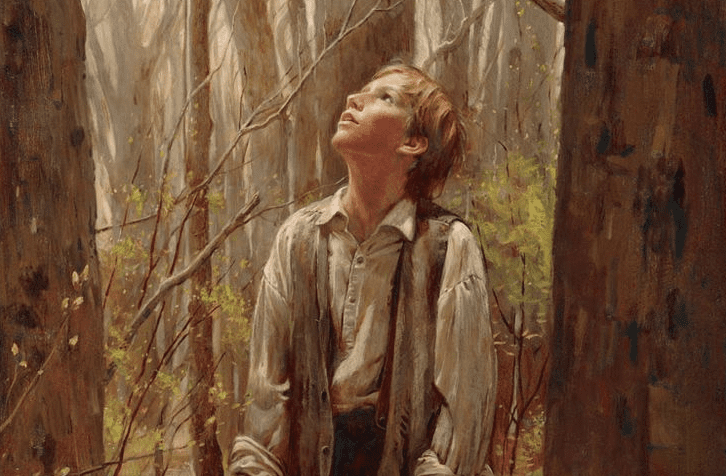 Hallowed Ground: The Sacred Path of the Prophet Joseph

Cover image: “The Desires of My Heart” by Walter Rane.

My earliest memory of a spiritual experience involves Joseph Smith and Carthage Jail. I recall perching on a tiny chair in a Bloomington, Indiana church as my Jr. Sunday school teacher shared Joseph’s story, touching on the major points of his life. The teacher ended with the martyrdom of the prophet, showing a picture of the old Carthage Jail. Nearly fifty years later I can still visualize the small classroom and remember the feeling that washed over me as my teacher bore her testimony to a group of children no more than five years old. Although I was too young back then to recognize that witness of the Holy Spirit for what it was, I have since learned why the experience left such an impression on my young heart.

Each June, as the anniversary of the Prophet Joseph’s death approaches, I think of him. I marvel at the faith which seemed to be his defining characteristic. Tar and feathers, betrayals, imprisonment, false accusations—none of these were enough to sway him from the path he traveled from the moment he saw a brilliant light and heard a heavenly voice. How many times have I imagined Joseph leaving the grove of trees where a life altering vision had opened to his view? The simple farm life he had known was forever changed. I have wondered if, later, when the persecution became nearly unbearable, Joseph ever regretted what he set in motion by offering that prayer in the grove.

I honor Joseph’s family for being unusually supportive when he spoke to them of that first vision. What a claim to make! A fourteen-year-old farm boy said he saw God—and not the god the Christian world preached—but Joseph “saw two personages,” God the Father as a glorified physical being, and His Son Jesus Christ. These bold assertions from an insignificant teenager rocked the religious community of his day.

I have stood in the peaceful forest where Joseph first spoke to God. I have strolled the streets of Palmyra and have examined the farmhouse built on the site where Joseph Sr. and Lucy Mack Smith’s large family toiled and slept and studied the Bible. I have stood in the airspace where an angel appeared in Joseph’s upstairs bedroom. And I have felt the power and importance of those places. I walked on hallowed ground.

Whether in the temple, the Johnson farmhouse, or a room above the Whitney store, Joseph received an astonishing outpouring of revelation and heavenly visitations while in the Kirtland, Ohio area. Exploring these places has allowed me to envision more clearly the appearance of the Savior and God the Father, as well as other angelic messengers, and to ponder all that occurred in the School of the Prophets as Joseph and his associates met together. I have walked where angels trod.

Viewing the replica of Liberty Jail in Missouri—listening to an account of the four months the prophet and others spent there in wretched conditions—I was reminded that a prison can serve as a temple when its inmates are humble and place their trust in the Lord no matter how desperate the circumstances. Many of Joseph’s closest friends said he was never the same after enduring the absolute misery of that experience. He was sanctified and strengthened, and church members today still benefit from the record of his pleas to and responses from the Lord during that period. (D&C 121-122) Through suffering and faith, even a jail became hallowed ground.

My recollections of Nauvoo are particularly lovely. This was sacred ground indeed. As recorded in my journal, “A certain sweet peacefulness has attended all of these sights and I have felt a surprisingly deep connection to the people [who lived here].” Standing on the steps of the Nauvoo temple after attending an endowment session, I experienced a moment of surpassing joy—a nearly electric sensation—which left me with the impression that the town was sanctified by the sacrifices of those who built it. Gazing out on the statues of Joseph and his brother Hyrum on horseback was a vivid reminder of the cost.

My journal entry after visiting Carthage Jail reads, “What a moment–to stand in the very room [where four innocent men were assaulted by a bloodthirsty mob]; to trace with my finger the hole in the door left by the bullet that took Hyrum down; to stand by the window that Joseph leaped to and fell from. I have imagined that scene for decades.” Later, standing outside the old stone jail where he died, a memory flooded my mind: my childhood experience in Sunday school, when I first received a witness of Joseph Smith the prophet.

One hundred and seventy four years after Joseph’s martyrdom, the spiritual lessons gleaned from studying his life are still relevant for serious seekers of truth. To paraphrase Joseph’s words—“so great [are] the confusion and strife [on] the internet and social media] that it [is] impossible for a person…unacquainted with men and things, to come to any certain conclusion who [is] right and who [is] wrong.” (JS History 1:8) Over and over in his short life, Joseph applied the time honored formula for inviting revelation while searching for truth: Search. Ponder. Pray.

Everywhere Joseph went, revelation followed. Whether he was in a forest, a farmhouse, a temple, a store, or even in jail, he earnestly sought the wisdom he lacked, and God responded. Because the prophet faithfully recorded and acted on the inspiration he received, it seemed that God was willing to grant a nearly constant flow of revelation to assist Joseph in fulfilling the work he had been assigned. I honor the prophet Joseph Smith, and add my voice to many others who have a testimony that the work he wrought was truly God’s work. I have traced Joseph’s footsteps and felt the witness of the spirit that I stood on hallowed ground.

They tell me that you lived here,
a rough, unlearned boy.
You worked the family farm
the best you could.
They tell me you were searching,
so hungry for the truth
you went to pray
out in these very woods.

They tell me you were chosen
as prophet of your day,
restoring precious truths
at God’s command.
They tell me you saw angels
and handled plates of gold,
and built this lovely city
where I stand.

They tell me that you died here
outside this old stone jail,
with your beloved brother
at your side.
They tell me you were fearless
and faithful till the end,
and sealed your testimony
with your life.

I stand on hallowed ground.

Absolutely beautiful! I, too, have visited the places described and felt the powerful testimony that you bear. In fact, living in “The City Beautiful,” I walk those hallowed streets and enter and exit that Temple often. Thank you for the flood of feelings evoked by this gorgeous song. (And our Primary children are singing Teach Me About the Temple as part of their Sacrament Meeting Presentation this year. So thanks for that one too!)