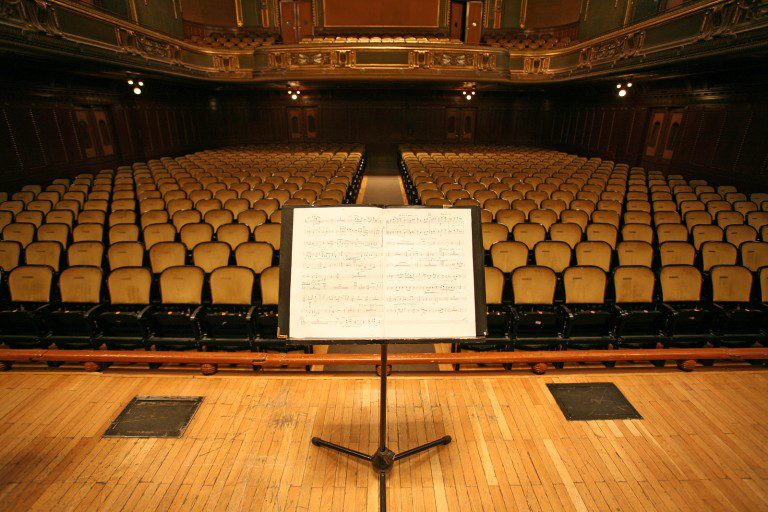 Jacob loved music. He sang while he milked the cows, changed sprinkler pipe, or rode his horse. But he lacked confidence in his ability. One of his brothers had heard him singing once and had made fun of him, so Jacob was careful to only sing when he thought no one else was around.

There wasn’t much in the way of music in Jacob’s small, rural community. The high school that he attended didn’t have a band, a choir, or anything. But in his junior year, a new math teacher was hired who also had a minor in music. She was going to teach a choir class.

Jacob was thrilled at the thought of having a music class each day. But then he realized others might hear him sing, and that scared him. He thought about it for a long time. He would get the determination to join the class only to have his resolve waver. When it came time for registration, he learned that there was no audition. The teacher was willing to take anyone, especially boys. Grades were based solely on attendance in class and at the concerts.

Jacob decided that he could just mouth the words, and no one would know. He could fake like he was singing and just enjoy listening to the others. So, with a little bit of trepidation, he signed up. However, as soon as the teacher started class the first day, Jacob realized he would at least have to sing something so the teacher could determine what group to put him in.

As each choir member sang a short phrase from “America the Beautiful” and the teacher listened, Jacob began to tremble. But he realized that most of the class didn’t know much about music, either. Oh, there were a few who seemed to. And there were others who didn’t sound that good but were full of confidence. When it was Jacob’s turn, he sang so quietly that the teacher had to move up close to him and have him sing again.

“You sound like you’re a baritone, Jacob,” she said. “You could probably do either tenor or bass, so I will see where I need you most.”

“What’s a baritone?” Jacob asked one of his friends.

“It is a barely tone, which means a person can barely sing,” the boy replied with a laugh.

“That beats being tenor—ten or eleven notes off,” another boy joked.

Jacob tried to smile at their humor, but it wasn’t making him feel better.

As the weeks wore on, Jacob loved the music. He started out mouthing the words, but sometimes he became so caught up in the joy of what they were doing that he forgot and actually sang.

One day, Jacob was late to school, as usual after milking the cows, and he missed the beginning announcements. The teacher passed a roll around in class, and when the paper came, Jacob signed it. But a few minutes later another paper came.

“What’s this?” he asked the boy standing next to him.

“The roll, duh,” the boy answered.

“Then what was the last paper?” Jacob asked.

Jacob was so frightened he couldn’t even think of the words to mouth them all class period. When class was over, he hurried to the teacher and explained his mistake and that he couldn’t sing a solo.

“Jacob,” she said, “I know that a lot of times you just mouth the words, but I can tell when you sing, and you actually have a beautiful voice. I hope you will reconsider.”

The teacher promised to work with Jacob during lunch hour. Added to that, Melonie, a girl Jacob liked, would sing the female solo part. The three of them met each day, and Jacob sang with more and more confidence. Their duet at the concert turned out well, and they received a standing ovation.

Through the years, Jacob and Melonie continued to sing together, and after high school graduation, they were married. As he took Melonie into his arms on their wedding day, he told her that signing that solo paper by accident was the best mistake he ever made. She smiled and said she was glad he had.