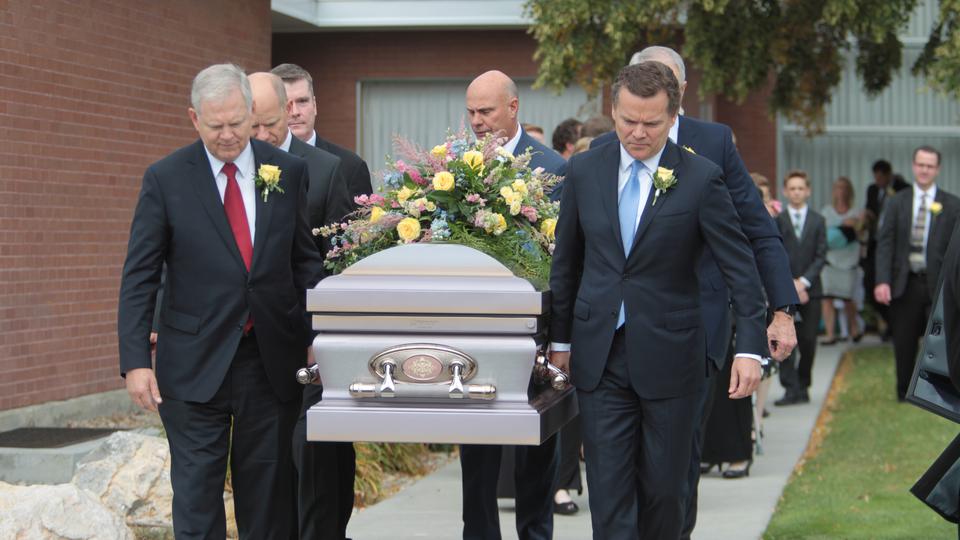 Funeral services were held Monday, October 8, 2018, in Salt Lake City for Sister Barbara Bowen Ballard, wife of President M. Russell Ballard, acting president of the Quorum of the Twelve Apostles  of The Church of Jesus Christ of Latter-day Saints. Sister Ballard died at home at the age of 86, Monday, October 1, after a long battle with Alzheimer’s and other health issues.

“My family and I thank you for your love and your outreach and kindness,” said President Ballard, who spoke briefly about his wife during his general conference address about Joseph F. Smith’s vision of the redemption of the dead Sunday morning. The vision is marking its 100th anniversary.

“How grateful I am today to know where my precious Barbara is and that we will be together again with our family for all eternity,” said President Ballard.

All the members of the First Presidency and the Quorum of the Twelve Apostles and some of the general officers of the Church attended the funeral and were seated on the stand.

“I’m grateful for this opportunity to speak to you today as a loving friend and neighbor of Barbara Bowen Ballard,” said President Oaks, whose wife, Kristen, is President Ballard’s second cousin. “Barbara Ballard had the capacity to touch the lives of everyone.”

President Oaks said the spouses of general authorities and general officers are “one of the great resources” in the leadership of the Church. “They aid and support their husband or wife in all that they are called to do. I see many great examples of this among the women and men who are eternal companions who are general authorities or general officers. None have performed that vital task more valiantly and effectively as Barbara Bowen Ballard.”

“Sister Ballard leaves a rich heritage for many friends and loved ones,” said President Eyring, who read a letter from the First Presidency during the funeral. “She is a woman of grace and beauty.”

“We’ve lost our ministering wife and mother and grandmother and friend and a sister,” said Elder Holland, who said the Ballards have been “surrogate parents” for he and his wife, Patricia, ever since he was called to serve as a general authority.

“For Barbara and her family, this is a valedictory moment, the glorious continuation of which will come years hence when Russell passes through the veil and their 67-year courtship is resumed,” he taught.

“Welcome to the sixth session of general conference,” quipped her son Craig, acknowledging the attendance of many Church leaders at the funeral.

He spoke about her positive attitude. “She taught us to work through and live through adversity and joy with a smile.”

“She was not really comfortable at a pulpit,” said Craig. “She preferred to be on the side and smile and shake hands and love the people.”

“Dad has remarked many times that when she was with him at conferences and meetings, she was the center of attention,” explained Sister Ballard’s daughter, Holly.

“She was an amazing woman,” she said. “Mom’s beautiful blonde hair, blue eyes, her warm sweet smile and her peaceful and kind nature just radiated every Christlike attribute. … She never spoke ill of anyone and scolded us when we did.”

Music for the funeral was provided by Dallyn Vail Bayles, Jenny Oaks Baker and Melissa Garff Ballard. They performed two songs during the funeral, “The Prayer” and “Savior, Redeemer of My Soul.”

Singer David Archuleta sang “Be Still, My Soul” at the close of the service.

She served in many Church callings and volunteer responsibilities throughout her life.

Sister Ballard also served alongside President Ballard as he presided over the Canada Toronto Mission from 1974 to 1977. He was called as an apostle in 1985.

She is survived by her husband, seven children, 43 grandchildren and 90 great-grandchildren.

Burial was at the Salt Lake City Cemetery. David Archuleta sang “My Little Prayer” at the interment. The grave was dedicated by the Ballards’ son-in-law, Paul N. Clayton.