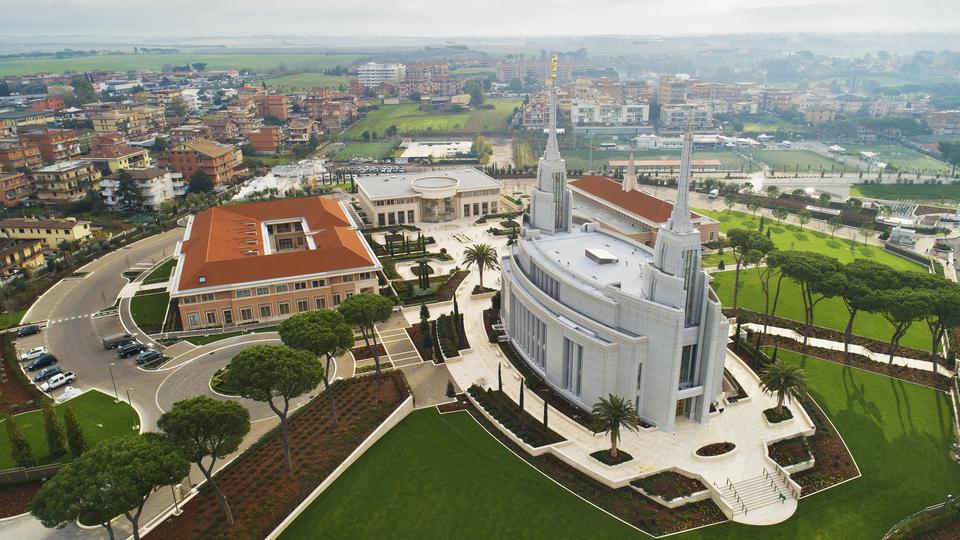 To see all of Meridian Magazine’s exclusive coverage of the events and stories surrounding the historic dedication of this temple, visit latterdaysaintmag.com/rome.

President Russell M. Nelson of The Church of Jesus Christ of Latter-day Saints will dedicate the Rome Italy Temple Sunday, March 10, 2019. Unlike most temple dedications, Rome will feature three days of dedicatory services (seven sessions in all) so more Latter-day Saints in the area can participate in these special proceedings. Also, the entire First Presidency and Quorum of the Twelve Apostles will be together in Rome. This is believed to be the first time in Church history that all 15 leaders have gathered in one location outside the United States.

“A temple is literally a house of the Lord. Each temple is a holy sanctuary in which sacred ceremonies and ordinances of the gospel are performed by and for the living and also in behalf of the dead,” President Nelson says to introduce a new virtual tour of the Rome Italy Temple. “We build temples so our faithful members can visit often and receive the most sacred ordinances of our faith. Before our temples are dedicated for their sacred purpose, the public is invited to see the beauty of the temple and learn about the commitments we make there with God.”

Why is so much attention being given to the Church’s temple in Rome? At the Rome Temple media dayin January, Elder David A. Bednar (chairman of the Church’s Temple and Family History Department) explained the faith’s global makeup and mindset. He also recognized that Rome is one of the most historic locations in the world, a city rich in biblical history, where the ancient apostles Peter and Paul preached the gospel of Jesus Christ.

You may also enjoy: “Photo Essay: Rome Temple Visitors’ Center—Unlike Any Other”

“This is a worldwide religion,” Elder David A. Bednar said of The Church of Jesus Christ of Latter-day Saints. “We have more than 16 million members and the Church is recognized and established in over 170 nations, so it’s only a matter of time before we have temples in most major cities in the world, but it is of particular significance to have a temple in Rome, the Eternal City.”

At the same news conference, held in front of the vibrant, Christ-focused stained-glass window inside the temple visitors’ center, Elder Massimo De Feo spoke of Rome’s place in the history of Christianity.

“As the center for Christianity for millennia, Rome couldn’t be without a temple dedicated to Jesus Christ,” said Elder De Feo, a General Authority Seventy and native of Italy. “Rome is also the Eternal City. We needed to have a temple in the Eternal City because it is a symbol of eternity. The temple is the place we learn that life is eternal.”

See a virtual tour of the Rome Temple as guided by Elder David A. Bednar and Elder Ronald A. Rasband:

The Church’s temples differ from churches where members meet for Sunday worship services. Temples are considered “houses of the Lord” where the teachings of Jesus Christ are reaffirmed through marriage, baptism and other ceremonies that unite families for eternity.

Prior to the dedicatory services that take place Sunday through Tuesday, President Nelson will lead a Saturday evening devotional for local youth, which will emphasize the importance Latter-day Saints place on temples.

The Rome Italy Temple will serve over 23,000 Church members living in Italy and in neighboring countries. Currently there are more than 160 operating temples worldwide, including 14 in Europe.