Elder Holland Connects with Thousands of Members in Japan, Korea, and the Micronesia Islands | Meridian Magazine 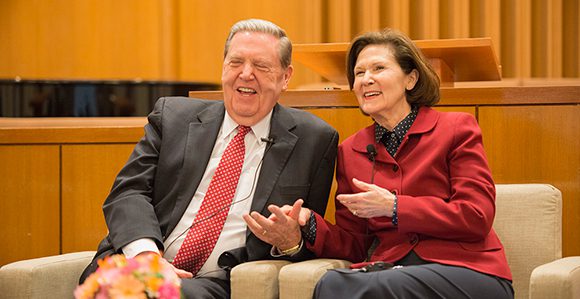 Elder Holland Connects with Thousands of Members in Japan, Korea, and the Micronesia Islands

Elder Jeffrey R. Holland was called to the Quorum of the Twelve Apostles 23 years ago. He’s been a General Authority for almost three decades.

His broad ecclesiastical duties have made him something of a globetrotter in a white shirt and tie—traveling far and wide to testify of Jesus Christ and to minister to the many Latter-day Saints across the world.

But occasionally he can still discover a new land, meet new people, and return home blessed with new friends. During a recent trip to the Church’s Asia North Area, he visited, for the first time, the American island-territory of Guam in the western Pacific.

He and his traveling companion, Sister Patricia Holland, were uplifted by the members in Guam—and by their many fellow Latter-day Saints they met with in Japan and Korea during their 10-day tour (February 17–26) of the area. “We were delighted to see the conspicuous strength of the members and the growing maturity of the leaders, both men and women, in the area,” Elder Holland told the Church News.

The Hollands were joined in their travels by members of the Asia North Area Presidency—Elder Scott D. Whiting, Elder Kazuhiko Yamashita, and Elder Yoon Hwan Choi of the Seventy—along with their wives, Sister Jeri Whiting, Sister Tazuko Yamashita, and Sister Bon Kyung Choi.

Gathering with the Saints

The trip included stops in the Japanese cities of Nagoya, Tokyo, and Sendai; the Korean capital city of Seoul; and Tamuning, Guam.

To read more about Elder Holland’s visit on the Church News, click here.