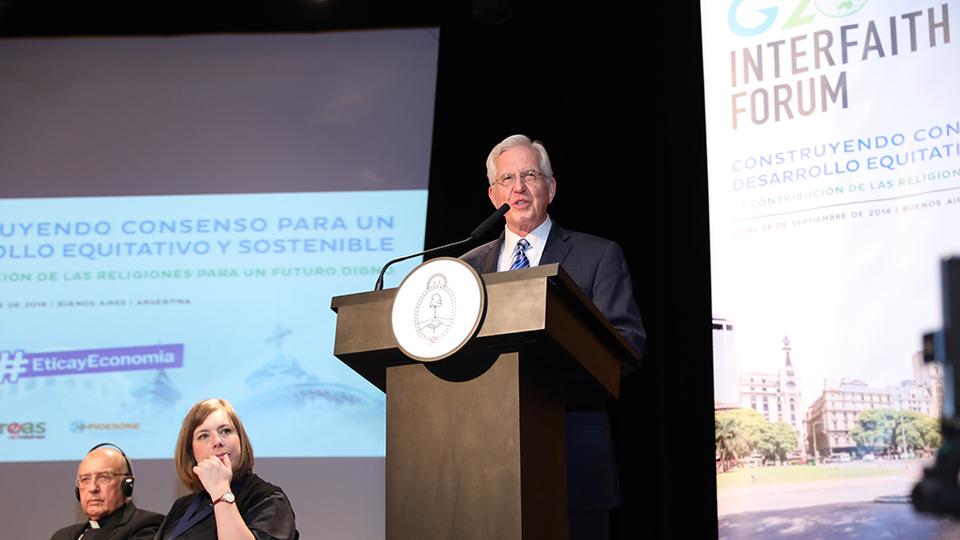 “As I fulfill my assignment to speak about what the Church is doing to help the less fortunate, I want you to know that we don’t seek recognition, only to share our experience and build understanding,” said Elder D. Todd Christofferson of the Quorum of the Twelve Apostles of The Church of Jesus Christ of Latter-day Saints. Elder Christofferson joined a number of other global faith leaders at the G20 Interfaith Forum in Buenos Aires, Argentina, Wednesday, September 26, 2018, to discuss the Church’s efforts to help the needy.

“It’s a pleasure to be back in Argentina,” he told the leaders from major religious traditions gathered at the Manuel Belgrano Auditorium. “I lived here for two years as a missionary decades ago.”

Elder Christofferson participated in the first plenary session of the forum to address the topic of religions and emerging global challenges.

“Over the past three decades, the Church and its members have given more than $2 billion in assistance to people in 195 countries and territories,” Elder Christofferson reported.

“Last year alone we worked with more than 1,800 partners in 139 countries and territories on more than 2,700 humanitarian projects that served millions of people,” he added.

Elder Christofferson said the Church responds to natural disasters by rushing hygiene kits, food, water and volunteers to stricken areas. Recent examples include the earthquakes in Mexico, hurricanes in the Caribbean and typhoons in the Philippines.

As an apostle of the Church, Elder Christofferson travels throughout the world sharing the teachings of Jesus Christ.

“I have seen beautiful places and great wealth. But I have also met numerous people of great potential and goodness living in terrible poverty, struggling to provide the basic necessities of life for their families,” he said.

“Someone who lacks sufficient food cannot pursue an education,” he said. “The ultimate goal is always to foster greater dignity, self-sufficiency, and independence.”

Elder Christofferson highlighted the Church’s Self-Reliance Initiative, which started in 2015. It now operates in 130 countries. “In just three-and-a-half years, over 700,000 participants have taken a course, including thousands from other faiths.”

“People who are self-reliant can better serve in their communities and make valuable contributions to their societies and nations,” he said.

“Religious organizations and faith communities have a vital role to play in alleviating poverty and helping people live healthier, happier, and more productive lives. For that and many other reasons, religious freedom remains essential to our efforts,” he said.

Elder Christofferson said it is becoming more common for religion and religious freedom to be viewed as a burden on society. “That is simply not true. Religion is fundamental to society well-being, and freedom of religion benefits not only believers but all of society, whether they know it or not.”

The senior Church leader said religious freedom protects other fundamental rights such as the freedom to express belief about God. He said it also allows religion to “perform the vital function of promoting civic duty, providing for the less fortunate, and nurturing strong families and communities.”

Elder Christofferson pointed to data that shows religiously involved people are less likely to be violent, they are more likely to belong to community organizations and they volunteer in the community at much higher rates than those without religion.

“I am not for a moment suggesting that religion is the only source of virtue within society, or that secular people cannot be highly moral,” he said. “My point is simply that very often religion does the hard work of inculcating the habits and mores necessary for free and democratic societies to exist.”

Prior to Elder Christofferson speaking at the 2018 G20 Interfaith Forum, he visited with government leaders, missionaries and members in Argentina and Chile.

He was joined at the forum in South America this week by another Latter-day Saint leader.

On Thursday afternoon, Sister Eubank addressed the topic of how religious communities make positive contributions to protecting and empowering women. She spoke about the leadership opportunities Latter-day Saint women are given in their local congregations. She said the Relief Society was organized 176 years ago to build faith, strengthen families and provide relief.

“In the Relief Society, each woman in every congregation has a peer mentor to connect with monthly or whenever she needs help,” Sister Eubank explained. “Relief Society members do lead out with surprising and interesting results.”

“When a courageous woman emerges to participate at any level, from the barrio to the boardroom, we must do all we can both personally and institutionally to defend her basic rights and help her cause,” she told the forum.

On Friday, she joined a panel to discuss the advancing the work of religiously affiliated humanitarian organizations.

“If we want to affect real, lasting cultural change [and] harmful practices, religion is the great motivation that helps people make those kinds of positive changes in their lives,” Sister Eubank said.

“There’s tremendous potential for people in their everyday lives to work together with their neighbors and their friends and communities of other faiths,” admonished Sister Eubank. “Get to know them, find community things that you can do and find ways to interact with people who may be different from you. That’s really one of the takeaways from this conference for me.”

How wonderful to be able to discus these important and timely topics on the world stage. Sister Eubank’s efforts to empower women and help them bless their families will reverberate for generations to come. Bless them both.