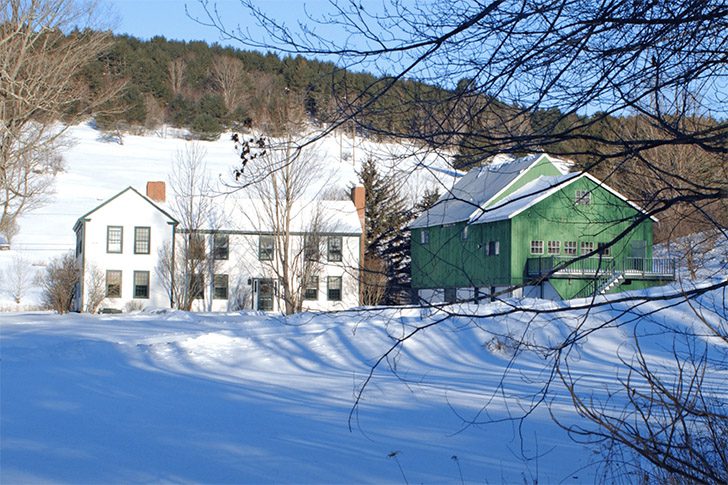 The new 2021 Church History Come Follow Me calendar has 12 beautiful images—and they will become even more beautiful and more significant to you after I give you some brief insights and stories for each one (and don’t miss my photographer’s notes at the end).  The January photo is poignant as it shows a place of hardship and destiny for the Joseph and Lucy Mack Smith Family.

It helps to understand and give context that the Smiths were married in Tunbridge, Orange County, Vermont on Sunday, January 24, 1796.  Their ancestors had already been in New England for four generations on each side of the family.  New England was where their roots were sunk deep.

Due to hardship and unforeseen circumstances, including health issues, the Smiths moved eight times during their first 20 years of marriage in New England. All the moves were within a 40-mile diameter circle. What was tethering them to that center place?  Family!  Asael and Mary Duty Smith (the Prophet Joseph’s paternal grandparents) lived in Tunbridge—in fact, the farm Joseph and Lucy Smith bought in Tunbridge was part of the Asael Smith Farm.

Solomon and Lydia Gates Mack (Lucy’s parents) lived in Sharon or in Royalton Township in Windsor County Vermont. They were very important to Lucy—especially her mother. Joseph and Lucy would rent a home and some land in Sharon Township from Solomon Mack. This is where the Prophet Joseph was born. Joseph, Sr. and Lucy really never wanted to move too far from either family.

In 1812 and 1813 the dreaded typhus or typhoid fever epidemic swept through the Upper Connecticut River valley and left more than 6,000 dead in its wake.  There was not a family in that area who was not affected by the dreaded fevers.  All 7 of the Smith children contracted the disease—including Sophronia, Joseph’s older sister, who had it the worst.  She was besieged with the fevers for 89 days in a row and was given up for dead by her doctors on the 90th day. Miraculously, she was healed.  It was during this epidemic that young Joseph got the dreaded aftermath disease of osteomyelitis which required a life-threatening experimental operation to save his leg.

It took the Smiths a full year to get through all the sickness and disease of 1812 and 1813. By this time their meager savings were wiped out as they had paid all they had earned and saved for medical bills. This would require a move from their West Lebanon, New Hampshire cabin back west across the Connecticut River to Norwich, Vermont—just six miles away.

You can order your 2021 Church History Come Follow Me Calendar for just $15 by CLICKING HERE.

THIS Norwich home is featured as the January 2021 photograph. Here the Smiths made a go of farming in 1814.  Their crops utterly failed and they barely survived that winter by selling the apples that were on the farm so they could buy some flour and have sufficient to make bread.

That next year, 1815, they planted crops again—but all failed again.  It was about this time, late in the season, that newspaper reports began circulating that there was good land available in the Genesee—Western New York—and that land was selling for $2 to $3 an acre and wheat was being raised there abundantly.  Joseph, Sr. commented to Lucy, his wife, “I think if our crops fail again next season, we should move to Western New York.”

This was a radical statement for the Smiths to consider and would shatter their 40-mile diameter circle of safety in New England with their families nearby.  The move would be more than 335 miles!  Though the opportunity seemed great, I’m sure in their hearts they wanted to stay in New England.

Little did the Smiths know that half-a-world away, in the Dutch East Indies (Indonesia), Mount Tambora on the island of Sumbawa began erupting on April 5, 1815. A series of explosions and eruptions continued, then, five days later, April 10, 1815 the entire mountain turned into a flowing mass of liquid fire and exploded in the largest eruption in recorded history, spewing forth 10 billion tons of volcanic ash into the atmosphere.  The steam and frequent smaller eruptions continued for six months.  So much ash and volcanic material entered the atmosphere, it changed the weather patterns on the whole earth for the next year.

On June 9, 1816 a series of ice storms began pummeling New England with a vengeance, all of which were caused by the Mt. Tambora eruptions. Farms throughout New England were decimated, including the Smith’s, where all their crops were wiped out.  It was dubbed “the year without a summer” and caused a great deal of migration from New England.  Joseph and Lucy said to each other, “It’s enough.  We’re moving to Western New York.”  And it ‘just so happened’ that they would move to a little village called Palmyra.

The beautiful home shown in the January calendar is the last extent home of the Smiths in New England.  It is located just to the north of the village of Norwich on Turnpike Road.  It is privately owned and is little known by members of the Church.  Here, young Joseph Smith was hobbling around from his leg operation for the entire three years on crutches.  Here, Don Carlos (eighth son and 10th child) was born March 15, 1816 (just 86 days before the first unseasonal ice storms hit).  Here, the Smiths had three successive years of crop failures.  From here Joseph, Sr. would leave to go find lodgings for his family in the fall of 1816.  From here, Lucy would leave sometime in November or December 1816 with her eight children: Alvin, eighteen; Hyrum, sixteen; Sophronia, thirteen; Joseph, ten (who was still on crutches); Samuel, eight; William, five; Catharine, four; and Don Carlos, eight or nine months old.

Now as you look at this photograph throughout the month of January 2021 and begin your intensive studies of the Restoration and the Doctrine and Covenants, you’ll know a fair amount of “the rest of the story about this home.”

You can order your 2021 Church History Come Follow Me Calendar by CLICKING HERE.

I wanted to capture the feeling of a hard winter storm on the Norwich Smith home, but have a sunny day to represent summer.  I had been to the site a number of times, but mostly in the fall.  This particular shoot was in the dead of winter.  I remember it so well because it was 4 degrees below zero (Fahrenheit) with a wind chill of 18 below zero.  I did not have gloves and my camera was absorbing the cold too quickly.  My fingers actually started aching in a way I had never felt before as they became colder and colder. They nearly stopped functioning for the fine work of focusing and aperture control.  Fortunately, the camera took the cold better than I did and survived while my fingers hurt for the next two or three days from the exposure.You can order your 2021 Church History Come Follow Me Calendar by CLICKING HERE.