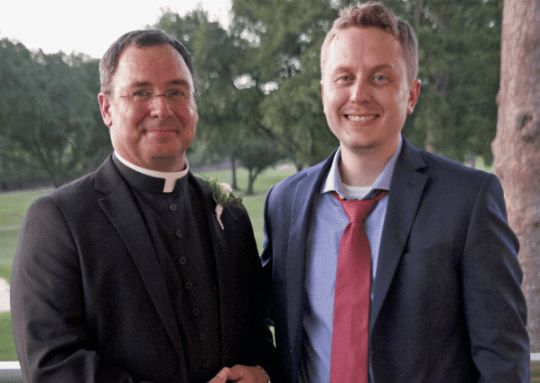 Pat Broussard answered a knock at his door in 2002 to find two Mormon missionaries standing there. What happened next surprised his visitors.

“I looked at them and thought: ‘You boys look hungry. Come on in. I’m going to feed you,’ ” Broussard said. “There was something about them that said, ‘Let them in; talk to them.’ ”

By the time they left, Broussard had begun an unusual faith journey. And missionary Andrew Blackwell missed on winning a convert but gained a lasting friend.

On May 27, Broussard, 56, and Ryan Hallford were ordained Catholic priests by Bishop Robert Muench, of the Diocese of Baton Rouge. In the audience was Blackwell, who returned to Louisiana from Utah to offer support.

“I promise you, you will never see it with a Mormon and a Catholic the way this has unfolded,” Blackwell said. “Pat is my brother. I love Pat as much as any man can love someone he’s not related to. He’s one of the best human beings I’ve ever met in my entire life.”

When they met 15 years ago, Broussard was a married father of two. His wife, Aminthe, had been a teacher before deciding to enroll in LSU’s Paul M. Hebert Law Center. Broussard was in New Iberia getting the house ready to sell to join her in Baton Rouge when the Mormons came knocking.

Broussard admitted to the missionaries that he was not especially devout. They challenged him to explore a deeper relationship with God. Although they wanted him to do so through the Church of Jesus Christ of Latter-day Saints, Broussard said he never felt pressured.

“What I experienced was they were more interested in my eternal soul and cared about me as a human being, which resonated with me,” Broussard said. “They taught me a lot about their faith, but they never put it to me as though, ‘You have to believe this or you’ll never be in heaven.’ ”