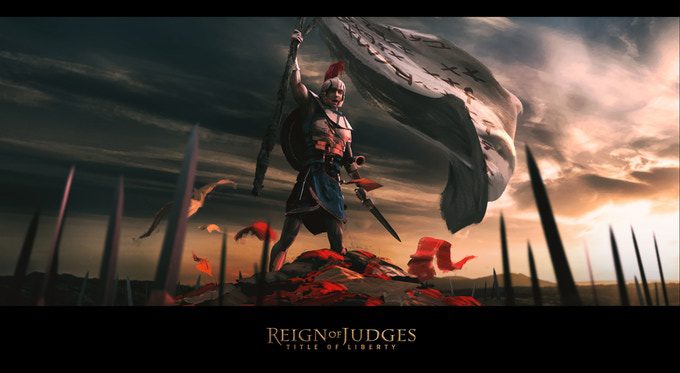 Millions of Book of Mormon readers, inspired by the message of heroism and morality in times of war found in the Book of Alma, have likely had the same thought: “This would make an amazing movie.” I know I’ve had that conversation with countless family members, friends, and missionaries. The high drama, the relentless action, and the timeless message of standing for freedom, family, and faith have all the makings of a Hollywood epic.

Now, it may actually happen.

Darin Southam is a talented filmmaker who plans to do the story justice. Best known for playing the titular hero in director T.C. Christensen’s pioneer epic Ephraim’s Rescue, Southam has poured his focus and passion into preproduction on Reign of Judges: Title of Liberty, the first of a planned trilogy covering the war chapters of the Book of Alma.

This will not be some low-budget production that Latter-day Saints need be embarrassed by. Southam and his crew have contracted with the team that created props and armor for Wonder Woman and Gladiator to create a high-quality realism. This film will inspire the values of Moroni in viewers of all backgrounds. It will increase interest in The Book of Mormon. It will, in itself, be a call for audiences to rally around the Title of Liberty here and now.

But it won’t get made without our help.

Many Hollywood success stories start as high quality short concept films to help studios “get the vision.” Critical and commercial hits like Napoleon Dynamite, Frankenweenie, Deadpool, Office Space, and District 9 started out this way. Audience (and online) enthusiasm for a project can ensure that it will be greenlit, as was the case with films like Deadpool and Serenity.

Southam and his team are currently raising money to produce a Hollywood-quality concept short film in order to successfully pitch a planned trilogy. They’ve started a Kickstarter campaign with a goal of $150,000. That will be enough to make their short film centered on Moroni; if they raise $300,000 they can create enough armor to stage impressive battle scenes with solid visual effects. If they raise $1M they’ll be able to create a short film with the scale of a Lord of the Rings or Game of Thrones battle scene that will really sell their vision.

How bad do you want to see the story of Moroni done justice on a big screen? How much do you want to share it with your friends? I, for one, would love to see a film based on The Book of Mormon get the epic treatment of a Hollywood biblical epic, done by someone who loves and honors the source material. Help this film get made. Visit the Kickstarter campaign (which launched as the #2 campaign on the entire site!), learn more, give, and spread the word. Let’s get this trilogy made. We only have until September 14th to raise the money. Let’s do this thing!

Jonathan Decker is a licensed marriage and family therapist and CEO of Your Family Expert. He moonlights as the “Mormon Movie Guy,” reviewing Hollywood films from a Latter-day Saint perspective. He offers daily Gospel insights in his Facebook group Ask a Mormon Therapist.

As for the rating, here is a link of great war movies with PG-13 rating: https://www.ksl.com/?nid=1205&sid=45086173 Accuracy? Yes, better be accurate. Anti mormon will be so picky of every think they can find. Just look what they said about God of Egypt. If it come out, I hope it get internationally translated (Italy!)

Am I getting that right, that Southam intends to use a North American setting for the movie? That is such a waste - to take a great idea and then tie it to this bogus, discredited Heartland Book of Mormon theory. I might have been disposed to contribute but just lost all interest.