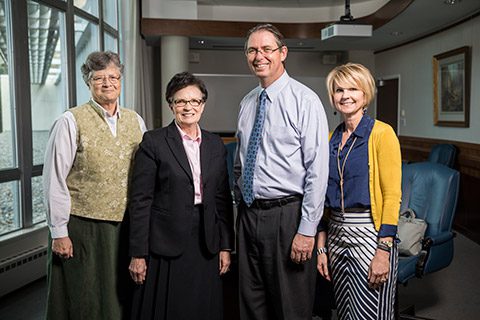 Following the recommendation of the Advisory Council on Campus Response to Sexual Assault, the university is conducting what’s known as a campus climate survey.

Conducting research regarding perceptions and incidents of sexual misconduct will provide BYU with vital information that will guide its efforts to create a safer campus. The survey is scheduled to go out to students on March 14.

Professor Ben Ogles, who is a psychologist and dean of the College of Family, Home and Social Sciences, led a subcommittee of research and content experts on the survey design. Ogles talked with University Communications’ Joe Hadfield about how this survey will help the university better understand the campus climate on the issue of sexual assault.

How does a campus survey help efforts to eliminate sexual assault at a university?

First of all, you find out what the incidence of sexual assault is among students. We find out how many people are assaulted and then we find out the characteristics of those assaults.

For example, are the people perpetrating the assaults affiliated with BYU? Are they students elsewhere? Are they people in the community? Where does sexual violence happen? Are drugs or alcohol involved? Do those who are assaulted tell anyone? Where do students go for help if they are assaulted? What prevents them from reporting an assault?

These kinds of questions help us understand what is happening among our students. Until you know all the details, how can you effectively intervene? Which intervention would you pick? In order to intervene effectively we have to have that kind of information.

Have other universities done this? Any that you’d say are similar to BYU?

Dozens of universities have done this. Notre Dame, a religious institution that’s similar to us in size, has done it twice now. The University of Utah conducted one in January 2016 and released its report last fall.

Will you try to model BYU’s after any of those?

We used the Department of Justice’s Campus Climate Survey Validation Study as the main source. We also looked at MIT’s survey and another developed by the American Association of Universities among others.

We brought in Dr. Lindsay Orchowski, who is from Brown University and consulted in the creation of the AAU survey. She recommended that we tailor it to our particular circumstance. She looked at what we were starting to do, reviewed our first draft and made suggestions to alter it to fit our climate at BYU. So, we have modified some items. For example, we have a question about the honor code and its potential influence on reporting.

What are you looking to learn from the survey?

We get basic data regarding the incidence of sexual assault and other forms of sexual misconduct – stalking, dating and intimate partner violence, and sexual harassment.

We also learn about a variety of factors that are associated with incidents of sexual assault.

Finally, we learn about the attitudes of students and the degree to which they are informed about sexual assault and BYU policy – what we call campus climate.  What are the attitudes of students and what are their views about the campus? Do they think that the university is interested in their well-being? Are they informed? Have they participated in training that’s related to sexual assault or not?  Do students come with attitudes about sexual assault that are helpful or potentially risky? There are a number of elements of climate that we take a look at, but we want to assess the degree to which various attitudes exist.

Why is it happening now?

The literature recommends that you administer a campus climate survey at the end of the winter semester, after first-year students have completed most of their first two semesters.

How will BYU conduct the survey?

It will be an Internet-based survey. That’s the way most universities have done it. The survey will be open for six weeks so as many people as possible can take it.

How many students will participate?

We are going to survey all students taking 6 or more credits on campus. So, all of those students will receive the survey through an email link. They have to be 18 years or older, too.

Our institutional assessment office tells us that they typically get a 50-percent response rate when they survey our student body. We are hoping to get higher than that because this is such an important topic. We hope students want to help us address this issue through the survey.

Will the results be made public?

The university plans to make a summary of findings public during fall semester.

With this topic, are there concerns of underreporting?

There are steps that we have taken to try to increase rates of reporting. We have procedures in place to de-identify the data so that students’ names will not be attached to their responses, thus freeing them to be open and honest without being identifiable to the university or to anyone else. As a recommended “best practice,” we are also using an incentive for participation – there will be a drawing to win 1 of 100 iPads.

Getting a clear sense of something as personal as assault can be difficult, but you’ve got to do something to gather that information. This is probably the best way to get an estimate. The survey instrument is based on one that has been tested with thousands of students at other schools already. Other people doing these surveys suggest they get reasonable response rates.

Will this be a one-time survey or a recurring thing?

We’ll start with this one. The idea of the advisory council and the committee that developed our campus climate survey is that you need to administer it over time to see if you are making a difference. Most institutions don’t do it every year. Every other year or every third year would be more appropriate.

Beyond the data that you gather, what’s the value of doing a survey like this?

You can’t underestimate the educational component of this. If I have a student that takes this survey and they know nothing about sexual assault in the first place, they will come away with greater awareness just by taking the survey. They’ll know the university takes this seriously and that we want their feedback.

Anything else?
Most conversations about sexual assault revolve around men assaulting women, but we’ll find out from the survey about the incidence of sexual assault among all of our students.

Conducting a campus climate survey is valuable because we want to know whether people are being assaulted and where, what the circumstances are and at what frequency so that we can have good information as we make decisions about how to intervene.  Ultimately we want to help keep our students safe and good data helps us to make improvements that we hope will make a real difference.

I have mixed feelings about this. On one hand, I absolutely agree that sexual assault must be eliminated from BYU campus and that victims of sexual assault must be treated with love and respect. However, it is also true that some sexual assaults are, indeed, the result of failure of all parties involved to adhere to the honor code. To the students who think the honor code is "old fashioned" and "out of touch", I would remind them that there are literally thousands of people who would love to attend BYU and would be more than willing to adhere to the code. If you find the honor code too restrictive, I would respectfully suggest that you attend a different school where you would feel more comfortable and thereby create an opening for a student who genuinely wants to attend BYU and abide by the principles set forth in the honor code.