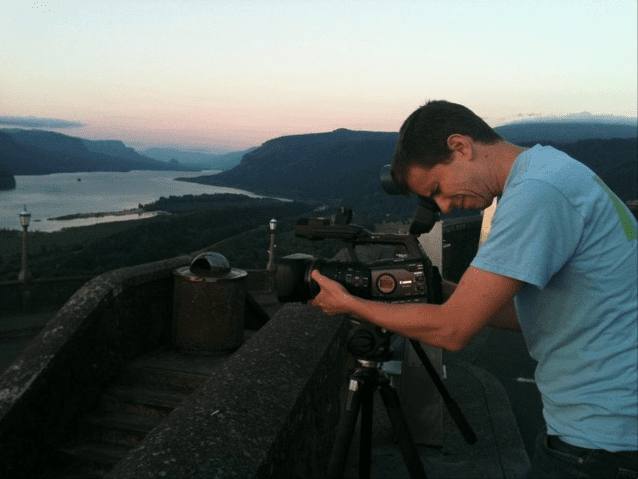 Years ago Daniel, a former pre-med student and social worker, visited a friend in Moab, Utah. He decided to stay, committed to life without the use of money, and for a time took shelter in a cave. His thoughts on home: “Wherever we are, that’s who we are. That’s home.”

Xong moved to Wisconsin as a child Hmong refugee after the Vietnam War. In the years that followed she experienced “a lot of racism, a lot of discrimination” there, but as an adult is determined to help her local Hmong community cope with trauma and rebuild and embrace their identity.

Clay left his Tennessee home after his son’s suicide and found meaning in helping the people in his Nevada trailer park. “Nevada is my home now,” he said, “and it’s gonna be my home until Nevada kicks me out.”

Daniel, Xong and Clay are three of the people featured in Brad Barber’s new short-documentary series, “States of America.” For the series, the Emmy-nominated theatre and media arts professor is featuring one person from every state in 50 four- to five-minute films. He launched the series online a year ago and has been releasing one documentary per month since.

The short films “provide an opportunity to listen to and understand lots of different types of Americans in diverse corners of our country,” said Barber, who was named one of Variety’s 10 Documakers to Watch in 2015. “At a time where we are increasingly divided, this kind of empathic experience feels more urgent now than ever.”

Barber was born on the 4th of July and has “always felt a deep-seeded connection to the United States.” He has lived in California, Tennessee and Utah, and said despite the vast differences in each place, he has strongly identified with the distinct landscapes and heritage in all three. His new series asks a range of questions about how where we live affects who we are and how we identify ourselves.

“Increasingly in this country, you’re born in one place, you go to school in another place, you go to work in another place. Many times in your life you are reorienting or maybe realigning yourself with a new community and new culture,” he said. “And the United States is so vast and so diverse, I really liked this idea of examining how we identify with the place where we live now, whether we were born there or not.”

The series is an ambitious follow-up to Barber’s documentary feature directing debut, “Peace Officer,” which he produced, directed and filmed along with Scott Christopherson. That film, among other recognition, won the documentary feature grand jury and audience awards at the 2015 South by Southwest Film Festival, eventually landing in theaters around the country, before a nationwide broadcast on PBS’s acclaimed documentary series “Independent Lens.”

The States project is one Barber has wanted to tackle since he was a film student at the University of Southern California. In 2009, two years after joining BYU’s faculty, he started taking his camera with him in his backpack when he traveled to a new state for a conference or vacation, and filming subjects “really barebones style,” alone, with a friend or with his wife and frequent collaborator, Susan Krueger-Barber.

The people featured in the films aren’t meant to be representative of their entire state; Barber said he considers the project more story than census driven.  “Once you watch a few of these in a row,” he says, “a larger mosaic portrait begins to take shape of our nation’s famously emerging identity.”

With 26 shorts filmed, 25 edited and 15 released so far, the project is ongoing. At BYU, Barber mentors students in an advanced-level theatre and media arts experiential learning class with just three or four enrolled at a time. Each student is assigned one state to edit for the project, collaborating with Barber in a model he developed from his professional work in Los Angeles before teaching at BYU. He also works with former students who occasionally film in the field and in turn help give feedback to the current students’ cuts.

Kelton Davis, a recent media arts studies graduate, took the class in 2015 and edited the Rhode Island film. One challenge? “Taking this man’s 80-plus years of life experience and choosing the parts that would most reflect his connection to the state.” And a benefit? “Being a small part of a very large and ambitious project that involved so much collaboration,” Davis said.

The films can be viewed now at StatesFilms.com, and Barber is currently in talks regarding additional distribution options. He hopes that, like “Peace Officer,” the short docs could be used in educational programs across the country to encourage discussion “about diversity and how we interact with ‘the Other,’ as well as things we have in common about how we connect to our physical and cultural environment.”

Brad was in my ward in Tennessee. He is so talented! Can’t wait to watch.