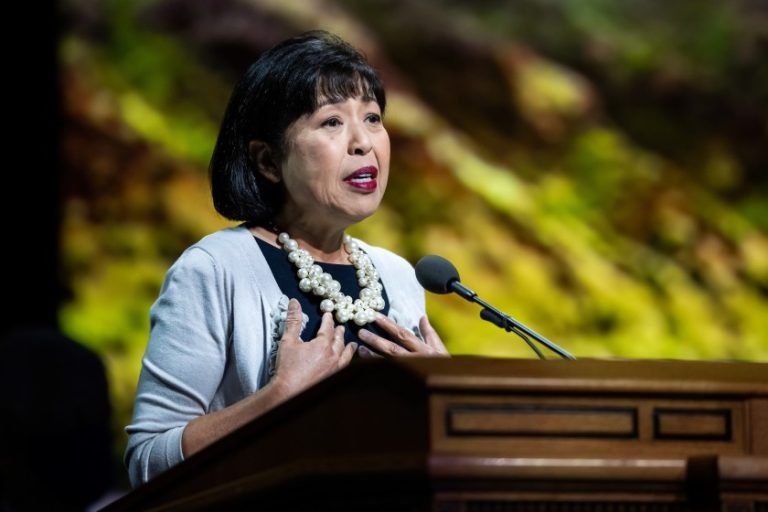 Niwako Yamawaki, a professor of psychology, delivered Tuesday’s devotional address. She told the story of how she discovered God and used her faith to understand, endure and even appreciate pain.

“I know for sure that I can keep pushing forward on my journey because I know that God lives and that God loves me,” Yamawaki declared. “The next step and challenge for me is to answer this question, ‘Do I love God?’”

When we focus our efforts on knowing that God lives and loves us, Yamawaki believes we can take “up our own crosses of suffering,” consequently “find[ing] our own selves” and lifting the burdens of those around us.

For Yamawaki, however, reaching this realization took decades. Her journey toward God was not an easy one.

“[As] a 14-year-old girl raised in a predominantly non-Christian country, it was difficult for me to truly feel and grasp what God’s love was.”

However, the examples of one self-sacrificing missionary, Elder Arnett, stood out to her. His family had limited means and his father passed away during his mission. Despite his circumstances, Elder Arnett decided to stay and teach the people of Japan.

“His powerful example impressed my teenage heart, soul and mind, showing to me clearly the loving nature of the God and the sacrificial devotion of the Jesus that he so earnestly taught me about,” Yamawaki said.

Through Elder Arnett’s example, Yamawaki learned that there was a God who loved her dearly. This became a fundamental part of her testimony and helped her navigate pain and suffering that she frequently encountered as a convert and, later, immigrant.

Yamawaki’s testimony of God and her Savior further developed as she followed a prompting to immigrate to America. She left behind a life of comfort, her family and respect to enter a country where she felt “less than special.”

“No matter how much I worked, I felt like just a token minority and sometimes even a completely invisible person,” she recounted. “I lost my confidence and self-worth and felt as if even God might not care about me since other people thought that I was nothing.”

She witnessed more pain as she worked with a fellow Japanese immigrant in a Salt Lake City shelter for women and other victims of domestic abuse.

As a professor, Yamawaki was again surprised and saddened to hear about unfair experiences of her research assistants. Her experience as a psychologist and her testimony of God encouraged her to research “why domestic violence happens, how we can stop it and … the best ways to assist its victims.”

As a domestic abuse researcher, immigrant and convert, Yamawaki is well acquainted with grief. However, this has not dimmed her testimony of God’s existence and the unconditional love of Him and His Son.

When we feel wounded by unfair circumstances or people, Yamawaki suggests remembering that Christ “decided to keep His scars because He wants us to know that He also suffered and experienced so much pain.” Our Savior carries physical examples of His suffering for our pain to remind us that he loves and understands us.

As Yamawaki thinks about the Savior’s all-encompassing Atonement and His choice to bear reminders of that pain, she feels peace, comfort and reassurance that “God exists and loves us all, no exception.”

Rick Jellen, Associate Dean of the College of Life Sciences, will deliver the next devotional address.