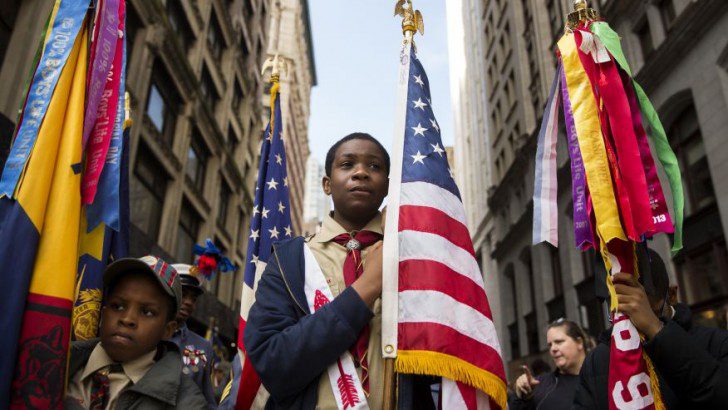 The president of the Boy Scouts of America, Robert M. Gates, called Thursday for an end to the organization’s ban on gay adult leaders. “I truly fear that any other alternative will be the end of us as a national movement,” Gates said at the Scouts’ annual national meeting.

Gates said that he was not yet making a formal proposal but that the organization should take up the issue formally at a future meeting. “We must, at all costs, preserve the religious freedom of our church partners to do this.”

Gates said, “the one thing we cannot do is put our heads in the sand and pretend this challenge will go away or abate. Quite the opposite is happening…. We can act on our own or we can be forced to act but, either way, I suspect we don’t have a lot of time.”

Two years ago the BSA leadership voted that no youth would be denied membership on the “basis of sexual orientation or preference.”

The Church of Jesus Christ of Latter-day Saints responded Thursday to the announcement by issuing the following statement:

We have noted the comments by Boy Scouts of America President Robert Gates in relation to possible policy changes in the Boy Scouts of America. The Church of Jesus Christ of Latter-day Saints will, of course, examine any such changes very carefully to assess how they might impact our own century-long association with the BSA.

If being a scout leader you have to be morally clean and adhere to the law of chastity, what is the problem with a man who experiences SSA being in a leadership position? If active in the church and adhering to the covenants he has made, why does his sexual orientation make him less worthy? less able? and more likely to molest a child? Some of the comments on here have been almost on the verge of hysterical. As LDS, we invite ALL to come unto Christ. Why does having SSA make anyone less worthy than being straight? In fact, considering the immense faith these active LDS men demonstrate, we could learn a lot from them as can our youth. My daughters EFY councilor experiences SSA and was the most wonderful guy you could meet. My husband also experiences SSA. we have 5 children and he has served diligently as YMs president on and off for years and has been an asset to our ward and the young men in whom he has served so well. He has served on the bishopric, ward mission leader, HPGL, and various other callings. How dare we judge another when we know nothing about them other than their sexual orientation, actually, how dare we judge another, period! I assume those of you who have issues with righteous, covenant keeping "gay" people are perfect? no, thought not.

This is a misleading headline. The president of BSA did not CALL FOR an end to the ban on BSA gay leadership. He said it was inevitable, but he did not call for it. He is right. It is inevitable. So now the leadership of the Church will decide how we deal with that--one of many decisions we as the Lord's Church will have to deal with in the coming months and years. Hold on people, it's going to be a bumpy ride.