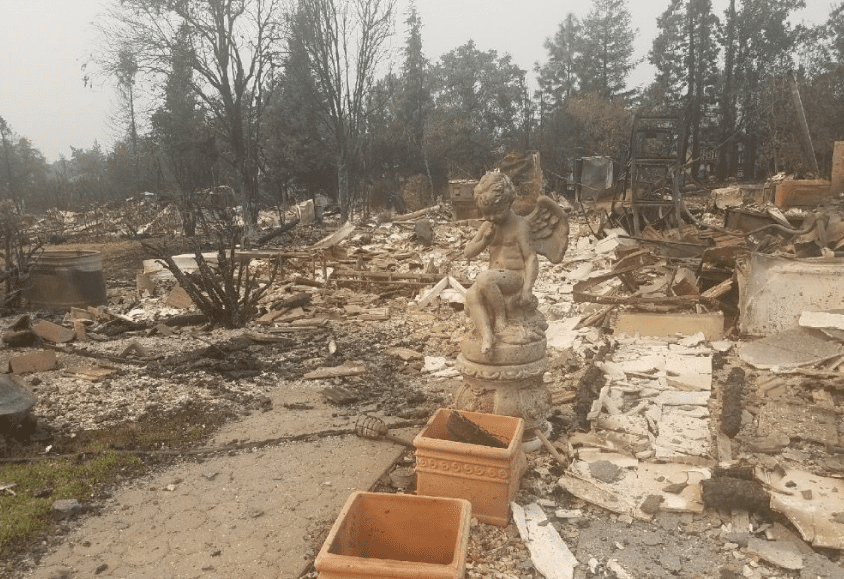 The question of which of your possessions you would save at a moment’s notice is a hypothetical that frequently arises in social settings. But for the members of the Church in the Redding California Stake this past week, the question became all too real as a wildfire, dubbed the “Carr Fire” tore through their community destroying at least 20 homes belonging to members of the Church. The fire is still ablaze and has burned more than 154,000 acres and destroyed over 1,600 structures making it the 6th most destructive wildfire in California history.

It was started when a trailer being pulled along Highway 299 got a flat tire, a fairly insignificant incident, but when the metal rim of the wheel hit the asphalt the resulting sparks quickly took the moment from commonplace to catastrophic for the entire region.

Though the fire is currently only 43% percent contained and the losses have not been insignificant, members of the Church are coming together in the midst of this difficulty and many are already seeing the blessings that have come from this disaster.

“[The loss of homes] is so much smaller than it could’ve been,” said Sheri Gordon, the Relief Society President of the Sundial Ward. Many of her wards members live in the same two neighborhoods and flames had grown close to a hundred feet and were threatened from just across a street as the people in each were evacuated. They looked back at their homes certain that it would be the last time they would see them, but somehow not one of the homes in those two neighborhoods was destroyed.

That’s not to say that those who did lose their homes haven’t also seen miracles. “The Lord is sometimes miraculous in what he saves and sometimes the miracles are in what is lost,” said Gordon. “That’s when the people come together and hearts are softened.”

As is often the case, LDS Church buildings have been used to support those that have been evacuated or displaced by the fire, but in addition, members have opened up their homes to one another. A season of great destruction has become an opportunity for great connection. Families who may not have known one another well before are getting the chance to be there for each other in a time of great difficulty and stress. Before they may have passed in the halls of Church without looking up and now they share meals at the same table.

One sister expressed the feeling that she didn’t realize there were so many people that cared for her well being until the fire came. Other families that knew of neighbors that were out of town contacted them and went in to their homes to retrieve important documents and valuables on behalf of those that were far away.

Novelist James Lane Allen said, “Adversity does not build character, it reveals it.” The adversity of this consuming blaze has revealed great things about the character of the people in this community.

One former bishop was woken at 2:30 in the morning by an evacuation call. He initially ignored it, wondering who would bother him in the middle of the night, but a neighbor came and woke him. He quickly noticed the people across the street showed no signs of packing up. They were a little rough around the edges and he didn’t know them well, but he approached and asked them their plan.

Their answer revealed that they didn’t have a car, so they figured they would just wait and if they saw flames coming, they would run for it. He gave them the keys to his van and asked whether they would help him by moving it while he drove another vehicle. Once they were all evacuated, he allowed them to keep the keys, keep the van, and keep in touch so they would have a way to get around as they waited for news and potentially prepared to start over.

One member of the Sundial Ward had a baby during this time and when it was posted on the Relief Society page, people were quicker than usual to gather around and rejoice in welcoming this new life (and joke about how they hoped her personality wouldn’t be as fiery as the day she was born). Here was a different kind of spark entirely, something that brought in a little extra light and hope.

Social media was also the means by which one family had several photos returned to them, including a half-singed wedding photo that was found on a roof some ways away. That family had lost their entire home. What a simple, but important gift it must have been to have a few precious photos saved and returned.

“The Lord uses different forms of trials to help build us,” says Sister Gordon, “I know that these families who have lost [so much] will have hard times, but they don’t seem to be bitter toward the Lord. They feel that people care about them and they feel that the Lord cares about them as an extension of what other people have been willing to do for them.”

What remains of this home is in the picture at the top of the page.

This continuing ordeal has been an unprecedented opportunity to put the new ministering program to work. One sister who lost her home entirely was still checking on her ministering sisters and sending updates of what she learned to the Relief Society president, even though she was no longer staying in the community and didn’t plan to ever move back into the ward boundaries. It wasn’t about an assignment for her; it was about caring for and being aware of these women that have become her friends.

Likewise, just as ministering encourages us to be led by the Spirit in how we serve, so too has Sister Gordon, in her capacity in Relief Society, had to tailor her relief to the varied needs of the sisters and families in her ward. Some of the people don’t feel up to talking yet, some want to talk and talk. Some want donations, others don’t want anything but space to be able to process all of this. Something like this is life-changing and devastating and emotional and temporal recovery doesn’t come in an instant.

“We realized how much we need to listen to the Spirit for each individual,” she said, “We’ve really felt that we need to pray more about it so we can match that individual with what they need…we can’t do just what we think is the best way to approach this. Everybody is an individual and they handle the stress differently.” The same is true in all of our communities as we try to adapt and adjust to being “ministers.” No matter the struggle, there is no one-size fits all approach to bringing aid. Only by being close to the Spirit and open to revelation can we know how and when to reach out to those around us.

Fred Rogers said that in times of conflict and disaster, his mother always told him to “Look for the helpers.” The miracles in this fire haven’t come in the form of being able to turn the flames away or stop any damage from being done. The miracles are in the helpers. Though none of us wants a literal trial by fire, the Lord can make any difficulty be for our good. And at least some of the good in this is coming in the form of a community of saints that are becoming bonded in a way they might never have been otherwise.

Our prayers are with all the people in the path and in the wake of the Carr Fire. And knowing that their caring and prayers are also with each other shows that the Lord is already doing his work amidst the ashes.

My husband is a pretty knowledgeable man and he keeps reminding our family to check the air in the tires on the trailer. The wrong pressure can cause the tires to over heat quite quickly and that can cause them to blow resulting in lots of really difficult problems, from fires to broken parts on the trailer and it even causing a wreck and that can be life threatening. The fire has surely been that also

My heart goes out to all those families experiencing losses, griefs, and other troubles caused by these California fires. May you all be especially supported in the coming days by God's love and the love of your extended families and friends. To "Craigs List" ... you know miracles don't have to be grand, right? There are so many "small miracles" happening every day, both near at hand and far away. So, what's a miracle? According to one definition, "a miracle is an event not explicable by natural or scientific laws." The definition says nothing about size. How can we know a miracle, small though it may be, when we see one? We have to keep our eyes open and be watching. Think about your own experiences ... has anything improbable, coincidental or synchronistic ever happened to bring you into contact with an important person in your life? What unexpected events may have enabled you or someone important to you to survive an accident or medical crisis or have a special adventure? Looking back, has help ever arrived "out of the blue" just when you or someone important to you needed it most? These are just some small examples of what I'd call "miracles", things that can't be explained away easily or put down to natural or scientific laws. "Finding the miracles" is all about the kind and focus of the lens we use to examine the world around us.When I can't see the miracles, then I know I need to get a new lens.