Orphans, Church History, and Intrigue in the Lightning Tree 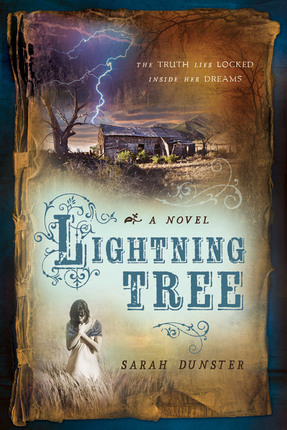 Lightning Tree by Sarah Dunster is filled with mixed messages. It’s a compelling early Church history story, but leaves a few holes. Ten-year-old Maggie, along with her little sisters and an older brother, were orphaned when their parents didn’t survive an arduous journey across the plains to Utah. The brother was sent to live in a different community than his sisters, who were taken in by the Arden family in Provo. The story begins four years later when Maggie discovers a mattress that had belonged to her mother on her foster parents’ bed after she had been told all of her parents’ belongings had been sold to pay for her father’s care before he died.

Maggie is treated like a servant in her foster family’s home and her younger sister Giovanna is allowed to run wild, neither girl is sent to school, and both wear clothes that are outdated and too small. She is given the heaviest, dirtiest jobs to do and finer skills such as sewing go to her two foster sisters. Ma Alden frequently reminds her she won’t ever marry and she only has a life as a laundress or a servant to look forward to. She and her younger sister are often the objects of Ma Alden’s nephew’s sadistic tormenting. Pa Alden is a kind man but subservient to his domineering wife and her bombastic know-it-all brother. Her only friend is a boy near her own age who is confusing her with a shift in his attention from pals to courtship.

Maggie is plagued by haunting dreams she can’t be certain are just dreams or actual memories. In one she remembers one of her sisters breaking a cup that had belonged to Maggie’s mother. She returns to the tumble down cabin where they had once lived and discovers the handle of the broken cup and knows Ma Alden lied about her mother’s tea set too. In a fury, she breaks into a chest in Ma Alden’s room and discovers the rest of the tea set. Some of her dreams are of the Mountain Meadows massacre, a story that is being whispered around town, but the worst dream is of her foster mother smothering a baby with a pillow. When she learns from her friend’s mother that she had a baby sister when she arrived at the Aldens and that the baby died, she begins to suspect her dream of the baby’s death is really a long buried memory. Close on the heels of the discovery that the baby was real, she rescues her little sister from the nephew who cut the little girl with a knife. She attacks the older boy and in turn is attacked by the boy’s father. Grabbing her little sister, she runs away.

The two girls take shelter with a girl and her little brothers who share their poor cabin with their cow and her calf. Food is scarce; the cabin is cold, and they live on the charity of a few kind women who give them occasional food baskets.

To proceed further with the story would include too many spoilers. However, the events that occurred near Cedar City that resulted in the deaths of almost an entire wagon train brought a witch hunt of trials by judges appointed by the Church’s detractors in the East even to towns as far away from the tragedy as Provo and Salt Lake. Dunster accurately portrays the illegal attempt by one of these judges to try any and all Church leaders, though they had no part in the event, and the disruption and fear it caused in these communities.

Much research has gone into the historical background of this book and the setting, clothing, and buildings of the era have a feeling of reality. The plot is interesting though the ending is a little too predictable. I found some of the characters inconsistent. I found Pa Alden the best developed character as a brow-beaten husband dominated by his wife and brother-in-law who has one wild burst of manhood and standing up for what is right, then sinks back down again to the quiet, submissive man he was before.

It isn’t logical that after all the lies and unfair treatment Maggie received from Ma Alden, she should so readily accept the woman’s story of what happened to her baby sister. Even though the story had been told at the time of the baby’s death, there is no verification of the events. Maggie only has her dream and the woman’s story with no actual memory to substantiate either story, yet she accepts Ma Alden’s version without question.

It seems inconsistent to me that homes were found for Maggie and her siblings when their parents died, but not for Liz Ellen and her little brothers who lost their parents about the same time and were of comparable ages. It also is odd that the Church made no organized effort to feed those children, nor was there an explanation for Maggie’s rudeness toward Liz Ellen. Church leaders’ involvement with the people in their wards is non-existent in the story.

My biggest disappointment with an otherwise well-told story is the absence of faith during the trials these people faced. Yes, there were a few admonitions to Maggie to pray, but she never exhibited any faith in God and her foster family certainly didn’t, but the story would have been strengthened if there had been more evidence of belief and reliance on their hard-earned testimonies by at least the kind, good people like Maggie’s friend and his mother. Faced with the possibility of leaving Provo with her foster family, Maggie doesn’t seem particularly concerned about leaving the Church. In spite of the author’s excellent writing skills, the story of an important time in Church history seems a little flat without a spiritual element.

Some of the problems I found with this novel may be due to reading an uncorrected and unedited advance reading copy. I often receive ARCs well in advance of a book’s release date when there are many corrections needed, but this one was particularly rough and I trust has been corrected before its release this month. In spite of the problems I’ve mentioned, this is a compelling story that will stay with the reader.

Sarah Dunster has had her poetry published in Segullah Magazine and Dialogue: a Journal of Mormon Thought. This is her first published novel. She love to read and enjoys singing and skiing. She is the mother of six children whom she is home schooling.