Can Two Friends Fall in Love? 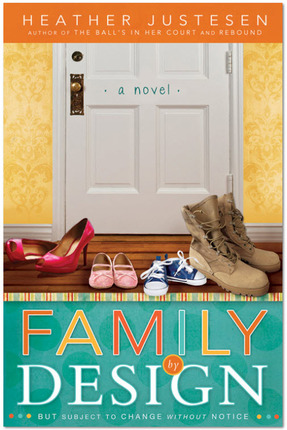 Two people with high-powered careers have been friends for ten years. He’s part owner of a protection systems company and she’s a top designer for a home and office renovation company. Being in the Marine Reserve, he faces a possible deployment. She’s in her thirties and wonders if she’ll ever have a husband and children. Though they both date a lot, they’ve never dated each other. When disaster strikes ending the lives of Tucker’s brother and sister-in-law, leaving their two small children orphaned, Tucker turns to his best friend, Rena, for help.

Family By Design by Heather Justesen is the story of two good people who have let their careers take precedence in their lives. Even though they both long for love and a family their careers have made them wary of forming deeper relationships. They like each other a lot and value their friendship, the trust they have in each other, and their shared values, but fear a romantic relationship might be the end of their friendship. When Tucker is faced with the possibility of not being able to keep his promise to his brother to raise his children because he is single and about to be deployed, the only solution he can think of is to marry his best friend. His partner can take care of their business, but the children’s only other relative, an elderly grandmother, isn’t well enough to handle two small children for a long period of time, and he’s determined his niece and nephew won’t be going into foster care.

Rena is torn between her concern for the children and Tucker and her own desire to be loved. She wants to marry, but is concerned that a marriage based on anything other than romantic love may be doomed to failure. With only three weeks to prepare for the custody hearing and facing pressing problems at work, Rena hopes their friendship can blossom into love and accepts Tucker’s hasty proposal. They barely settle into Tucker’s home with the children when he is deployed.

Facing mounting problems at work and suspicion that someone is sabotaging her work, Rena must also deal with the sole care of the two children who are six and four. The six-year-old is having serious problems at school requiring frequent meetings with his teacher and a counselor while the little girl’s pre-school is almost an hour’s drive away. Add to that a fussy client who changes her mind almost daily and a supervisor who has suddenly become highly critical of her.

Justesen has a charming way of depicting the interaction within families, including extended families. She also portrays well the pressures piled on families separated by military deployments, the demands of work, and the fears and misunderstandings that occur in blended families. She manages well the uncertainties, hopefulness, dreams, and insecurities that accompany falling in love. The mystery behind Rena’s problems at work adds extra spice to the story. This book will be enjoyed by those who like subtle love stories, family fiction, and those who like a bit of fast action and mystery.

Heather Justesen’s life is filled with a great deal of variety. She graduated with a BA in English Literature from Southern Utah University where she met her husband. They have foster parented fifteen children. She worked for a newspaper while living in Utah Valley, but since has moved back to a rural community where they are raising a conglomeration of pets. She also likes to garden and, of course, to write.