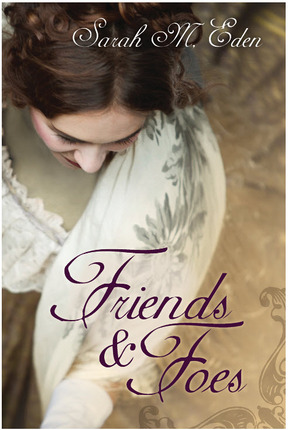 Though not exactly an LDS novel, Friends and Foes, by LDS author Sarah M. Eden will garner a great deal of favor from LDS readers and those who simply like a well-written Regency without coarse language or gratuitous sex scenes. That’s not to say there isn’t a great deal of interesting slang, cant, as it is termed in the Regency genre. There is also a generous supply of romantic tension between the leading characters.

Regency romances are set in the early nineteenth century during the period when George, Prince of Wales, was the regent monarch of Great Britain. It was a time when fashion was paramount among the elite of England, a precise code for proper conduct ruled society, and great emphasis was set on titles and social rank. Eden is a master (mistress) at recreating this time period. A Regency novel is not written as comedy, but as a serious love story set amid rules and strictures that often strike modern readers as humorous or somewhat ridiculous.

The story begins with the eldest of seven brothers, Philip Jonquil, the Earl of Lampton involved in a clandestine meeting at a country inn with another British agent. They are in pursuit of a dangerous French spy. Their meeting is interrupted by an angry young woman who accuses Philip of stealing her cane. The Earl, who hides his true business behind a masquerade of being a silly tulip, a fop, a veritable fashion plate to rival Beau Brummell, is taken aback by the young lady’s sharp tongue and engages in an exchange of insults. When they land at the same month long house party, he discovers she suffers from a serious crippling injury and is not about to forgive or forget his insults and thus war is declared between the two.

As the war between Philip and Sorrell escalates they experience a wide range of emotions. Even when they are the angriest with each other, they are never indifferent or unaware of anything about the other. While experiencing roller coaster feelings toward a certain young lady, Philip and his friend are absorbed in their pursuit of a dangerous spy which brings a strong element of mystery and intrigue into the tale.

The story is filled with an interesting cast of characters, each quite distinct. Sorrell is tactless, blunt, smart mouthed, fiercely independent, but wounded emotionally as much as physically. Phillip is confident, impulsive, a superb actor, and as a self-centered social tulip his vests and cravats are so extreme they’re laughable. Minor characters are fun too, both with their distinctive personalities and in their manner of dress.

Often Regency novels get so hung up on the strict manners of the period something is lost in the plot of the story within the era, but not so with Friends and Foes. Eden provides a well-thought out plot that in another time period would be considered romantic suspense. Though the love story takes center stage, the search for the spy and the exciting portion of the plot dedicated to resolving Philip’s case is a page turner.

I don’t often review a novel with no LDS connection, but in this case I found a strong connection to some of the values espoused by the Church such as loyalty to family, rising above obstacles, avoiding judging others, maintaining moral values and avoiding even the appearance of evil, and forgiveness. The story also weighs the merits of hope and the dangers of false pride.

Sarah Eden is a tiny bundle of enthusiasm and one of the brightest lights in LDS fiction circles. Along with being a busy wife and mother, she has three other published novels to her credit, is actively involved in LDStorymakers, and has been a Whitney Award finalist twice.