Of GRACE and CHOCOLATE by Krista Lynne Jensen | Meridian Magazine

Of GRACE and CHOCOLATE by Krista Lynne Jensen 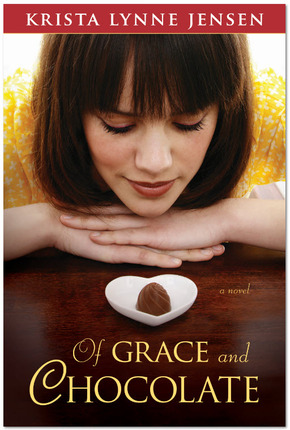 Of Grace and Chocolate by Krista Lynne Jensen starts out like hundreds of other romances with a silly, childish prank and a career oriented protagonist, but it does get better, a whole lot better. Jillian Parrish isn’t interested in romance. Her one big crush happened eight years ago when she was a junior in high school on a trip to Costa Rica. She fell hard, but the guy never called her after they returned to their respective homes in different states. She’s suffering, too, from the aftermath of growing up in a dysfunctional family with an alcoholic mother, a father so absorbed in caring for his wife he has little time for his daughters, and a younger sister who messed up her life with drugs and ran off with a disreputable boyfriend.

Jill works for a publishing house and gets a chance to have her manuscript read by a top editor. That chance is wrecked by Scott’s prank, though Scott does his best to salvage the opportunity for her. He works for a competing publisher across the street from hers. He’s also in her ward and has moved into his brother’s apartment a short distance from her apartment. She tries to discourage his overtures, but he seems to show up everywhere she goes.

After a devastating day at the office, she returns to her apartment to find a surprise visit from her sister whom she hasn’t seen for years. Her sister has an eight month old baby and Jill believes they’ve arrived to stay, but the following morning she discovers her sister has disappeared, leaving behind her baby. Soon the police are involved as well as her bishop and his wife. It becomes apparent someone sinister is after Jill’s sister and neither Jill or the baby are safe. The bishop and his wife spirit them away to their beach house where Jill discovers Scott and his parents are the closest neighbors.

It soon becomes clear Jill is more hurt by Scott’s failure to recognize her and his failure to contact her after their meeting in Costa Rica all those years ago. He admits he lost her contact information and all is forgiven. From this point on the romance develops rapidly and the story splits into a search for Jillian’s sister and the pursuit of the sister’s pursuer.

I like this new writer’s style; she makes the story close and personal, uses language well, and shows a great deal of talent. She builds excitement well and writes knowledgeably about several issues. There are aspects of this story that disappointed me, however. The story is too dependent on coincidences. I can accept that Jill and Scott were perhaps destined to meet again, but so many times? Having Trey, Scott’s brother, connect with the sister is a little far- fetched. I had a hard time accepting the immediate connection between Jill’s father and the baby when he’d always been so distant from his own two daughters. And after the buildup, the resolution scenes aren’t what they could be with one too dependent on chance and the other too far removed from the protagonist.

Chocolate doesn’t really play a major role in this book, but is a nice little symbolic gesture at several points. Grace is discussed more thoroughly, leading the reader to evaluate assigning blame, forgiveness, and understanding along with the role grace plays in letting the past go.

Of Grace and Chocolate is entertaining, holds the reader’s attention, and brings up some serious questions. Though there are aspects I found disappointing, overall I enjoyed reading the book and look forward to this new author’s next book.

Jensen grew up in Washington State and currently lives in Wyoming with her husband and four children. This, her first novel, was inspired by her own mother’s struggle to fight a childhood marred by parental alcoholism and Jensen’s love for the Oregon coast.