In 1912, adjacent to Granite High School in Salt Lake City, Utah, Thomas J. Yates assumed the challenging task of organizing and teaching the first seminary class of The Church of Jesus Christ of Latter-day Saints (Mormon). Yates, a Cornell University trained engineer and a power plant employee, rode his horse at midday from his full-time job to teach the 70 students enrolled in the fledgling program. 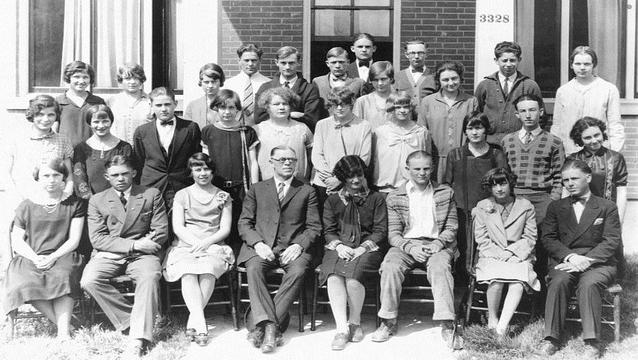 Yates recognized the demanding nature of the new educational pursuit. “This was a new venture,” he stated in his autobiography. “It had never been tried before. We could see wonderful possibilities; if it were successful it would mean a complete change for the Church.”

Yates was correct in his prediction, and Elder Paul V. Johnson, Commissioner of the Church Educational System, concurs.

“The most important factor in the 100 years of seminary is the hundreds of lives it has touched over those years,” Johnson adds. “It is the individual lives that have been affected as young people have a chance to learn the gospel and to apply those teachings in their lives.”

Seminary, or the study of religious history and scripture among high school students, grew from the original 70 students in one location to nearly 370,000 enrollees in more than 140 countries today. Students study four years to complete the program; courses include Old and New Testaments, the Book of Mormon and the Doctrine and Covenants and Church History.

“The curriculum gives students a chance to understand sequentially what the scriptures teach,” says Chad H. Webb, administrator of Seminaries and Institutes for the Church. “They discover the stories, the people, the backgrounds and the history of those volumes of scripture. It’s a process that allows them to find answers to questions in their own lives.”

Contemporary students study Church scripture and doctrine in a variety of methods.

In geographic areas with high concentrations of Church members, a “release” from the regular public school curriculum is legislatively granted and students attend seminary as a part of a normal school day. In communities with fewer members, students generally attend daily or early morning seminary classes, courses taught prior to the regular school day and often beginning by 6:00 a.m. Some students attend seminary classes after school. Another option, in remote areas, allows enrollment in a home study course where students prepare their lessons independently.

Scheduling time for seminary requires sacrifice on the part of the students, explains Elder Johnson. “In the early morning settings or after school settings, they have to give up some time outside of their school day to get up early and study and to be involved, and students who register for released time sacrifice one of their academic courses at school to enroll,” says Elder Johnson. “That sacrifice is a powerful tool to help mold and to shape their lives.”

Such dedication to religious study seems unusual in the contemporary teenage world, but it demonstrates the strong foundation that results in the lives of Mormon teenagers. A recent Pew Forum study found Church members tally some of the highest scores in the United States when describing core teachings and history of religion, including knowledge of the Bible.

Individual examples, such as former competitive surfer Sean Kimball of Laguna Beach, California, illustrate such dedication. When surfing practice and early morning seminary offered conflicting schedules, Sean chose to continue his surfing, attending seminary on occasion. But Sean realized when he missed seminary, his days “weren’t as good,” he told the Church News. After a year, Sean decided to switch early morning surfing with regular attendance at seminary. “I knew seminary was more important than surfing,” he said. “I’ve never regretted making the decision to put seminary first.”

Eventually Sean was able to resolve the conflicting time commitments to resume surfing as well. An understanding coach scheduled Sean in surf heats and practice later in the morning allowing Sean to pursue both interests.

Sean is now serving a full-time mission for the Church in the Dominican Republic.

Highly recruited basketball player Jabari Parker of Chicago, Illinois, currently attends daily early morning seminary classes and then begins a regular school day followed by an intense basketball practice and game schedule. An article that appeared in the New York Times explained how Jabari’s dedication to attend seminary – where he was studying the Old Testament at the time – helps him on the court and in everyday life:

As the accolades and adulation mount – along with the stakes and scrutiny – Jabari said he relied on his religious faith to buttress his confidence. He recalls the Genesis account of Abraham’s willingness to obey God’s command to sacrifice his son Isaac, a sacrifice cut short by divine intervention.

“It shows how strong his faith is, that he’s willing to do anything,” Jabari said of Abraham. “I use that as an example in life and in basketball.”

“In some ways,” says Chad Webb, “seminary hasn’t changed a lot in the 100 years. Elder Joseph F. Merrill, who was a faculty member at the University of Utah, a Church leader in the Granite High School neighborhood and the pioneer of that first class, hoped for the same results in the lives of young people that we hope for today. Merrill and Yates, the first teacher, helped their students to study, to learn the scriptures and to love the Lord. We hope that is what will happen in every seminary class today and forever.”