It is my pleasure to review three superior Christian films this week. From a Baptist policeman/fatherhood drama (Courageous), to a true tale of unfathomable forgiveness (Amish Grace), and a bittersweet recounting of Catholics peacefully coexisting with Muslims amidst civil war (Of Gods and Men), all are worth your time and contemplation. 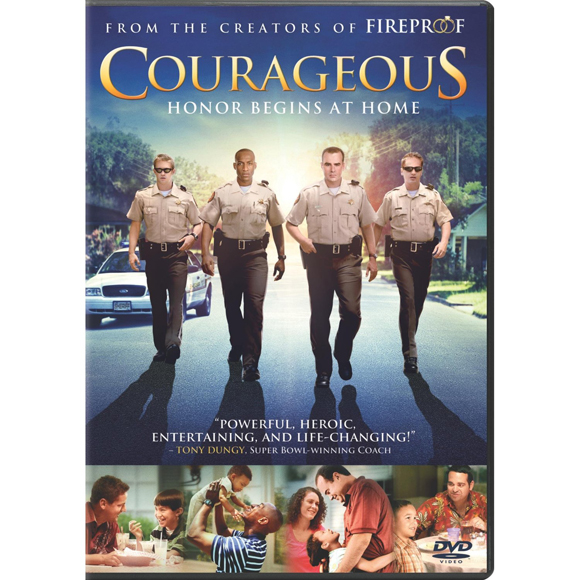 Courageous is the latest film from Sherwood Pictures, the Christian film studio responsible for uplifting faith-based fare such as Facing the Giants and Fireproof. It is in many ways the most accomplished film yet from the Baptist filmmakers out of Georgia, though it shares the same weaknesses as their previous efforts. As in those movies, moments of genuine dramatic power are diluted somewhat by distracting melodrama and broad humor. In the case of the latter, there’s some very funny stuff here, but it occasionally causes abrupt tonal shifts that undermine the emotional impact of preceding scenes, giving the sense that one is watching an entirely separate movie. In the case of the former, the decision to use church members and pastors instead of professional actors is a double-edged sword; they possess great sincerity and down-to-earth relatability but sometimes lack polish.

That said, there’s some terrific stuff here. Director/star Alex Kendrick shoots his action scenes with just the right mixture of hand-held camerawork and spatial awareness, nailing the balance of upping the adrenaline while never losing the audience (a skill that far too many Hollywood action directors haven’t yet mastered). Many dramatic moments hit their mark. What’s more, this is probably the most important film, spiritually speaking, of the past year. It addresses with refreshing clarity truths that are both timely and timeless. Kendrick uses the genre of the police thriller to thoroughly and poignantly explore the need for strong, loving, and faithful fathers, as well as devoted husbands. The virtues of integrity, altruism, love, and bravery are portrayed in a manner that makes them attainable and practical. As a call to action and as an invitation to come unto Christ, Courageous packs plenty of spiritual firepower against the forces of error that are dragging men, and their families, down into despair and sin. As a drama, I’d give it a solid “B.” As a spiritual allegory, rich in meaning and wisdom, it receives an “A.” Courageous is available on DVD Tuesday, January 17 2012.

CONTENT OVERVIEW: Courageous is rated PG-13, but it’s a very mild PG-13. The police engage in shootouts and fistfights with criminals, but the emphasis is on heroism, bravery, and protecting the innocent, not on glorifying violence. It feels more like a PG-rated film, with no foul language, gore, or sexuality. The rating comes simply from the presence of drugs in criminal possession, but in this regard, and all others, evil is portrayed only to contrast it with good. 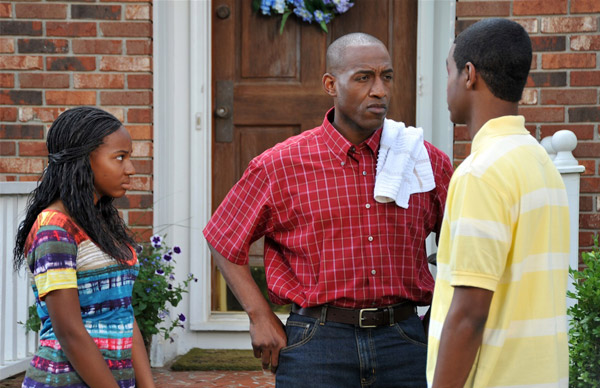 MESSAGES TO DISCUSS: “The powerful effect of righteous fathers in setting an example, disciplining and training, nurturing and loving is vital to the spiritual welfare of their children” (President Ezra Taft Benson, ‘To the Fathers in Israel.’) The Lord would have us serve Him by visiting and helping those who are sick, naked, hungry, or in prison (Matthew 25: 34-40). “By the way you love her mother, you will teach your daughter about tenderness, loyalty, respect, compassion, and devotion. She will learn from your example what to expect from young men and what qualities to seek in a future spouse. You can show your daughter…that she should never settle for less. Your example will teach your daughter to value womanhood. You are showing her that she is a daughter of our Heavenly Father, who loves her” (Elaine S. Dalton, ‘Love Her Mother’). Teach your children about Christ and lead them to rejoice in Him, so they may know how to have their sins washed away through His grace (2 Nephi 25: 23,26). “Fatherhood is leadership, the most important kind of leadership. It has always been so; it always will be so…The title ‘father’ is sacred and eternal. It is significant that of all the titles of respect and honor and admiration given to Deity, he has asked us to address him as Father” (Father, Consider Your Ways). 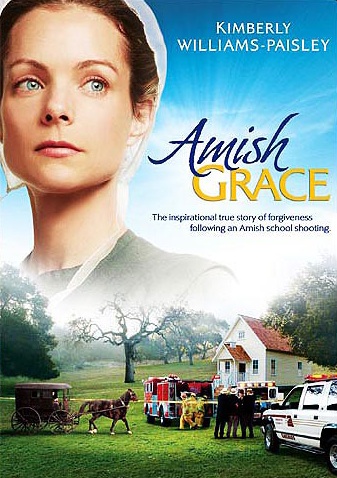 Despite its status as a Lifetime movie and criticisms that it takes artistic liberties with actual events, Amish Grace emerges as a poignant and inspiring little movie. It tells the story of the 2006 massacre of Amish schoolchildren by a mentally unstable gunman, that religious community’s subsequent forgiveness of the murderer, and their outreach to his widow. Due largely to acting and screenwriting that are far better than expected, the film transcends its made-for-TV cinematography, editing, and musical score. It’s true, some of the peripheral characters aren’t well-developed and come across as caricatures, but the lead performances by Kimberly Williams-Paisley (Father of the Bride), Matt Letscher (The Mask of Zorro), Tammy Blanchard (Bella), and Amy Sloan (The Day After Tomorrow) are all captivating, each giving wholly credible explorations of pain, loss, redemption, and healing. The screenplay intelligently makes a case for forgiveness, love, and faith without any trace of condescension or criticism. The paradox of the Amish shunning those who’ve left their faith while forgiving the greater sin of murder is brought up, but sadly left unexplored; still, this is a minor issue for a film this well-performed and moving.

Historical fiction has always created characters who are composites of actual people in order to streamline the narrative or to give the audience someone to relate to. Films like Titanic, Glory, and The Testaments have done this to memorable effect, but rarely has this been attempted with events that are so recent. One may question the choice to focus on a fictional couple rather than actual people whose stories are certainly inspiring. However, by having protagonists who struggle and doubt more than the almost superhuman real-life Amish seemed to, the filmmakers have given the audience someone to relate to, a choice that debatably has some merit in conveying to mainstream audiences the value of forgiveness. Amish Grace, therefore, should be taken as very good historical fiction, not as history itself, though it will hopefully motivate viewers to learn more about the actual events.Side note: I cannot recommend highly enough President James E.

Faust’s talk The Healing Power of Forgiveness, which addresses the real-life story on which this movie is based and the principles it teaches, for study and discussion in conjunction with viewing this film. Amish Grace is available on DVD. 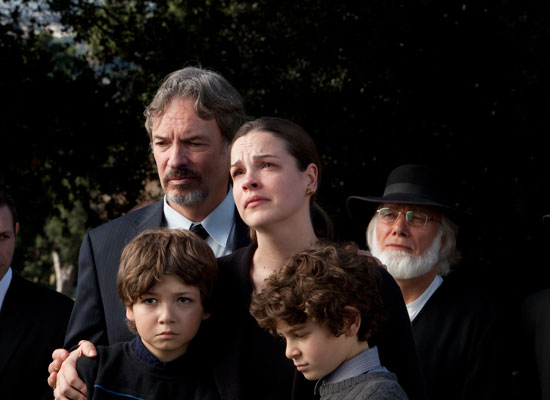 CONTENT OVERVIEW: Amish Grace was rated TV-PG. It tastefully addresses the true story of the massacre of Amish schoolchildren by a mentally unstable gunman. The shootings occur off-screen and though the characters see the bodies, the audience does not. Though it contains nothing offensive and is appropriate for families, the film is thematically intense as it deals with the emotional and spiritual aftermath of murder, so parents be aware and ready to discuss the story with mature children.

MESSAGES TO DISCUSS: The Lord asks us to forgive others so that our sins may be forgiven (Matthew 6: 14-15). Forgiveness doesn’t mean condoning wrong actions or letting someone escape consequences, it means letting go of bitterness and hate, allowing God to be the perfect judge (Doctrine and Covenants 64: 9-11). We are commanded to love our enemies (Matthew 5: 43-48).

OF GODS AND MEN REVIEW (Grade: A-) 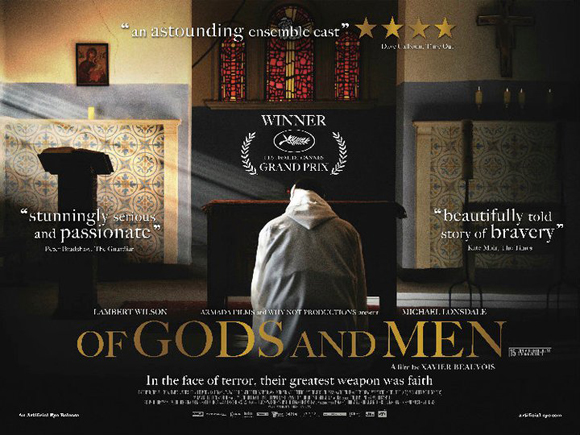 A stunning examination of the courage it takes to dedicate oneself to Christ and to the needs of others, Of Gods and Men is the film, of the three reviewed here, that feels least like a movie and most like real life. The naturalistic acting and filmmaking style make this 2011 movie play as if it were shot on location in 1996 when the actual events occurred. The stellar ensemble cast, led by Lambert Wilson (The Matrix Reloaded), disappear so completely into their roles that one forgets that these are not the actual people on whom the film is based. There is no musical score, save for the Gregorian chants by the central characters, a group of French monks living and serving in the war-torn Muslim nation of Algeria. Depending on the viewer this realism will be either the movie’s greatest strength or its greatest weakness. Some may complain that the film is too slow and too quiet. They may have their patience tested and argue that there are long stretches with nothing going on. For others, like myself, there is plenty going on in the subtle details of each interaction, prayer, and reflection. The film refreshingly takes its time to develop every character and allow them human weaknesses along with divine virtues. It explores the peace and nearness to God they seek in prayer, service, song, and solitude. This quiet integrity and its place in holding together a larger community is touching, all the more so when it is tested to the utmost by violence and terror.

The monks’ insistence on staying at their post in spite of probable death, as well as the mutual appreciation, love, and respect they share with the Muslims surrounding them is wonderful. Their dedication to helping everyone, regardless of which side of the erupting civil war they’re on, gets them into trouble with both factions, who both suspect the monks of siding with the enemy. The fact that living their beliefs places them in danger is clear, but those same beliefs are shown to drive their ability to overcome fear, find meaning for their lives, and coexist in harmony with neighbors of other faiths. If the film has a major flaw, it’s that it provides little context by way of circumstances and location. I learned the details of the time, the place, and the larger conflict through research after finishing the movie. That said, the acting is exquisite, the messages thought-provoking, and the realistic and ponderous film-making is at once gripping and soothing. Of Gods and Men is in French with English subtitles and is now available on DVD. 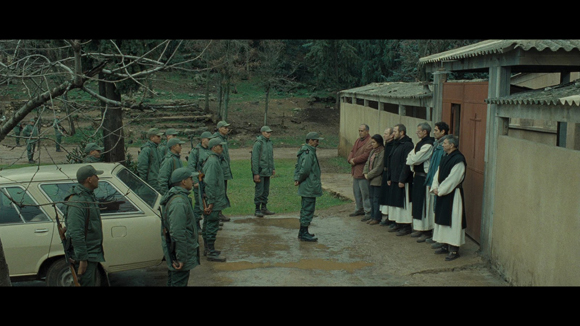 CONTENT OVERVIEW: Of Gods and Men is rated PG-13. It has a rather graphic scene of terrorists slitting the throats of civilians and one subtitled f-word.

MESSAGES TO DISCUSS: Perfect love casts out all fear (1 John 4:18). Draw near to God and He will draw near unto you; humble yourself before God, and he will lift you up (James 4: 8,10). Be ready at all times to give an explanation of the hope you have through Christ, the Prince of Peace (1 Peter 3: 15). Whoever puts their trust in God will be supported in their trials and afflictions (Alma 36:3). We can live in mutual appreciation and love with those who do not share our religion; in standing for right, be bold but not overbearing (Alma 38: 12,14). “I am going like a lamb to the slaughter, but I am calm as a summer’s morning. I have a conscience void of offense to God and to all men”