LDS Fiction: Just Shy of Paradise and an Angel Rescue 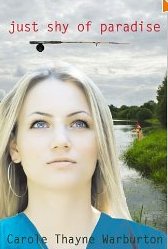 Carole Thayne Warburton’s new novel Just Shy of Paradise opens with the near drowning of four-year-old Lily Anderson in the Little Bear River near her grandmother’s house on her birthday. She is rescued by an angel. Twenty-four years later Lily is alone for her birthday and there’s nothing angelic about getting a speeding ticket, her car breaking down, having to borrow her grandmother’s car then running out of gas, and losing her journal in the river, followed by a rude trespasser fishing on her privately posted property. She really doesn’t care if fishermen fish in the river where it runs through the property she purchased from her grandmother’s estate, but her brother does.

The trespasser is Sky Brown, a Native American descendant of Chief Sagwitch whose tribe was almost completely massacred in 1863 by soldiers near the Little Bear River in what is now Cache County, Utah. He is recently divorced and was separated from his small son when his ex-wife took the two-year-old to New Mexico to live. His father died when Sky was only seven and he is deeply concerned about his son growing up without a father. Though raised by his Swedish American mother, his father’s brother steeped him in the traditions and resentments of his Native American ancestors, leaving him with confused feelings concerning his mixed heritage.

Sky and Lily reach a truce of sorts when he rescues her after she runs out of gas and she takes her broken car to him to be repaired at the garage he owns.

Lily suffers from extreme panic attacks and is undergoing therapy. She becomes good friends with another member of her therapy group, Rob, and has reason to hope friendship will turn to romance and marriage. One evening she and Rob are fishing on the river. Sky sees them together and when Rob wanders off with her grandfather’s fishing rod, Sky teaches her to fly fish with the aluminum pole belonging to Rob.

Lily needs money to finish school. It occurs to her that her grandfather’s fishing gear might have some value so she takes his fly rod to a shop where she is offered a hundred dollars for it before she even gets inside the store. The store manager offers her two hundred. He knows Sky and recognizes the rod is a valuable fishing rod handmade by Sky’s father. Sky immediately offers a much larger sum. From there, selling the rod becomes complicated when she discovers it’s a rare collector’s item and her brother does an online search and learns someone is willing to pay $6000.00 for it. Just when she decides it isn’t really hers to sell, the rod disappears and the police get involved.

This book has some mystery, a little history, and a delightful love story. It contains some interesting facts about a northern Utah Native American tribe and the travesty inflicted on them by an overzealous military officer, introduces a little understood medical condition, realistically describes beautiful Cache County, and details fishing lore. There is even a hint of mysticism. The story is well-plotted and moves at a comfortably fast pace after a slow start. The characters are interesting with the main characters moving slowly toward greater maturity and development. At several points Lily reads some journal entries written by an ancestor which I didn’t find added much to the story and the deliberate misspellings made them more funny than helpful. I read this book on my Kindle and was pleased with the minimal amount of copy errors. Readers who enjoy romance mixed with outdoor adventure will particularly enjoy this one.

Oddly enough real life has mimicked a scene in this book with the dramatic New Year’s rescue of three children submerged in a car in a river near Logan. It isn’t exactly the same, but close enough that I made the connection.

Carole and her husband live on land once part of the area where Chief Sagwitch and the Shoshone people lived. She is a graduate of Utah State University and loves to hike and ski. She is also an avid potter. This is her fourth published novel.