Opinion: Ten Predictions and Probabilities for 2012 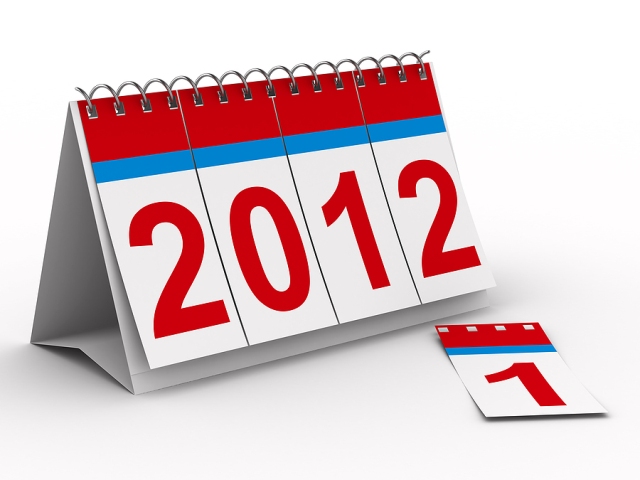 In descending order of probability, here is my stab at what will happen in the next 12 months.

Sorry, Mayans.  That a finite calendar necessarily ends on some date does not confer on the maker any special understanding of the future.

The motive:  Only the delusional will deny that Israel faces an existential threat from madmen feverishly driving scientists to build a nuclear bomb.

The urgency:  Most experts say that Iran is on track to have such a weapon within a year.

The opportunity:  As of this Saturday, the U.S. will no longer be responsible for Iraqi airspace, and the Iraqi air force is no match for overflying Israeli bombers.

Conclusion:  A pre-emptive strike is inevitable.  If the Israelis wait until the first blow is actually struck, they won’t have another cheek to turn even if they were so inclined.

#3:  If Republicans nominate Mitt Romney, he will be the next president.  If they nominate New Gingrich, Barack Obama will be re-elected.  [Probabilities: .55 and .85 respectively.]

If Gingrich wins the Republican nomination, it will be because he hasn’t yet imploded with zany comments.  (Zany is the perfect, upscale word to describe him; kudos to Mitt for using it.)  But implode he will in the general; it is an unavoidable part of who he is.

If Romney wins the nomination, which I believe he will, then he will beat Obama if he quits trying to win an argument with his invisible scorekeepers that RomneyCare was the right thing for Massachusetts, and concentrates solely on the economy and national security – especially the latter as Iran will try to close the Hormuz Straits in the coming war (why do you think they are currently holding naval exercises in the area?).

Those who believe the human mind is the highest power in the universe see government as the sole instrument by which the individual should and must be controlled.  Regulations are their scriptures and bureaucracy their priesthood.

Those who believe God is the highest power, on the other hand, look more to religious principles to govern man’s behavior.

The two have always been competitors, but are even more on a collision course as the debate about the role and scope of government intensifies, driven by economics as it is.  Because government activists occupy powerful positions today but are unsure of where they will be in 2013, and because religion alone stands athwart their path to the total permeation of government power into American society, 2012 will be a showdown year.  It is only logical that they will employ their present powers to shrink the influence of religion.

Expect the Constitution and its enshrining of freedom of religion as the most important of all freedoms to come under substantial attack.

#5:  The European Union will fragment and the euro will be pummeled.  [Probability: .60]

That 17 families live in a neighborhood is no reason to open a joint checking account.

The 17 nations of the euro zone did it anyway and thought that monetary unity would eventually lead to political unity.  Didn’t happen; won’t happen.  The nasty in-between step is how to achieve fiscal unity – control of spending – when one industrious neighbor (Germany) thinks other neighbors (Greece, Italy, et al) are spending too much on vacations and dining out.

Greece will default and Italy will not be able to sell its sovereign bonds for less than 7% interest, making it virtually impossible to work their way out from under their debt.  Drachma and lira will again be household words.  German workers will tire of what they perceive as the you-work-I-play philosophy of their southern neighbors and will rebel against Angela Merkel.  Demonstrations against austerity measures in Italy, Spain, and other countries will increase.  The flaws of the EU will become more pronounced because fiscal integration without political unity is impossible, and it goes against human nature for voters (remember them?) to give up national fiscal sovereignty to unelected officials in Brussels.  There goes the neighborhood.

The dream of a unified European community equal in economic power to the United States is gone.

#6:  The oft-noted unsustainable practices in our economy will finally become unsustainable.  [Probability: .50]

More Americans are realizing that something has to give when a country’s government borrows 43 cents of every dollar it spends, especially when it is spending more on consumption and less on job-producing investments.  Our politicians are quick to tell us that this pattern of borrowing and spending is unsustainable, but then, in a game of chicken, continue to act as if it were sustainable.

The problem is not so much the debt ceiling, an artificial number that makes us feel something is being done about the problem, but the debt wall – the finite liquid capital available in reality to fund sovereign debt.  The world is running out of money to borrow and will soon hit the wall.  (Very good insights on this from Marc Nuttle at debtwall.org.)

[N]o one borrows money for the sake of the money itself; money is only the medium by which to obtain possession of productions.  Now, it is impossible in any country to transmit from one person to another more productions than that country contains.

That is, impossible without cheapening the value of the money.  Because we have not learned this lesson, the dollar will continue to lose value, inflation will increase (moderate in the coming year; severe in 2013 and 2014 no matter who is president), and more Americans will scramble for tangible assets.

There’s a reason Church leaders have counseled us to get out of debt and put away a supply of food, i.e., possession of productions.

China’s own economic problems make that society not as stable as its rulers want the world to believe.  Also, the 57-43 imbalance of males to females creates tremendous societal pressures, and in the eyes of its rulers makes a lot of males, frankly, expendable.  Leaders under pressure often point to external threats as a control tactic.  Add to this the sizeable and expendable male population (something about “decrease the surplus population” rings in my ears this season), and one has a formula for war.

Where will the test come?  Probably over the Spratly Islands and maritime territorial disputes with Vietnam, but it could be the biggie – Taiwan.

And what will America do?  Nothing very assertive.  After all, if a bank I owe money to wants to take my neighbor’s car, will I ask that bank to lend me more money so I can defend my neighbor?

Terrorists desperately need a visible strike against American interests so they can recruit more 80-IQ types to sacrifice their miserable lives in further attacks against the Great Satan.  We have disrupted that spiral and our enemies know they must rebuild and feed it.

Coastal cities are the easiest targets, but the best effect for terrorist propaganda would be an attack in America’s heartland.

#9:  Missionary work in the United States will be turned over to the stakes and all American missionaries will be sent to foreign countries.

I do not speak from any inside information, but rather note trend lines from demographics and human behavior.

A few months ago I wrote a Meridian column titled “Behold a Passive Army” in which I calculated that there are 804,000 living returned missionaries, most of whom live in America and most of whom don’t do missionary work.  Bluntly speaking, they don’t want to be part of a sales system.  They did it for two years in strange cities, but are not willing to apply such tactics (or see them applied) in their own hometowns among their own friends.

If the work is to be hastened, sales gimmicks must give way to comfortable conversations and gentle mentoring – and no pressure to “find someone for the missionaries to teach.”  The solution: send all full-time missionaries abroad and leave it to stake presidents in the U.S. to develop outreach and mentoring ideas commensurate with local customs that work with rather than against human behavior, especially among the leaders, managers, and entrepreneurs we so sorely need to build the kingdom.

Most returned missionaries will never do missionary work that makes them feel like salesmen or birddogs.  But a simple promise will get many of them off the sidelines:  “If you find them, you may teach them.”

This is a 20% probability for now because coming out of obscurity is a process more than an event, and the fulfillment of this prophecy may stretch over several years.  The key is to watch how polarized people become toward us – how few remain in the mushy middle – in the months ahead.  Polarization and obscurity vary inversely.

The Romney presidential candidacy is smoking out two types of anti-Mormons: a smaller group who actually fear Salt Lake will dictate political policy, and a larger group (driven by ministers protecting their paychecks) who fear that the Church will come to be held in higher esteem and will grow.

Both groups will spread whatever rumors, criticisms, misconceptions, and flat-out lies float through their brains.  As they do, curiosity about us will increase.  As curiosity increases, so does polarization, which leads to higher visibility and thus less obscurity.

The Prophet Joseph was promised that his name would be had for good and evil throughout the world – that is, he would become a polarizing entity.  Same thing has to hold for the Church.  Counter-intuitive as it may be, antagonism helps us.

It’s not called a marvelous work and a wonder for nothing.

Gary Lawrence’s book “Mormons Believe … What?!  Fact and Fiction About a Rising Religion” answers 24 misconceptions about the Church, and is a helpful gift for the curious and the less active.  Visit MormonsBelieveWhat.com