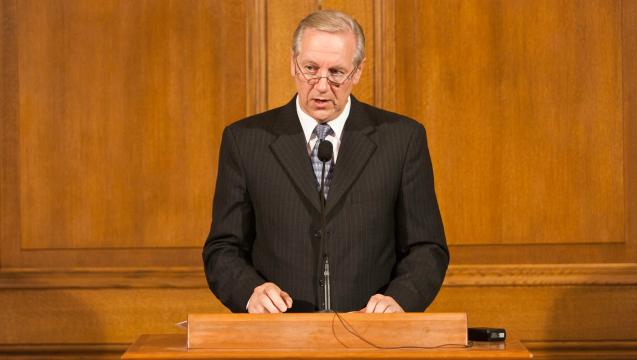 Church Public Affairs Director, Michael Otterson wrote about the practical charity of the Latter-day Saints after a recent windstorm for the On Faith blog of the Washington Post. Here is an excerpt with a link to read the entire article.

Most of the residents in Davis County, Utah, became aware in the early hours of the morning of December 1 that something was wrong. It was the wind that woke most of us – howling over the peaks of the Rocky Mountains and barreling through the canyons as if channeled and focused on our homes by some giant wind tunnel.

Salt Lake City isn’t Kansas, and Davis County isn’t Tornado Alley, so we aren’t used to winds over 100 mph. Snow we can handle, but we’re not too used to freak winds. Even as dawn came, we were hesitant to venture outside to survey the damage because the gale was still blowing hard. But during the course of the morning we saw what the worst windstorm in 25 years had done. Semi-trailers overturned on the I-15 freeway. Power lines down. Countless homes with roofs laid bare to the sub-structure. Roof shingles everywhere, along with broken branches, wrecked fences, demolished mailboxes, overturned trash cans and lots and lots of debris. In my own yard, two 25-foot favorite blue spruce trees were toppled, and along my street the scene looked more like an earthquake, with huge trees uprooted and lying at impossible angles. Two county golf courses alone reportedly lost 800 trees between them.

Over the next two days, people cleaned up as best they could, and we received word that if we piled tree branches by the side of the road, the city would collect them. We dutifully did the best we could so the snowplows could operate freely when the first heavy snow arrived.

Then on Sunday morning, something happened that I will never forget.

Davis County is a predominantly Mormon community, and one of the most efficient channels of communication is through the local “wards” or Mormon congregations. At 8.50 a.m. on Sunday I received a phone call from the local bishop— the congregational leader. He had just received word that all church meetings would be canceled for the day, and that we were invited to meet in our neighborhood emergency groups – out in the street – at 10 a.m., by which time we would have received emails with more detailed instructions on what to do.