A Thanksgiving for Religious Freedom 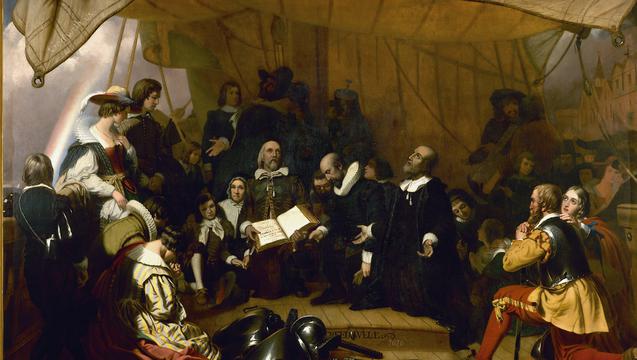 They sought to breathe a freer air,
To worship God unchain’d —
They welcomed pain and danger here,
When rights like these were gain’d.
—Author Unknown

As the United States celebrated Thanksgiving, citizens across the nation gather with family and friends to commemorate the shared gratitude between the English pilgrims and the local Native Americans. During this season, many recount the history of these English pilgrims.

Persecuted, arrested and fined for their form of Christianity, these so-called separatists fled their beloved mother country to find what the governor of Plymouth, William Bradford, called “freedom of religion for all men.” After a ten-year sojourn in Holland, the separatists prayerfully decided to depart for America.

Some members of their congregation, including the group’s long-time preacher, John Robinson, stayed behind in Holland. Edward Winslow, a fellow worshipper, recorded Robinson’s tender farewell address: “[Robinson] charged us before God and his blessed Angels … [that] if God should reveal anything to us by any other instrument of his, to be as ready to receive it, as ever we were to receive any truth by his Ministry: For he was very confident the Lord had more truth and light yet to break forth out of his holy Word.”

According to the account, Robinson also commented on the reformed churches of the day, stating that “though [Calvin and Luther] were precious shining lights in their times, yet God had not revealed his whole will to them: And were they now living … they would be as ready and willing to embrace further light, as that they had received.”

For members of The Church of Jesus Christ of Latter-day Saints (Mormons), Robinson’s premonition that “the Lord had more truth and light yet to break forth” proved prophetic. Latter-day Saints believe that the pilgrims, among many others, helped create the environment of religious freedom in the United States that paved the way for a restoration of Christ’s ancient church.

Speaking to the body of the Church in 2005, Elder Robert D. Hales of the Quorum of the Twelve Apostles recounted that as “religious persecution in England continued … many were prompted to seek freedom in new lands. Among them were the Pilgrims, who landed in the Americas in 1620.”

“Other colonists soon followed,” he continued, “including those like Roger Williams, founder and later governor of Rhode Island. … Williams said that there was no regularly constituted church of Christ on earth, nor any person authorized to administer any church ordinance, nor could there be until new apostles were sent by the great Head of the church, for whose coming he was seeking.”

In the 18th century, the founders of the United States established religious freedom for all citizens through the Bill of Rights. This newly secured liberty allowed for the lawful establishment of The Church of Jesus Christ of Latter-day Saints.

In 2009, Elder Dallin H. Oaks stated, “‘For the rights and protection of all flesh’ the United States Constitution includes in its First Amendment the guarantees of free exercise of religion and free speech and press.”

“Without these great fundamentals of the Constitution,” he continued, “America could not have served as the host nation for the restoration of the gospel, which began just three decades after the Bill of Rights was ratified.”

Though The Church of Jesus Christ of Latter-day Saints began in 1830 with only six members, today it is a global religion with more than half of its 14 million members living outside the United States.

As a result of the Church’s global membership, the Thanksgiving holiday is not celebrated by most of its members. Yet the pilgrims’ historical role in fostering religious freedom and their example of gratitude resonate with people around the world, especially Latter-day Saints.

More recently, Latter-day Saint Apostles have frequently emphasized the importance of religious liberty (see a list of discourses here), and the current president of the Church, Thomas S. Monson, has highlighted the Thanksgiving holiday’s theme of gratitude.

“A grateful heart … comes through expressing gratitude to our Heavenly Father for His blessings and to those around us for all that they bring into our lives,” said President Monson in a 2010 address. “This requires conscious effort—at least until we have truly learned and cultivated an attitude of gratitude. … When we encounter challenges and problems in our lives, it is often difficult for us to focus on our blessings. However, if we reach deep enough and look hard enough, we will be able to feel and recognize just how much we have been given.”

In the United States of America and many other nations around the world, people are grateful to God for their blessings during this time of year; among these blessings is that of religious freedom.