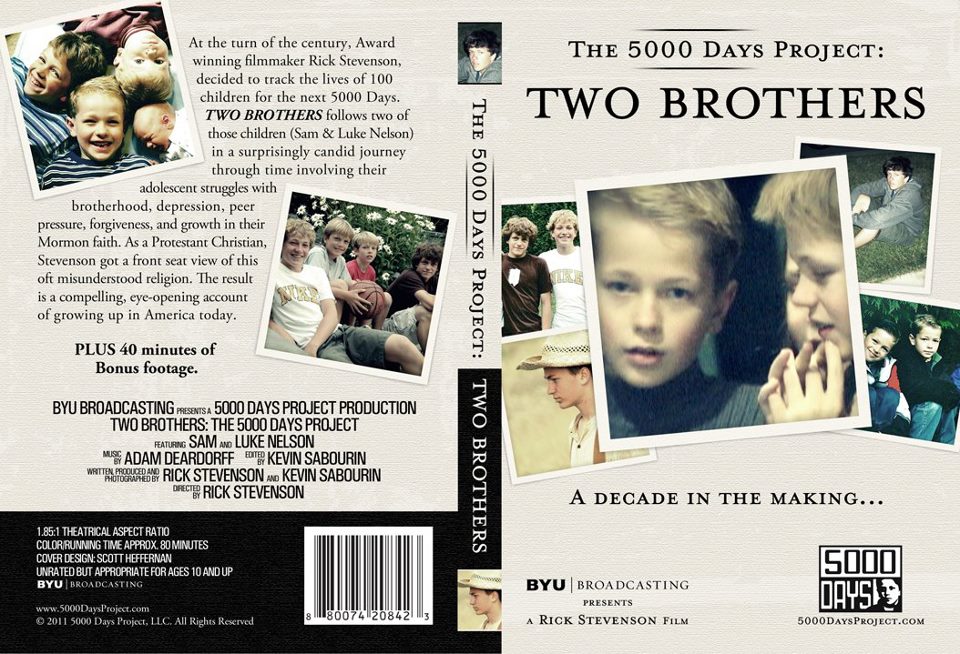 In a time when a Baptist pastor has stirred up the nation by labeling The Church of Jesus Christ of Latter-Day Saints “a cult,” leave it to another Protestant to deliver the most compelling argument for the Christianity of Mormons and their faith. With Two Brothers, documentary filmmaker Rick Stevenson launches the decade-in-the-making 5000 Days Project, an interfaith effort to capture the struggles, hopes, fears, and achievements of two hundred children in six countries over the years.

This is the first film in a planned series, and Stevenson will be forgiven that it features two boys who eventually became his nephews, as these young men make for gripping subjects. The film follows Sam and Luke Nelson, Seattle siblings and Latter-Day Saints whose real-life story includes such relatable trials as loneliness, self-doubt, and family tension as well as cinema-ready adversities such as fighting depression, reaching for the dream of playing college football, and coping with catastrophic natural disaster.

Through it all, the boys’ personalities make for an imminently watchable documentary as they go through high school and enter into missionary service. Stevenson even got special permission to film in the Missionary Training Center and for a missionary to record regular video diaries. The boys’ weaknesses make them relatable while their strengths make them inspiring. They’re funny and playful yet capable of great compassion, heartache, and insight. Most of all, they’re guided and sustained by faith in Christ and love of family, both of which are tried throughout the course of the film and emerge stronger because of it.

Stevenson the uncle may have been tempted to use this movie as a platform for showcasing his charming nephews. Thankfully, Stevenson the filmmaker knows that a good documentary needs to be fast-paced and purposeful, and he trims what was likely hundreds of hours of footage down to a lean 80 minutes. Consequently, the film never bores nor lags. The editing is skillful, identifying key themes and narrative threads, then following them through the years. As his subjects mature over time, so does Stevenson as a filmmaker; early footage looks raw and amateur, but the cinematography gains some luster as it goes on. The director provides some personal reflection and voiceover narrative, serving as bookends to the film, which seem self-indulgent and out-of-place if one views Two Brothers as a standalone film, but will effectively link the 5000 Days films together if continued.

Most importantly, the film is an ode to the healing and sustaining power of the Savior, His teachings, and His sacrifice. The two brothers are merely the vessel of demonstrating that message. As a non-Mormon Christian, Stevenson has no interest in converting people to the Church. What he clearly does possess is a love for Jesus Christ and a desire to convey the beauty he sees in Latter-Day Saint beliefs and culture. Two Brothers represents a wonderful opportunity to improve interfaith relationships, if we can better appreciate (and learn from) the strengths, virtues, and beliefs of those outside of our faith, as Stevenson has so wonderfully done with ours. GRADE: A-

Two Brothers is available for purchase, download, or rental here, or can be viewed for free online, presumably for a limited time, at BYUTV. BYUtv will be airing Two Brothers this Sunday, October 30 at 7 pm MT, right after the final episode of Fires of Faith.

For movie reviews, articles, and fun videos by this author, visit www.mormonmovieguy.com