The Perpetual Education Fund – A Decade of Changing Lives

SALT LAKE CITY, Utah — After serving a mission for The Church of Jesus Christ of Latter-day Saints, Moroni Pineda had big dreams for the rest of his life. The economy in his native Mexico made achieving those dreams difficult, but fortunately Pineda had help.

“We decided to apply for a Perpetual Education Fund loan, and it became the lever that allowed me to push upward, even though there were times when the dream of a degree seemed impossible,” Pineda said.

Moroni Pineda is just one of 50,000 Mormons around the world whose lives have been pushed upward by the Perpetual Education Fund, which celebrates its 10th anniversary this year. 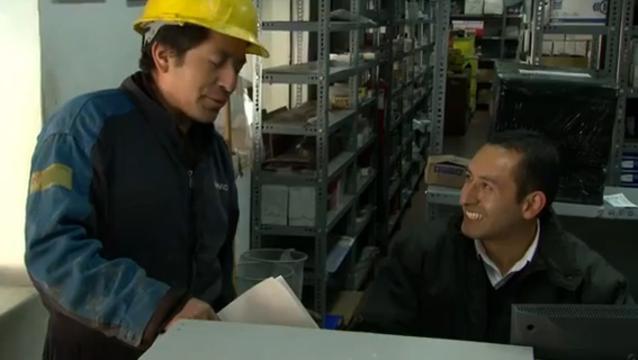 Mormons around the world have been helped by the Perpetual Education Fund. © 2011 Intellectual Reserve, Inc. All rights reserved.

The Perpetual Education Fund (PEF) was established in 2001 when Gordon B. Hinckley, then President of The Church of Jesus Christ of Latter-day Saints, announced a “bold initiative” to help faithful young members of the Church in developing nations who were trapped in a cycle of poverty.

President Hinckley said, “In an effort to remedy this situation, we propose a plan — a plan which we believe is inspired by the Lord. The Church is establishing a fund largely from the contributions of faithful Latter-day Saints who have and will contribute for this purpose. … We shall call it the Perpetual Education Fund. … From the earnings of this fund, loans will be made to ambitious young men and women, for the most part returned missionaries, so that they may borrow money to attend school. Then when they qualify for employment, it is anticipated that they will return that which they have borrowed together with a small amount of interest designed as an incentive to repay the loan.”

The PEF program is patterned after the Perpetual Emigration Fund, which helped more than 30,000 early Church members journey to the Salt Lake Valley from Europe in the mid- to late 1800s.

The program is funded through contributions of Church members and others who support its mission. It is a revolving resource in which money is loaned to members of the Church between the ages of 18 and 30 to help pay for training or advanced education that will lead to a viable, local job. Students then pay back the loan to the fund at a low interest rate.

“Long ago, Moses stretched his staff over the Red Sea and the waters divided. President Hinckley mirrored this same faith when he figuratively held his prophetic mantle over the dark sea of poverty and initiated PEF,” said Rex Allen, PEF’s volunteer director of training and communications, who has been involved in the program from the beginning.

PEF executive director Elder John K. Carmack recalls that President Hinckley asked him to head up the newly announced program without providing any specifics how it would work.

“I felt very inadequate and overwhelmed, but was excited too because I knew that it was something meaningful,” Elder Carmack said. “So we went to work.”

Elder Carmack was able to find top-notch volunteers like Allen to join the PEF team, and by August 2001, the first applications began arriving.

“At first we wondered if anyone would apply,” Elder Carmack said. “But by December we had 300 applications.”

The program first rolled out to Chile, Mexico, and Peru, but has since spread to more than 50 countries around the world. PEF primarily operates through existing Church infrastructure: institutes of religion, Employment Services, and ecclesiastical leaders. The program has only 26 full-time employees and is primarily administered by volunteers. Any administrative costs are provided from general Church funds so that every dollar donated to the fund is used to provide loans.

The average program supported by PEF loans costs approximately $1,900, and participants are expected to begin paying the money back immediately.

“We decided to charge a small repayment amount while they were in school so they got in the habit of making payments, something in the nature of five dollars a month,” Elder Carmack explained. “Six months after graduation, the payment goes up to the amount needed to pay back the loan over eight years. We never want the payment to be more than five or ten percent of the expected income.”

Participants like Christian René del Pino Vergara of Chile say paying back the loan is a blessing.

“Currently, I am working as a human resourceanalyst. I truly have unlimited opportunities with my employer,” Vergara said. “Each month my wife and I feel joy in the ability to pay the monthly payments of our loan. We have always made an effort to be current on our loan and will remain current until we have paid the complete amount to this sacred fund.”

Elder Carmack says the majority of PEF recipients will repay their loans.

“We are not in the business of giving money away. That is very easy to do, but that weakens people,” he said. “President Hinckley would always say that when people repay their loans, they will have a sense of freedom.”

The average length of schooling is 2.4 years, and PEF participants have an average graduation rate of nearly 70 percent, compared to a 35 to 55 percent rate for most colleges in the United States. In developing countries where a large percentage of citizens are unemployed, close to 90 percent of PEF graduates already have gainful employment. Allen says although such statistics are wonderful, they are not the ultimate goal of the program.

“PEF is not about the money,” Allen said. “It’s about integrity and self-reliance. PEF is not primarily a ‘loan program’ and it’s not just about ‘getting an education’ per se. It’s the result of the training that we’re after. It’s really all about helping people get jobs so that they can come out of poverty and serve. It’s a leadership program where loans are made to help people become more effective leaders in their homes, communities, and in the Church.”

Indeed, PEF graduates report having more time with their families and more time to serve in the Church and community. Moroni Pineda, for example, is currently the president of the Puebla Mexico Valesquillo Stake.

“We have been at this for 10 years now, and many of the stake presidents, bishops, Relief Society presidents and other leaders serving in these areas are graduates of the program,” Elder Carmack said. “They have greater skill and more independence because they have qualified for better jobs. This trend will only increase in the future.”

Participants agree that many of the blessings of the program are hard to quantify.

“PEF not only helped me financially, but also spiritually,” Sabachtani Balasabas of the Philippines said. “I learned to be more self-reliant and to work even harder.”

PEF recipient Julius Omollo of Kenya said the program is “rekindling light that was once dead in us.”

The students are not the only ones who benefit from the Perpetual Education Fund. Those who help support the students say they are also blessed. These volunteers work out of 43 PEF service centers around the world and check in with each PEF participant once a month.

76-year-old Maria Angelica Sambucetti, who volunteers at the PEF service center in Argentina, said that connecting with the young students helped her overcome depression after her husband died.

“I feel wonderful with the young people; I feel very close to them. They talk to me about their projects, their small businesses they plan to undertake,” Sambucetti said. “I care about these young people. I remember them by name and I try to strengthen them, to encourage them, to help them have hopes.”

In addition to the paid staff and volunteers, there are also, on average, about 70 missionary couples at any given time who help administer the worldwide PEF program.

At the end of the day, however, the PEF program would not function without the generous financial support of people around the world. Allen said the level of donations has stayed steady over the last decade, even during the recent economic downturn. Most donations come in small amounts from individual members, with a small percentage coming from wealthy benefactors.

“We are certainly grateful for larger donations from people who see this as wonderful way to help the world, but hundreds of thousands of members also make small donations that make a huge difference,” Allen said.

Elder Carmack and Rex Allen agree that it has been amazing to watch the growth of PEF over the last 10 years, and they say the program will only continue to grow.

“Today’s world is competitive, more than it’s ever been. I believe men and women need to get a type of education which will enable them to meet the exigencies [urgent needs] of life. … Men and women need to be prepared for a vastly broader scope than we’ve ever had before. … [The Perpetual Education Fund] is a fund that will go far into the future” (Thomas S. Monson, in news conference, February 4, 2008; see Church News,Feb. 9, 2008).