LDS Fiction: Count Down to Love 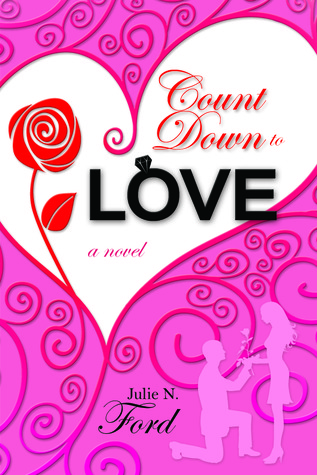 Being left at the altar is bad enough, but to add insult to injury the bride is left with all of the bills for the wedding to pay, kicked out of her apartment, and her bank account wiped out.  So begins Count Down to Love by Julie N. Ford.

Kelly Grace Pickens has nowhere to go and no money following the disastrous marriage that didn’t happen.  She doesn’t even know if she’s been jilted or if something terrible has happened to her fiancé and manager, Trevor.  Her cousin arrives and helps her work out a temporary fix.  The cousin is working as one of the producers of a bachelor reality show.  Arrangements are made for Kelly to fill in on the first show for a young woman who made a last minute cancellation.

Kelly’s career as a country singer has been derailed, which she doesn’t care too much about though she knows it’s a disappointment to Trevor.  She loves to sing, but what she really wants is to be a pediatric nurse.  She has the degree, but between Trevor and her mother, she set aside her ambition to please them.  With huge bills to pay, she agrees to go on the reality show, which her cousin assures will be for just one episode.  The only problem is the bachelor keeps choosing her to stay and she keeps accepting. Even worse, she fears she’s falling in love with the bachelor, Dillon, when she still considers herself engaged to Trevor. There’s something almost magical between them, but it seems all of the other contestants feel something special between them and Dillon too.  Discovering the lengths some of the women will go to get the inside track with Dillon and the backstabbing behind the scenes most of them indulge in, leaves Kelly lost and confused.

Kelly has a lot of growing up to do and travels a hard road in discovering who she really is, what her values are, and what she wants out of life.  She’s been hurt and doesn’t give her trust easily.  Between her social climbing mother and her lost-in-a-fog preacher father, she hasn’t had much opportunity to develop her own inner confidence or self-awareness.

Count Down to Love is plotted well and maintains a high level of excitement throughout.  The first chapter could have been omitted or greatly abbreviated since the wedding planners are more pretentious than necessary to the story.  By the second chapter the story gets going, is fun, and the reader develops strong feelings toward poor Kelly.  Kelly is a great character and her development from a meek “do-as-she’s-told” girl to a woman with a mind of her own is especially well done.  I was particularly pleased that the author didn’t rush a happy ever after ending, but let Kelly follow her own self-discovery time table.  There is one brilliant moment of honest discovery experienced by Kelly’s mother that is particularly well done as she recognizes her own misplaced values, then brushes off this insight, revealing the continued shallowness of her character.  I would have liked to see a stronger character development of Dillon.  He’s likable. but his strengths don’t come through as well as Kelly’s.

There’s something phony and shallow about a television show dedicated to a bevy of women vying for one eligible bachelor and Ford did an excellent job of depicting this side of such a premise.  She gives more attention to immodest clothing, making out, and implied sexual conduct than is usual in an LDS novel and readers may find this off-putting. Overall, this novel is light, entertaining, and carries an important message concerning self-worth and self-determination. Don’t be misled by the silly, too-pink cover which seems to imply the novel is merely amusing, feminine fluff.  It’s a lot more than that.

Julie graduated from San Diego State University with a degree in Political Science and a minor in English Literature.  She also has a Masters in Social Work from the University of Alabama.  She is the author of three novels.  She, her husband, and two daughters live in Nashville, Tennessee.