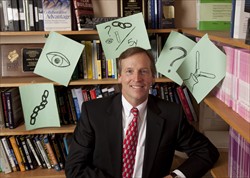 Where does Forbes turn when looking for a methodology to rank the world’s most innovative companies? To Brigham Young University’s Jeff Dyer and the insights found in his book released this week by the Harvard Business Review Press.

The Innovator’s DNA, coauthored with INSEAD’s Hal Gregersen and Harvard’s Clayton Christensen, is the product of 8 years of research, interviews with the world’s top business innovators, and surveys of hundreds of business innovators and thousands of executives.

The researchers collaborated with Credit Suisse to produce a ranking of the world’s 50 most innovative companies that Forbes highlighted as the cover story of their July 22ndissue.  Unlike other “most innovative” rankings that are based on popular votes,  the Innovator’s DNA ranking is based on the premium that investors pay for a company’s stock because they expect the company to launch future new products and services that will generate even bigger future income streams.

In both the Forbes article and their book, Dyer and his coauthors authors answer the question, “Can innovation skills be learned?” with a resounding yes, and prescribe specific steps to develop the crucial ability. They also identify changes that must be made on a company-wide level to foster innovative thinking and actions.

Prior to returning to BYU, where he earned his bachelor’s degree and MBA, Dyer was on the faculty of the Wharton School of Business.  Dyer is the only strategy scholar in the world to have published five times in both Harvard Business Review and Strategic Management Journal and he was the fourth most-cited management scholar over the period from 1996-2006.

In the course of his research, he and his coauthors found that the most innovative CEOs spend 50 percent more time practicing five specific innovation skills than do their less creative counterparts.

Here are the five “discovery skills” that emerged, along with specific actions you can take to implement them:

“It became clear early on that these folks asked a lot more questions than your typical executive,” Dyer said.   “Especially questions that challenge the status quo.”

“But if you just sit in your room and question all day, you are not going to start an innovative business,” says Dyer, who chairs the Marriott School of Management’s Department of Organizational Leadership and Strategy. “There’s an action-oriented attitude that is captured in observing and these other skills.”

“Rather than network to gain access to resources or to market yourself, connect with others who have very different backgrounds to simply to find and test new ideas.  This will widen your perspective,” Dyer says.

Living in a different country and culture is an excellent opportunity to experiment, says coauthor Gregersen. “You can’t succeed in living overseas without using these discovery skills,” he says.”The constant practice of those skills–required by the novel cultural environment–not only helps people in their present challenges, but also prepares them for equally interesting (but qualitatively different) challenges later.”

The researchers noted that the senior executives of the most innovative companies in their study don’t delegate creative work. So how do they make time for these innovation skills?

They enlist others’ help in planning and analysis, the skills that are important for executing rather than innovation, Dyer said.

“Contrary to conventional wisdom, innovation isn’t a genetic endowment magically given to some and not others; it’s a set of skills that can be developed with practice,” Dyer says. “If you want to be one of the really successful people that make a mark in business, you want to be the person that comes up with the idea, not just the person who carries out others’ ideas.”