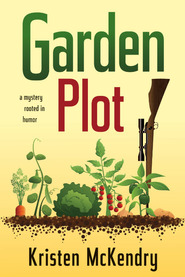 It’s not that she’s unsympathetic, but finding a body, a dead body, who appears to be one of her guests, sprawled in her garden among her beans isn’t the way Erin Kilpatrick wanted to start her day.  Erin has enough trouble running a rehab center for recovering alcoholics and drug abusers, taking care of her thirteen year-old daughter, struggling to pay the bills for her business situated in a turn of the last century convent, and battling a Romeo contractor who is supposed to be renovating the cottage she and her daughter call home.  A killer running loose and a missing “guest” are all she needs to add up to one gigantic headache.

Garden Plot written by Kristen McKendry starts with a murder and grows more complicated as Erin struggles to deal with her volatile clients and a detective that both challenges her and makes her heart flutter. She is concerned that the murder will upset her guests’/clients’ fragile healing process yet understands they must be questioned by the police since any of them may hold unknown clues or even be guilty of the heinous crime.  Not content to let Detective Harris do all of the sleuthing, Erin is quick to point out her own theories and just as quick to do a little investigating on her own.

There are plenty of suspects including some of her other clients, the dead man’s wife, who doesn’t seem to know her husband had a drinking problem and had gone to a detox treatment center, a secretary who appears to be better informed than the wife yet equally uninformed about the boss’s drinking problem, the dead man’s partners, a long time foe of the dead man’s environmental group, and a few others.  Matters are further complicated when it is discovered the dead man isn’t who everyone thought he was.

Erin is a widow who was deeply hurt to learn her husband was having an affair with the woman injured in the car crash that took his life.  She cares about her patients/clients who stay at her center during their transition from the detox center to resuming their interrupted lives; she even cares about a tatooed, blue-haired young man with multiple piercings who shows a little too much attention to her daughter.  She isn’t sure she’ll ever remarry, but feels a growing interest in the doctor who runs the detox center and sends his patients to her.  Then there’s the detective who stirs feelings long dormant, challenges something competitive inside her, and is the last person she wants to see her looking foolish.

While police and news reporters crawl around her property and ambush her at the mailbox, she struggles to keep the program going.  Her annoying visiting teacher shows up, leaving her feeling she is being accused of something. When the visiting teacher who is also her closest neighbor suffers a heart attack, Erin volunteers to care for her dog Dribbles, who lives up to his name and becomes her daughter’s best friend.

Garden Plot is a fun mixture of serious mystery and humor. The characters are enjoyable and McKendry paints them in a way that makes them feel real, sometimes a little too much like people the reader knows in real life.  For a story that appears light and easy, the mystery is surprisingly complicated and not easily solved.  The romance elements are so low key, they’re as easy to miss as the murder solution.  The book is enjoyable and will appeal to any woman who feels torn in a dozen directions as she tries to juggle just one more thing on top of family, career, and church responsibilities.

Kristen Garner McKendry was born and raised in Utah and received a bachelor’s degree from Brigham Young University.  She is interested in urban agriculture, sustainable living, and environmental issues.  She has some unusual interests which include playing the bagpipes, learning dead languages, growing wheat in her back yard, and making cheese.  She and her family reside in Canada.