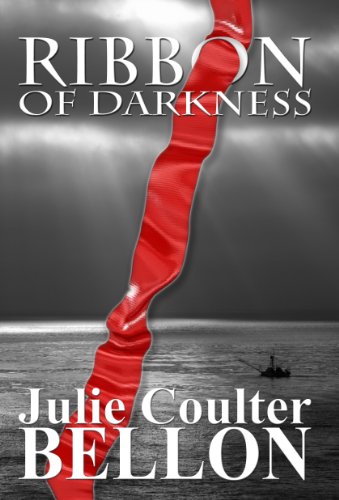 Julie Coulter Bellon is known in LDS readers’ circles for her internationally based suspense novels.  I read her most recent novel, Ribbon of Darkness on my Kindle Reader. Reviewing an electronically formatted book is a little more difficult than a paper copy where I can find sections and check details more easily, but just as more readers are adjusting to the new electronic readers and they are growing in popularity, I as a reviewer, find it increasingly important to learn new bookmarking and note-taking techniques. An e-reader simplifies carrying around something to read while traveling and has many features such as picking your own desired type size which appeals to many readers.  The significantly cheaper cost of e-books is a strong plus for LDS readers in far flung places with little or no access to libraries or bookstores that carry LDS books or who must tack on steep postal charges to their books ordered online.

Kennedy Campbell found a need to put some distance between herself and her parents following the death of her sister.  She’s an international journalist and finds a measure of peace in working on a story that exposes the hardships and injustices found in an Afghan refugee camp.  When the camp is attacked by Taliban soldiers, she escapes with a young woman and her little boy along with the woman’s brother.  Arrangements are made to go to Australia, but their boat sinks and they are captured by terrorists with a link to al Qaeda.

Ethan Barak wants revenge for the murder of his father by a former associate.  Once involved in the Indonesian black market, Ethan changed his life and turned his skill and knowledge toward assisting MI-6.  The attack leaves him angry with his secret service contact, too, for failing to protect his family  and he pulls away from him to go after the killer himself. In a bar  in Indonesia he discovers a young woman who is being held prisoner by the group he wishes to infiltrate in order to have access to the man he wants to destroy. He can do nothing to help her and assumes she will be killed.  Instead he discovers her again on a hi-jacked ship and learns she is being held for ransom and that her mother is a powerful American Secretary of the Navy.  His cover is blown and he also becomes a prisoner.  Both suffer from beatings and attacks that weaken them and tempt them to give up. The two join forces in an attempt to escape the ship and alert the world to a dangerous plot that threatens lives around the world.

Along with the edge-of-your-seat thriller plot in Ribbon of Darkness, there is a low key romance, and issues built around moral choices, such as choosing between the death of a stranger or the loss of cover, protecting a family member or a friend, revenge, courage in the face of almost certain death, and forgiveness.

Bellon is a rapid fire plot strategist who keeps the reader jumping from crisis to crisis.  She brings the background elements; rivers, bar, bathroom, refugee camp, thirst, blood, etc. into her scenes rather than setting them up as background.  If a character is thirsty, the reader may very well suffer a similar need to find a drink.  She’s more minimalist concerning her characters, only providing enough background or character sketch to carry the story.  Character growth in her main characters is satisfying however.

Ribbon of Darkness is edited well, but is in great need of copy editing; the typos are excessive and irritating. I was confused too by the designation of the British Secret Intelligence Service department being referred to as MI-6 instead of MI6 as I thought the hyphen designated a particular military helicopter. (As the helicopter is no longer in use, perhaps the hyphen has been dropped.)  I don’t hesitate to recommend this exciting read to anyone who enjoys a good adventure.

Julie Bellon is a native Canadian.  She attended BYU and graduated with a degree in secondary education.  She currently teaches journalism for BYU Continuing Education and loves to travel.  She, her husband, and eight children live in Utah.