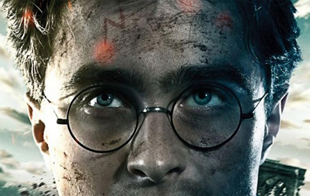 Last night at 3am as I prepared to go to bed, I went to the mirror and wiped off the lightning bolt scar I had drawn on my forehead with eyeliner for the last time. Our double feature movie night that culminated in the midnight showing of the newest Harry Potter was my first participation in an event of that kind It was not my first time dressing up to see one of the films in the series. Rubbing the gunk that the scotch tape left behind on the nosepiece of my glasses was, in its way, the end of an era.

It was, for the most part, a satisfying narrative end for me. They managed to make the conflict real and current while subtlety reminding you of your personal history with the series of films. There was one sequence in the midst of battle where they went through the conflict of each film in order and you saw the troll and the spiders and a werewolf and remembered all the challenges these brave youngsters managed to overcome. The Hogwarts professors that have exclusively belonged to just one or only a few of the movies reminded you that they too are still a part of this world and even though they were all grown up, Harry Potter’s fellow (and overshadowed) students, who had been there since the beginning, showed you that they were still there as well.

The release of the newest Harry Potter book or movie has been as irrevocable and present a part of my childhood, adolescence, and young adulthood as just about any other external element. I can mark the progression of my school years by which Harry Potter film I skipped school to see and which book release party was the hot topic of conversation. I saw the 5th Harry Potter movie in a British cinema; a Palestinian taxi driver dropped me off at the 6th film in the western part of Jerusalem; and now it has culminated in this Viennese double feature. Culminated and now it’s over.

I have always been compelled by the idea of celebrity and phenomenon. I think it is easy to discount things that take a culture by storm as quickly becoming campy or cliché. There is a certain insipidity and decadence associated with the entertainment industry and particularly its biggest celebrities, but I think that it is worth taking note of what catches and what sets the population on fire, and where the appeal lies in things that are successfully influential.

Harry Potter has surely been that, successfully influential, a phenomenon. I watched the final chapter both wildly engaged in its twists and turns and also a step back, intently studying why it works so well. Why do we come out in droves to watch the adventures and triumphs of the boy who lived? The world he comes from is complete with its own rules and conflicts and obstacles and dangers that are unique to it, and so we are completely transported by the tales of living and learning and striving there.

But it’s the people not the place that keep me coming back to the box offices and bookstores. The creator of this story manages to weave in so many true and relatable conflicts and emotions into this world of basilisks and werewolves; unrequited love and complicated relationships when someone wasn’t telling the whole truth and even a school bully. But greater challenges than Draco Malfoy exist in this world.  As I watched Voldemort march with his masses on Hogwarts castle, I was floored by the idea that pure evil is so ruthless, so unyielding that it is hard to find an effective obstacle to put in its path. It is motivated by nothing, but darkness—in essence, it seems unstoppable. But here comes our little cowboy with his wand and his heart, and he manages to be the difference and do what no one else can.

There is power in the age-old hero myth that Harry Potter is in many ways modeled after. He loses his parents from a young age and so is left to find his own way. But he isn’t left completely alone, as mentors are sent to his aid at different times throughout his life, but ultimately the final triumph of goodness is something only he can be responsible for, and it’s been something only he was meant to do all along. The hero in this tale is always set apart for a particular task that at times seems unfathomably difficult, almost impossible. But the truth will out and against all odds this hero will find a way.

We too are set apart for particular tasks and though they may not amount to saving the world, they may essential for saving our own lives. There’s something so compelling and empowering about looking adversity in the face and spitting in his eye. Many said that the later Harry Potter books were very dark and so they were, but piercing through that darkness comes the tenacious beams of greatest light. Our world too will get darker in these later chapters, but we can be those intense shocks of truth in the midst of so much confusion. Being the hero doesn’t mean we won’t experience the confusion of not knowing whether Dumbledore really has pure intentions, the betrayal and anger at best friends that temporarily turn their backs on us, the fear associated with doing this daunting task. But the reality of a complicated, but ultimately victorious existence is what makes Harry Potter so appealing, and it can be your story too.