The Cause of Entitlement, and the Solution | Meridian Magazine

The Cause of Entitlement, and the Solution

Editor’s note: Parent polls from a number of sources, including the Meridian Reader poll, indicate that the most worried-about parenting challenge of all is the entitlement attitudes of today’s kids.  Responding to this concern, the Eyres have undertaken a multi-part series on entitlement which will appear here in the pages of Meridian each Monday.

The Eyres’ next book is THE ENTITLEMENT TRAP*: How to rescue your child with a new family system of choosing, earning, and Ownership.  Parts of that book are excerpted for this series.  Richard and Linda are New York Times #1 bestselling authors who lecture throughout the world on family related topics. Visit the Eyres anytime at www.TheEyres.com

*The Entitlement Trap can now be preordered. See details at www.valuesparenting.com

One day one of our sons, eight year old Jason, (name changed to protect the not-so-innocent) came home from school on an early spring day, and he was missing an article of clothing. You might guess it was his jacket, but in fact it was his shoe!  It was cold outside, and when he came in with just a sopping wet sock on one foot, I reacted in typical parental fashion.  “Where is the world is your shoe son?”

A friendly boy, he reacted conversationally, “Well Dad, the snow is melting and there was water going down the ditch, and Chad and I needed a boat.  The shoe worked great!”

“But son, where IS your shoe?”

“Well, you know where the water goes under the road….the shoe went in the tunnel, but it never came out the other side.”

“Jason! Do you know how much that shoe cost?”

I was there with my hands on my hips, glaring down at him and finally Jason got the message that I was upset, and his instinct was to fight back.  He put his hands on his hips and glared right back up at me.

“What do you mean it was my shoe?”

“Well, you bought it, and you’ll probably have to buy me another one now won’t you!?”

After I overcame a couple of impulses brought on by that last comment, I had an ah-ha moment—I realized something that would change my approach to parenting: Jason felt no sense of ownership for his shoe!  Why would he?  He didn’t buy it; he hadn’t given up anything for it.  He hadn’t even picked it out.  And without the perception of ownership, he couldn’t have felt a sense of responsibility.  What Jason felt instead was a sense of entitlement!  He was entitled to another shoe!

Since then, we have realized that the perception of ownership can not only keep shoes on kids’ feet, it has the potential to greatly simplify parenting and to literally rescue our kids from the entitlement trap.

The whole connecting concept can be diagramed: 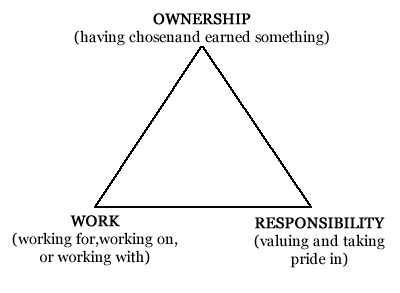 But the place to start with kids is ownership.  Giving them the real (and early) opportunity to own things, from money to choices, is what starts the ball rolling and leads inevitably to work and responsibility.

Begin with the basic ownership of money and what money will buy.  Set up a “family economy” where kids have jobs in the household (taking care of common areas that everyone uses, doing dishes, etc.) and keep track of all that they do and get paid on Saturday rather than getting a something for nothing allowance.  What they get paid is exactly proportionate to how many of their jobs they get done.

The basic process of the idea is to take the money you are already spending on your kids and re-route it through their ownership and choices, and to make the whole thing part of a natural economy where parts of the money that comes into a household goes out to those who do parts of the common work around the home.

The basic premise of the idea is that it is better to have children learning the lessons of earning and spending and saving (and making mistakes in all three) while they are young and the stakes are small than when they are older and the stakes are large (and when banks start sending them pre approved credit cards.)

The basic props of the idea are a family bank (a big wooden box, maybe painted silver or gold, with a big padlock on it and a slot in the top), a checkbook for each participating child (a real checkbook with the child’s name imprinted and with a check register—get them from a bank or a check printing company, or use some old checks of your own), and a basic peg board with four pegs for each child (the bigger the better, and the pegs had better be tied or chained to the board, or they are sure to be lost.)

Work out the details of your family economy according to your own needs and feelings about what is important.  But make sure that the bottom line is that kids earn money, and thus feel ownership of it.  Make it possible for them to earn enough to buy the toys, gadgets and other things they want.

You will still want to have rules about what they can and can’t buy, but within these rules, let them buy what they want.  Let them make mistakes—spending too much on some things and having nothing left over for other things.  It’s better to learn from mistakes while they are young (start them on the economy when they turn eight) than when they are older and consequences are greater.

Once you get your family economy worked out and implemented, just sit back and let it work—observing what a difference a sense of real, owned ownership can make!