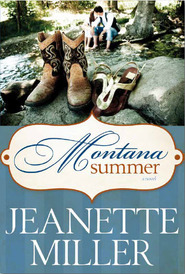 Romance readers will want to remember this name: Jeanette Miller.  Her debut novel, Montana Summer reaches book store shelves this month and will appeal widely to readers of the Romance genre.

Shelby Hamlin hasn’t had an easy life.  Her parents’ stormy marriage and being constantly uprooted from town to town has left her without friends.  Her father’s death and her mother’s refusal to have anything to do with her after she joins the Church, leave her drowning in loneliness until she enrolls at BYU and grows close to her roommates.  Eventually she becomes engaged to a wonderful man who is active in the Church and shares her dream of a temple marriage and children.  He couldn’t be more perfect.

Shelby accepts an invitation to spend part of the summer prior to their wedding with Brad’s family in Montana while he undertakes an important internship.  She’s nervous about meeting her future in-laws, but soon discovers they are the family she has dreamed of all of her life.  A close bond forms between Shelby and Brad’s mother, his father is everything she ever wanted in a father, his sister along with her husband and three children are instant friends.  The only crack in the perfect family is Brad’s older brother, Cameron.

Cameron is moody and borders on rude.  He’s been hurt both by a fiancé who cheated on him and a community and ward who believe her lies.  Rather than defend himself, he is hurt by the people who gossip behind his back and think the worst of him when they’ve known him all of his life and he believes should have greater faith in him.  He stops going to church and neither Shelby or his family know whether or not he has lost his testimony.

Shelby is confused by her strong feelings for Cameron and his mother almost pushes them to be together because she sees him coming out of his dark slump when he is around her.  He enjoys being around Shelby too much and tries to distance himself from her in order not to betray  his brother.  Brad arrives for a weekend and the situation seems to explode with a busy body neighbor making matters worse.

Being a romance, the plot is formulaic to a large extent, but by bringing LDS elements and the use of a dramatic setting into a prominent role in the story, it becomes fresh and new.  The characters are developed well with distinct personalities.  Miller has avoided the traps many new LDS romance writers fall into of converting everyone and bringing a positive conclusion to each dilemma.  This isn’t a conversion story and it isn’t preachy.  It is an LDS themed love story with some major bumps along the way. The rugged Montana background stays in the background, but is a strong backdrop for the adventures that could happen in few other places.

Along with the complicated triangle love story is a firm questioning of values and desires along with some reality checks.  Even good decisions sometimes cause hurt and pain.  Making good choices doesn’t guarantee you won’t be hurt by the choices others make.  Even in the face of neglect and desertion there’s something in the human psyche that continues to seek parental approval.  Communication is a better skill than suffering in silence and it promotes healing instead of festering.

Miller is one of the better romance writers to come along and will likely attract a strong following in a short time.  She has an interesting background, having been born in California then grew up in Guatemala, Puerto Rico, and Costa Rica where her father worked.  She graduated from BYU and has taught elementary school in the Spanish Immersion program.  She’s a fan of the classic English romance authors.  She, her husband, and their six children currently live in Utah.