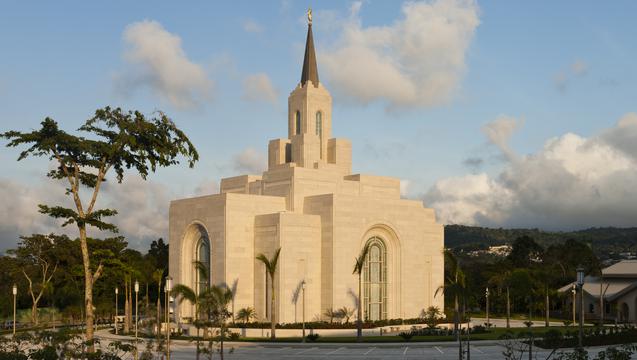 The public is invited to tour the newly completed San Salvador El Salvador Temple of The Church of Jesus Christ of Latter-day Saints, the fourth temple in Central America.

The First Presidency of the Church has announced a public open house beginning Friday, 1 July 2011, and continuing through Saturday, 23 July 2011, excluding Sundays. Public tours are available on Mondays from 9:30 a.m. to 5:00 p.m., and Tuesdays through Saturdays from 9:30 a.m. to 8:30 p.m. (Download b-roll of the San Salvador El Salvador Temple.)

The temple is located in front of the Roberto d’Aubuisson roundabout at El Espino and El Pedregal Streets in San Salvador.

On 21 August 2011, after opening the temple to the public, a member of the First Presidency will formally dedicate it as the Church’s 135th operating temple. Three dedicatory sessions will be held to accommodate the large number of Latter-day Saints in the area who will participate.

The San Salvador El Salvador Temple will serve members of the Church throughout the country. Three other temples are located in Central America: Guatemala City, Guatemala (dedicated in 1984); San José, Costa Rica (2000); and Panama City, Panama (2008). Two more temples are under construction — one in Quetzaltenango, Guatemala, and another in Tegucigalpa, Honduras.

May 1949 marked the beginning of the Church’s presence in El Salvador, when the first missionaries were sent there to preach the gospel of Jesus Christ among the people of Santa Ana in the western region of the country. In 1952 Elder Spencer W. Kimball, then a senior Church leader and later the worldwide leader of the Church, visited El Salvador and offered a prayer of peace and prosperity upon the nation. By 1986 Church membership had grown to more than 15,000. Today there are more than 110,000 Latter-day Saints in more than 161 congregations throughout El Salvador.

The exterior of the San Salvador El Salvador Temple is Bianco Sienna granite from Brazil. Its design is inspired by Spanish colonial architecture from the region, with prominent arches and conches inside and out. Much of the decoration features the flor de izote, El Salvador’s national flower. This flower design is highlighted in the art-glass windows and the exterior granite, as well as in the detail of the interior wood, which is genuine mahogany from Honduras and nearby countries. Flooring and interior ornamentation are of limestone from Israel.

Latter-day Saint temples differ from the meetinghouses or chapels where members meet for Sunday worship services. Temples are considered “houses of the Lord” where Christ’s teachings are reaffirmed through baptism and other ordinances that unite families for eternity. In the temple, Church members learn more about the purpose of life and make covenants to follow Jesus Christ and serve their fellow man.

When the temple is formally dedicated, it will be open to members of the Church who are actively engaged in the faith — unlike the thousands of standard church meetinghouses that are open to everyone for regular Sunday services, regardless of religious affiliation (see Newsroom article explaining the difference between chapels and temples).