Scot Facer Proctor is the photographer for these pictures.

The Mormon Tabernacle Choir, like your mother’s apple pie, signifies all that’s good about America, so it comes as no surprise that Washington DC has been one of their stamping grounds, a place they’ve come eleven times in their history, including singing at five Presidential inaugurations.  Since, they’ve sung for every president of the United States since President Taft, it seemed fitting that Ronald Reagan dubbed them “America’s Choir” when they sang “Battle Hymn of the Republic” to him at his inaugural parade in 1981.

For those of us Latter-day Saints who live in Washington DC, the coming of the choir has been ardently anticipated for several months, and their stop last week on their whirlwind tour of seven concerts in seven days, simply electrified and inspired us. The excellence, the harmony, the passion, the spirituality of hearing the Mormon Tabernacle Choir sing in person is beyond words, and after a remarkably varied program that featured a repertoire of moving songs for all tastes, the crowd could not be contained, but leaped to their feet, weeping and cheering.

The program was over, but we could not let them go.  We clapped and clapped, our hands pleading for just one more song and they complied.  “Be careful,” announcer Lloyd Newell teased, “The choir has over 1,000 songs in their repertoire.” “Don’t go,” we were pleading with our applause.

When they sang “Come, Come Ye Saints”,  the 5600-strong audience were moved, but could probably not comprehend what it meant to the Latter-day Saints who attended.  For us these swelling chords strike into our very pulse and I wanted to shout, “This is me.  This is who I am. This is my story. This is what I know.”  With all their songs, the choir symbolizes that for a Latter-day Saint. These volunteers with the precisely honed talents who swell together in a chorus of praise is our heartland.

So come with us on a visual tour of the event. 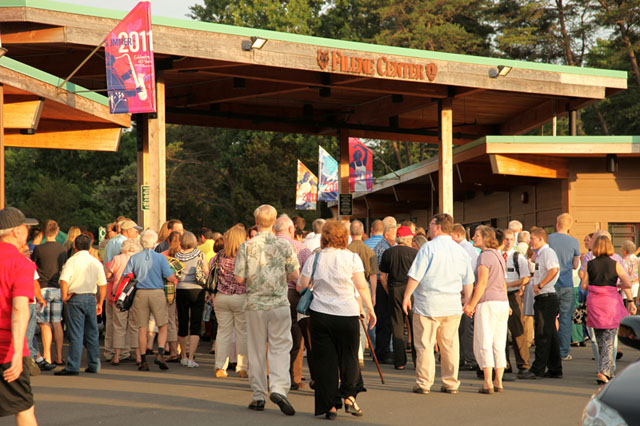 Wolf Trap National Park for the Performing Arts where the choir performed is an outdoor pavilion, an expansive stretch of grass and trees that attract the best-known names and performances in entertainment.  Nobody sells more tickets here than the choir. 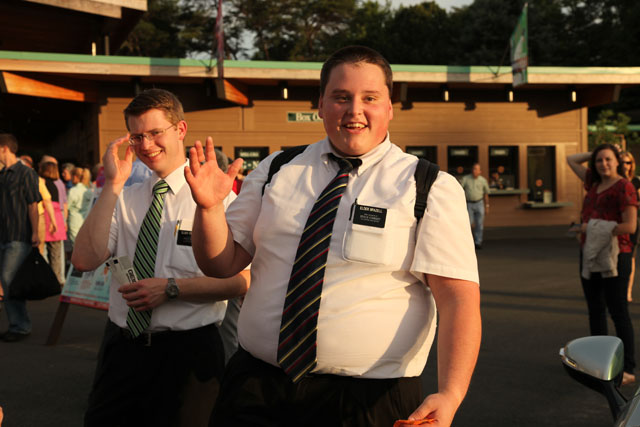 Usually when an audience attends events here they are not greeted by missionaries, but Latter-day Saints brought many of their friends—and, of course, the great bulk of the audience were fans of the choir who know little of the Church.  Elder Brazell and Elder Staples have a friendly wave. 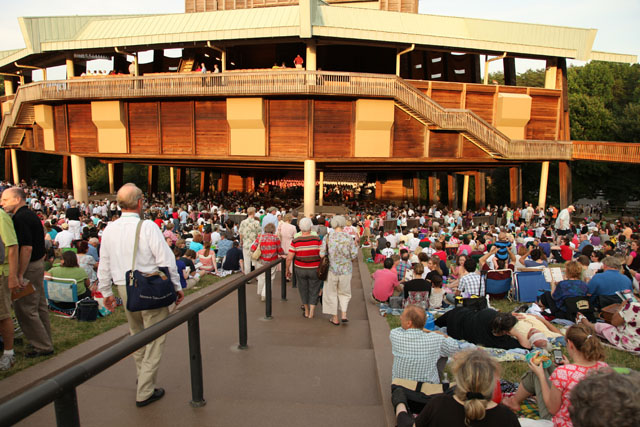 The choir also performed at Wolf Trap in 2003, a night that was so sticky and hot, it took plucky endurance to sing like the masters they are.  This night was warm enough that the men in the choir were allowed something unusual.  They sang in their shirt sleeves. 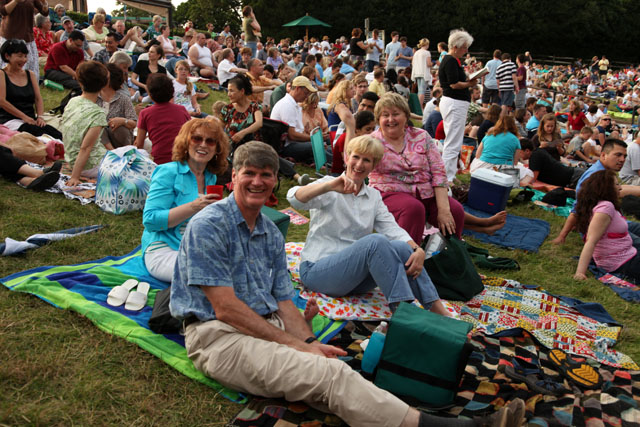 Wolf Trap has a section with seats in a covered open-air pavilion and a spreading lawn where people can picnic and hear performances.  We were delighted to see our friends here—our bishop Steve Johnson, Kathy Johnson, Barbara Dunn, and Sheila Adams. 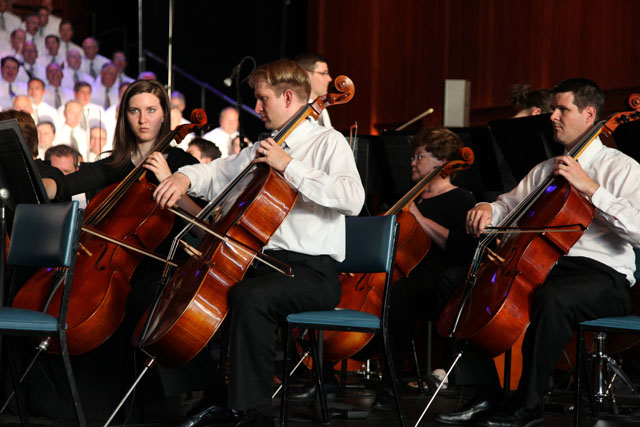 The accompaniment for the Mormon Tabernacle Choir was the Orchestra at Temple Square, a distinct group from the choir, formed in 1999, made up of 110 performers, many of whom have their own professional musical careers. 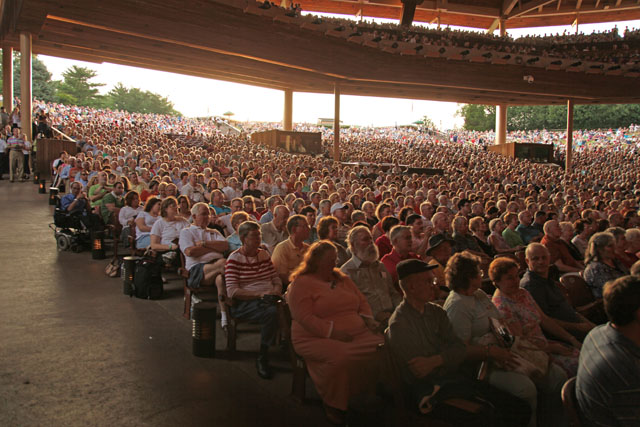 Self-proclaimed “MoTab fans” say, “I can’t begin to describe what it is like to be among them as they sing!” To this vast crowd the choir brought a message of love of God and country, faith and family traditions. 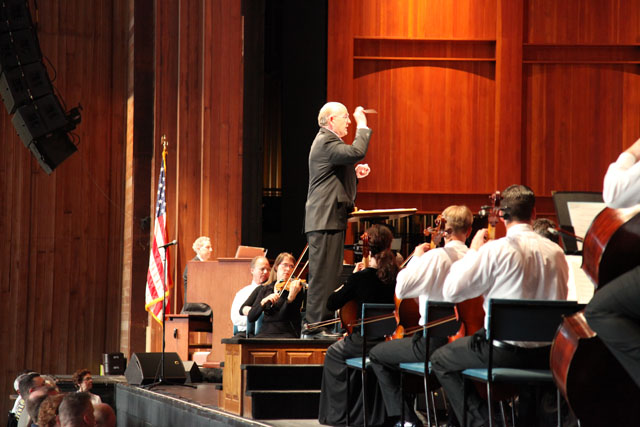 Music director of the choir, Mack Wilberg, is beloved for the stirring songs that he has composed and arranged and has a reputation that is both national and international.  Many choirs use his arrangements. 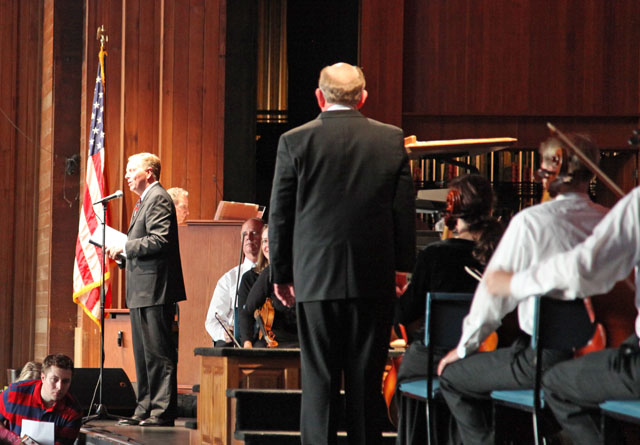 Lloyd Newell, with his resonating tones, is the voice of the choir, who said that the choir first came to Washington DC in 1911.  Then glancing back toward them, he said, “Of course, it wasn’t the same choir,” which drew a laugh. 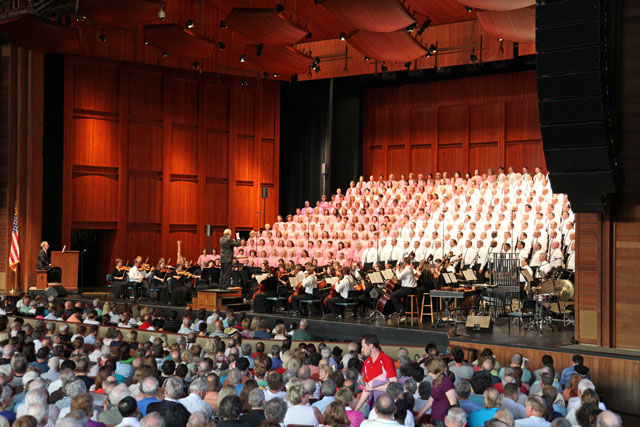 This seven-city tour held one moment of surprise.  At Williamsburg, the choir, dressed just like everybody else, did a flash mob performance in front of a colonial inn. 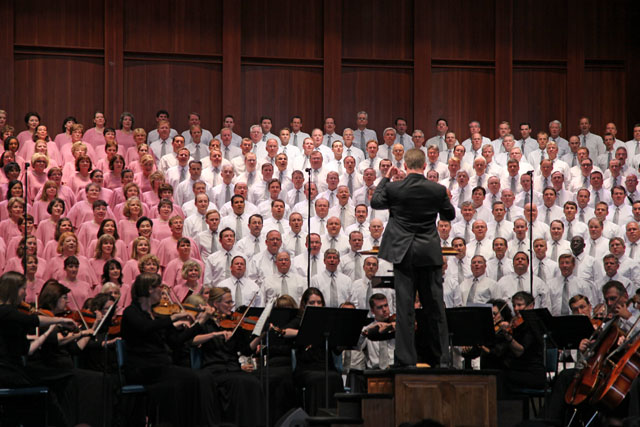 The choir sang familiar songs like “Battle Hymn of the Republic”, but also included a diverse program of two Welsh hymns arranged by Mack Wilberg and such favorites as “Count Your Blessings instead of Sheep,” “Sunrise, Sunset”, and the crowd-pleaser Nigerian carol, “Betelehemu”.  They also sang music of masters like Rossini and Dvorak. 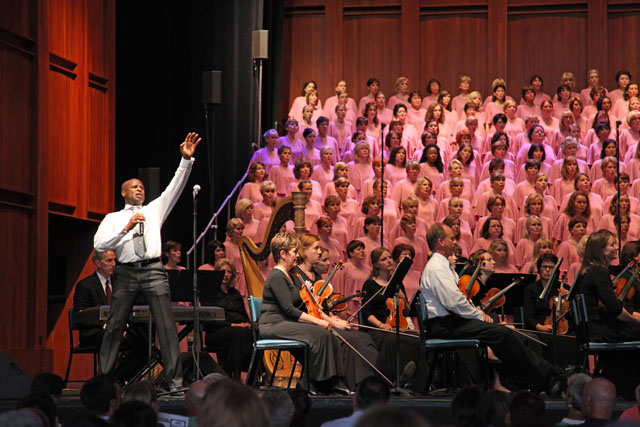 Well-known singer Alex Boye was one of the evening’s stand-outs with a passionate “Rock-a-My Soul” and “He’s Got the Whole World in His Hands”, complete with his own rhythmic dance steps.  He earned his own standing ovation. 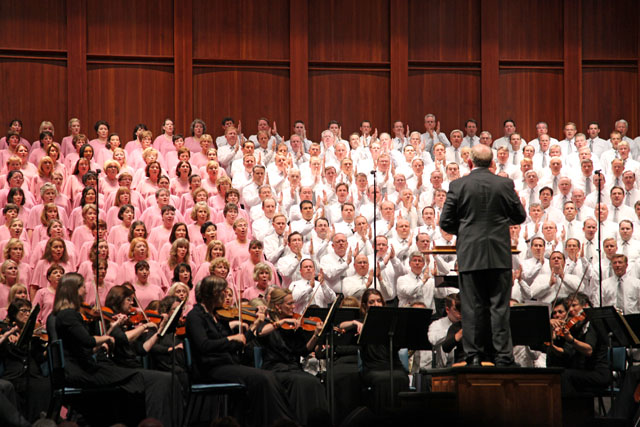 To move a choir this size through the rigors of this kind of performance schedule is an intricate task involving 3 chartered planes and 581 people. Alto Karen Hornberger said the tour will be fun, but it is also a lot of hard work.

“It’s not vacation when we go on tour. Our schedule is really tight. The purpose of it isn’t for sightseeing and to fulfill our own personal agendas,” she said. “We’re performers and we need to remember that and make sure that we’re preserving our energy and getting ready for a concert and not just enjoying ourselves.” 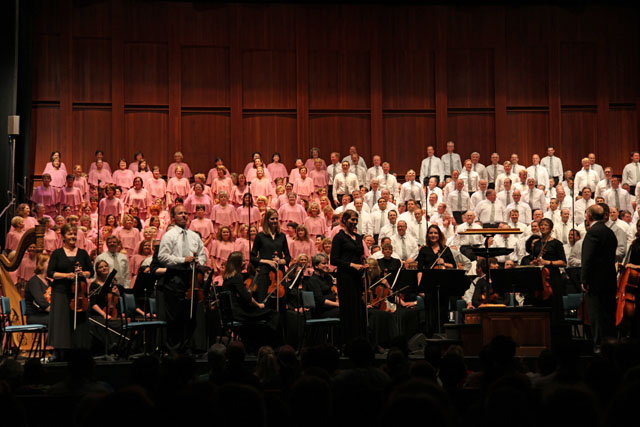 At one point, Lloyd Newell asked choir members to stand it they had any connection to Washington DC, either through having lived here or having close family members who do. 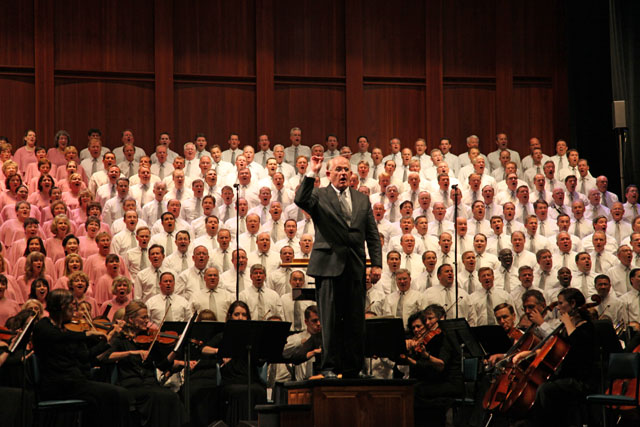 Conductor Mack Wilberg allowed the audience to join in one of the songs and become members of the choir for a moment. 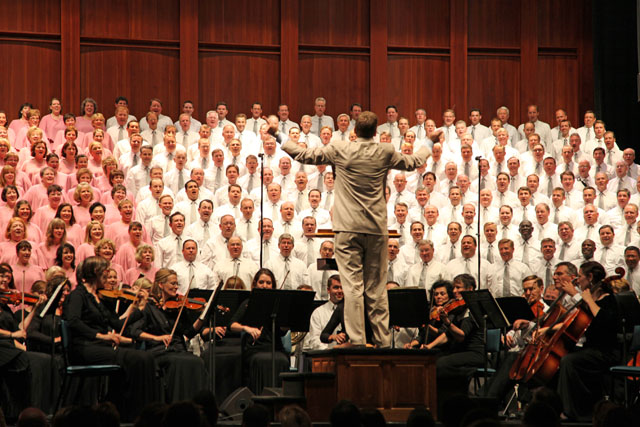 The choir ended with two extra songs, with the crowd’s robust response, bringing them back for more.  The last song, was led by a different dignitary in each spot as guest conductor, including Virginia Governor Bob McDonnell in Richmond and Mayor Michael Nutter in Philadelphia.  At Wolf Trap, the conductor was Senator Mark Warner, who did his best with 10-minutes instruction.

“It was great,” Senator Warner said. “What an extraordinary group of musicians. I only wish my colleagues in Congress worked together as harmoniously as this choir.”