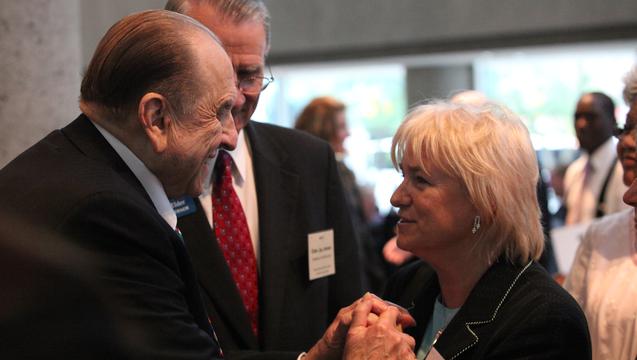 The Mormon Tabernacle Choir and Orchestra at Temple Square wrapped up their 2011 summer tour in Toronto, Ontario, Canada, on 27 June 2011 with President Thomas S. Monson of The Church of Jesus Christ of Latter-day Saints in the audience.

The choir gave matinee and evening performances for packed houses at Roy Thomson Hall. This marks the sixth time the choir has performed in Toronto; the first visit was in 1958 and the most recent in 2007.

President Monson, who lived in Toronto from 1959 to 1962 while serving as a mission president, said he was happy to return to an area he loves.

“To me, coming to Canada, particularly to Ontario, is much like coming home,” he said. “I’m glad the choir is sharing its talents with Canada.”

President Monson is the adviser to the choir and says it is one of his favorite assignments. He told a group gathered for a reception before the concert to listen to the music with their hearts.

“I do not hesitate to profess that there is no finer choir in the entire world,” he said. “Perhaps you have listened to their albums or seen them on television. Until you have experienced a live concert, however, you cannot appreciate all that they have to offer.”

President Monson was accompanied at the concert by his daughter, Ann M. Dibb, and Elder Jay E. Jensen of the Presidency of the Seventy.

Other dignitaries at the concerts included government officials from Canada, the United States, China and the Philippines, as well as local religious leaders. The guest conductor for the matinee performance was Father Thomas Rosica, the chief executive officer of the Salt and Light Catholic Television Network.

Father Rosica said he wanted to conduct to show his appreciation for the help provided by The Church of Jesus Christ of Latter-day Saints during the visit of Pope John Paul II to Toronto in 2002.

“When I got the opportunity to conduct, how could I say no?” he said. “I’ve always loved the Mormon Tabernacle Choir. It’s America and American religion at its best; the collaboration, the joy, the pride, the beauty, and the Christianity that comes across through this beautiful music. So it’s a real honor to be here.”

The guest conductor for the evening performance was singer and songwriter Jerry Gray, who founded the folk rock band The Travellers. Gray said it was a highlight of his career to lead the choir in the Canadian version of “This Land Is Your Land,” to which wrote the words.

“The reaction from the choir was electric to me because they got into the same feeling that I had, it seemed like to me,” he said. “It was an electric evening, for me for sure, and I hope for them as well. It was a great fitting ending to their tour.”

Gray said the power of the choir lies in their ability to reach a wide audience.

“It covers all the bases. It’s patriotic; it’s religious but not overly religious,” he said. “It speaks to all faiths, and that’s a very important part of the music, to speak to everyone.”

Popular Canadian broadcaster Hana Gartner, who was the guest conductor the last time the choir visited Toronto in 2007, stopped by during the afternoon sound check to say hello.

“It’s amazing that it’s four years ago because it is like yesterday,” she said. “I told them [the choir] today there are a lot of visiting conductors that come before them and wave little sticks at them and don’t know what they’re doing, and the fact that they even remembered me and I was invited back like an old home week to say hello is beyond words. I am incredibly touched.”

In the audience for the matinee were two men from England who flew to Toronto specifically for the concert. John Davis Jr. surprised his father with the trip for his 80th birthday because John Davis Sr. has been a fan of the choir for over five decades.

“It was absolutely magnificent. It was worth the time and the travel. We thoroughly enjoyed ourselves,” John Davis Sr. said. “I just find their music so inspiring. It’s absolutely wonderful.”

John Davis Jr. said his entire family contributed to his father’s birthday trip, which was built around the concert.

“I was racking my brain about how we could celebrate 80 years of inspiration and what would mean the most for my dad,” he said.

The Davises both said their favorite number on the program was “Battle Hymn of the Republic,” which John Davis Sr. has loved for many years. Both men said the concert was an unforgettable event.

“You can see all the DVDs and TV concerts, but there’s nothing like being there,” John Davis Sr. said.

The concert marked the end of the choir and orchestra’s eight-day tour of the Eastern United States and Canada. The volunteer musicians also performed in Norfolk, Virginia; Washington, D.C.; Philadelphia; and Chautauqua, New York.