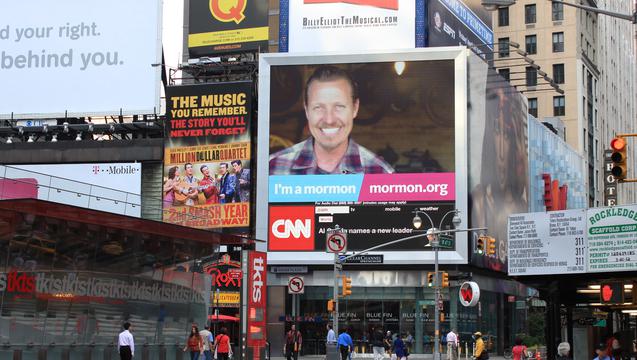 With increased conversations about Mormons taking place in New York City, the Church launched the “I’m a Mormon” campaign there this week.

”Our Church is known for our efforts to share our message,” said Elder Richard G. Hinckley, Executive Director of the Missionary Department.  “During the past several decades we’ve used media focusing primarily on what we believe.  This effort focuses more on who we are because of what we believe.”

Billboards in Times Square, signs on taxi tops and ads in subways feature a few of the 14 million members of The Church of Jesus Christ of Latter-day Saints with the statement “I’m a Mormon.” The ads refer people to the mormon.org website, where they can read the profiles of more than 30,000 Mormons, chat live with representatives who will answer questions about the faith, and watch dozens of videos giving a glimpse into the lives of Latter-day Saints from all over the world.

This latest campaign is a continuation of an undertaking that was launched in nine cities last year.  The effort seeks to break through the stereotypes of what people think they know about Mormons and demonstrates that the Church consists of diverse people from all walks of life who seek to follow Jesus Christ. That message seems to resonate with those seeking to better understand Mormons. 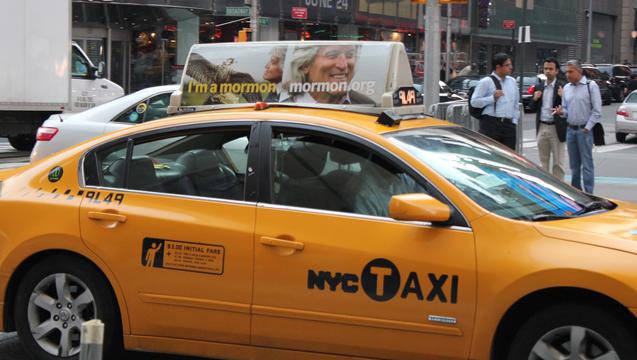 The diversity of Mormons is reflected in New York City, where Church membership has grown rapidly in the last decade. Since 2000, membership has increased by 75% to 78,000 members in New York state. The common thread that ties the diverse membership together is their desire to follow Jesus Christ.

The mormon.org website, first launched in 2001, was overhauled in 2010 to make individual Church members the focus. Rather than just a resource to learn what Mormons believe, the site now introduces curious visitors to thousands of Mormons who share what they believe and how their faith impacts their lives. Mormon.org has as many as one million unique visitors per month (for more information on the profiles on mormon.org, see the news release from July 2010).

“It is one thing to read a list of beliefs and to try to determine what it all means.  It is quite another to see those beliefs in action in an individual you know,” said Elder Hinckley.  “This is one way to get to know us—through the lives of members of The Church of Jesus Christ of Latter-day Saints.”

Following the effort in New York City this summer, the Church will launch ads in additional U.S. cities this fall.