LDS Fiction: Foggy with a Chance of Murder | Meridian Magazine

LDS Fiction: Foggy with a Chance of Murder 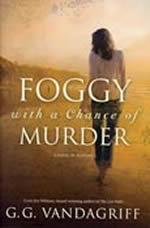 Chloe Green escapes her mother’s party at her beachfront home by taking a walk on the beach, a beach filled with memories of crushing heartbreak.  The event that follows in Foggy With a Chance of Murder by G.G. Vandagriff is as heartbreaking as her personal memories.

Chloe is a famous mystery-suspense writer who has traveled all over the world, living in the various locations where her novels are set.  Gone for ten months at a time, each time leaving behind the man she loves, she is devastated when he tells her of his plans to marry someone else while walking on that beach behind her mother’s home. I couldn’t help wondering why she was surprised; regular ten month separations aren’t exactly conducive to romance.

Upset that her formerly take-charge mother has become an alcoholic, Chloe escapes to the beach and is devastated when she fails to save a ten-year-old boy who has gone into the ocean alone.  Eventually she learns the child was being watched by his alcoholic aunt who in an alcohoic haze forgot about him.  As both Chloe and the boy’s father, Rob Stevens, struggle with problems brought into their lives by an alcoholic loved one, a bond grows between them.  Living in neighboring beach houses, they become increasingly involved in each other’s life until Chloe is uncertain whether her feelings for Rob matter more than the strong feelings she still harbors for her lost love.  This dilemma causes her to evaluate her former romance and ask the same question I asked about those extended and unnecessary separations. The trials they’ve faced also have them both struggling to believe a Greater Power exists, until a neighbor gently leads them each to a better understanding of God.

Several attempts on Rob’s life and the takeover of his factory in Jakarta leave them both on edge.  Further complicating their suspicion that he is a target of a terrorist attack that not only involves his company but a large oil tanker, is the discovery that his sister is an alcoholic because of something traumatic that happened to her while she was in college and the arrival of Chloe’s former lover who is now newly divorced.  Rob begins a search for his sister’s former college friends, roommates, and boyfriend in an effort to learn what event traumatized her during her final year of school, thus stirring up a fourteen year old tragedy.  Chloe’s former lover is ready to pick up where they left off and she discovers doubts and trust issues she didn’t expect.

Fog plays a major role in the story as it provides cover for would-be assassins and hides attempts to rescue or to follow.  Fog also seemed to enshroud me as I tried to figure out why the sister was so severely traumatized by an infraction for which she was far less culpable than for her more recent negligence which resulted in the death of her nephew.  I also had difficulty, too, with the odds of two women using only tasers and  one of them completely inexperienced, capturing six armed men, at least one of which had an AK-47.  This scene was a little over the top for me.  The whole terrorists issue feels remote as though seen through the fog.  The alcoholism issue and attendant factors lose immediacy because of the coincidental timing with the terrorist situation.

Vandagriff liberally sprinkles her novel with exotic places from around the world and menus overflowing with French and Italian delicacies.  She writes in an old world dreamy, moralistic style reminiscent of the early Phyllis Whitney, Victoria Holt era of romantic mysteries.  She also pays more attention to ambience and background than is usual in most modern novels. Her characters are more upscale and cosmopolitan than those found in most LDS novels which some readers will find a welcome change of pace, others will not.

Vandagriff studied writing at Stanford University and later received her master’s degree from George Washington University.  Foggy With a Chance of Murder is her tenth novel and distinctly different from her previous books.  She received the 2009 Whitney Award for Best Historical Fiction for her novel, The Last Waltz: A Novel of Love and War.  She and her husband have three children and two grandchildren.  They have traveled a great deal, but presently call Provo, Utah their home.