Dr. Ogden is a professor of ancient scripture at Brigham Young University. 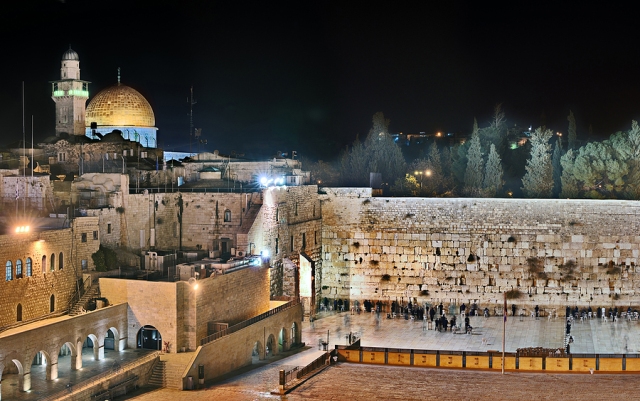 The land that in recent centuries has been called Palestine and Israel was promised in ancient times to the descendants of Abraham.  Though the covenant was established particularly with a certain line of Abraham’s descendants—that is, through Isaac and Jacob (or Israel; see Genesis 17:19-22)—yet the blessings of the covenant, including land inheritance, were promised to all who would come unto God and keep his commandments and thereby become “covenant people” (see Abraham 2:9-11; 2 Nephi 30:2).  The promise of land inheritance for Abraham’s descendants was based on obedience to the laws of God—“that ye may prolong your days in the land, which the LORD sware unto your fathers to give unto them and to their seed” (Deuteronomy 11:9; see also verses 16-17, 21; Abraham 2:6).

The current political conflict arises from the fact that other descendants of Abraham, the Arab Palestinians, have had a long and continuous physical presence in this same land, which supports their claim to rightful or legal title to that land.  The land to which millions of Jews are returning in our day, after an absence of two thousand years, has been inhabited by so many nations, tribes, and peoples that by today’s standards of international law, it would be questionable for anyone other than its present indigenous inhabitants to lay claim to it.  As far as Arabs are concerned, the Jewish presence in their land is based on neither “divine right” nor “historical title” but on occupation by military force.

“And it shall come to pass, that ye shall divide [the land] by lot for an inheritance unto you, and to the strangers that sojourn among you, which shall beget children among you: and they shall be unto you as born in the country among the children of Israel; they shall have inheritance with you among the tribes of Israel” (Ezekiel 47:22, emphasis added; see also Isaiah 14:1).

It appears, therefore, that both the tribes of Israel and the Palestinians have a divine commission to come to terms acceptable to each other.  In fact, the biblical term strangers means sojourners who have similar obligations, rights, and privileges (see Brown-Driver-Briggs, A Hebrew and English Lexicon of the Old Testament, Oxford, England: Clarendon Press, 1975, 158).  In other words, both groups must realize that living in Israel is not an “either/or” proposition, and that the peoples, present or future, in that part of the Lord’s vineyard must be prepared to accommodate each other.

Eventually, all peoples will have to learn that “righteousness before the Lord” is far more important for obtaining God’s blessings than lineage or longevity alone (see Galatians 3:26-29; Abraham 2:10).

At the root of the political conflicts in the Holy Land are religious feelings that bind Jews, Christians, and Muslims to the Holy Land, and particularly to Jerusalem.  Mixing religion and politics often leads to the deepest human emotions and to intense attachments and tenacious devotion to places and symbols.  Three of the world’s major religions hold sacred the nearly 40-acre site known as the Temple Mount or Haram esh-Sharif (“the Noble Sanctuary”).  Jews and Christians recall Abraham’s near-sacrifice of Isaac on the site where later two great Temples of the Lord stood for a thousand years.  Muslims, on the other hand, honor Abraham’s near-sacrifice of his son Ishmael and the tradition of Muhammad’s ascension into heaven in a night vision, where thirteen centuries ago adherents of Islam constructed a shrine (the Dome of the Rock), which stands to this day.

The scriptures clarify that the ultimate source of peace in the Near East and in all the world is the Messiah himself.  John foresaw the time when “the kingdoms of this world are become the kingdom of our Lord” (JST Revelation 11:15).  And Isaiah revealed that “the government shall be upon his shoulder: and his name shall be called Wonderful, Counsellor, The mighty God, The everlasting Father, The Prince of Peace.  Of the increase of his government and peace there shall be no end” (Isaiah 9:6-7, emphasis added).

Meanwhile, from this present time until the coming of the Lord, how should we as Latter-day Saints view events in the Near East?  Should we passively wait for an “inevitable Armageddon”?  Or is there something we can do to actively and affirmatively promote peace?

There seems to be a natural human tendency to take sides.  We seem to believe that there’s a right and a wrong to every situation.  But partiality can breed divisiveness and closed-mindedness.  It can also create distrust and inhibit an atmosphere of mutual respect and understanding needed for peace.  If we take sides in a political context, we compromise our ability to reach out to both sides.  We would do well to remember the words of a statement issued to the world on behalf of the Church:

“We reaffirm the long-standing concern of The Church of Jesus Christ of Latter-day Saints for the well-being and intrinsic worth of all people.  Latter-day Saints believe that ‘God is no respecter of persons: But in every nation he that feareth him, and worketh righteousness, is accepted with him’ (Acts 10:34-35).  All men and women are children of God” (Press release, October 18, 1992).

President Howard W. Hunter admonished Church members to remember that “both the Jews and the Arabs are children of our Father.  They are both children of promise, and as a Church we do not take sides.  We have love for and an interest in each.  The purpose of the gospel of Jesus Christ is to bring about love, unity, and brotherhood of the highest order.  Like Nephi of old, may we be able to say, ‘I have charity for the Jew. . . . I also have charity for the Gentiles’ (2 Ne. 33:8-9)” (“All Are Alike Unto God,” Brigham Young University Fireside, February 4, 1979).

The message of the restored gospel of Jesus Christ is the source of peace and calm and reconciliation in the face of sometimes harsh political contention between peoples and states.  As Latter-day Saints we can help prepare the world for the time of the Lord’s coming and a millennium of peace by teaching and living gospel principles.  We can also help lay the foundations for peace by learning about and respecting various nations, peoples and ethnic groups—their histories, cultures, religious beliefs, and languages (see D&C 88:78-80; 93:53).

It is hoped that Latter-day Saints can help provide a bridge of understanding between Arabs and Jews in that troubled region of the Holy Land and that to the extent that we look with sympathy and understanding at both sides, we can be an influence to help bring about a just and lasting peace.