Volunteer Army of Over 3,500 to Help Produce Church Summer Pageants 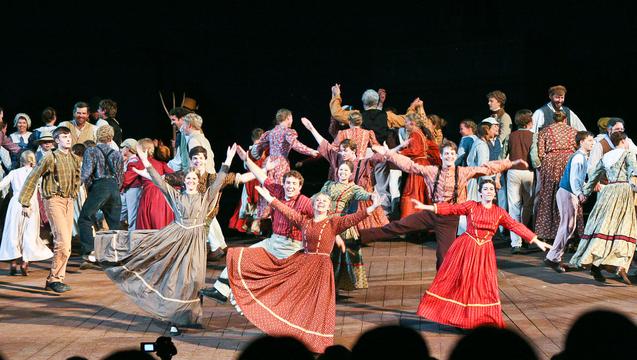 Life-changing experiences can come in unexpected places. When a friend encouraged R. Glenn McMinn and his wife to volunteer for the Nauvoo Pageant, the couple accepted, even though Glenn didn’t think they would have time. However, the McMinns enjoyed the experience so much that they volunteered the next year, and then they were asked to serve as full-time pageant administrators for 24 months.

“[We wanted] to experience the blessings of sharing the gospel through a medium that was new to us,” Glenn said. “We were blessed in so many ways that it was life changing.”

See a video of the pagent here.

Many have similar stories. The McMinns are two of more than 3,500 volunteers who will help produce one of the Church’s four 2011 summer pageants. Church pageants are large outdoor productions that highlight stories from Church history and the scriptures through music, theatrical dance and dramatic spoken word. All actors are volunteers, and admission is always free.

Laurie Bishop and her family (including 12 children) have helped with the Manti Pageant for 17 years. Like the McMinns, the Bishops view their service as a way to share their beliefs with others.

“The month of June is a time when we increase our testimony in the gospel and try to share with others what we believe,” Bishop said. “We do this because of the happiness and joy that we get from doing the pageant and helping others to see what we believe.”

This year’s Manti Pageant begins 16 June and has a cast of approximately 900 people. Manti Pageant president Douglas L. Barton said approximately 600 cast members are 18 or younger, and they are a key force to set up the 14,000 chairs for the audience on the hill of the Manti Temple in one hour.

The Manti Pageant storyline covers the beginnings of the Church and the history of the pioneers who settled Utah’s Sanpete Valley. Performances begin at 9:30 p.m., and more information can be found at mormonmiracle.org.

The Nauvoo Pageant, which starts 5 July, was rewritten in 2005 to commemorate the 200th birthday of the first Church president, Joseph Smith. In addition to the pageant, the Nauvoo historical sites feature daytime vignettes where cast members share the history of the site through smaller intimate performances.

A core cast of 20 actors delivers its lines each night, joined on stage by an ensemble of 150 cast members. Together, they re-enact the lives of Mormon settlers in the 1840s who struggled to build a city and find peace on the swampy banks of the Mississippi in western Illinois.In doing so, the Nauvoo Pageant pays tribute to Joseph Smith, commemorates the building of the original Nauvoo Temple and celebrates universal themes of faith, family and community.

Nauvoo Pageant president John Ricks said a total of 850 people will help with this year’s events. Preshow activities begin at 7 p.m. and the pageant starts at 8:30 p.m. More information can be found at nauvoopageant.org.

Located in upstate New York, Palmyra is where Mormons believe Joseph Smith received divine visitations to restore the same religious doctrines that Jesus Christ had established when He lived on the earth. This pageant begins 8 July and is performed on the Hill Cumorah, the place where Joseph Smith received the sacred record that later became known as the Book of Mormon. The pageant attracts anywhere from 6,000 to 9,000 people each night. 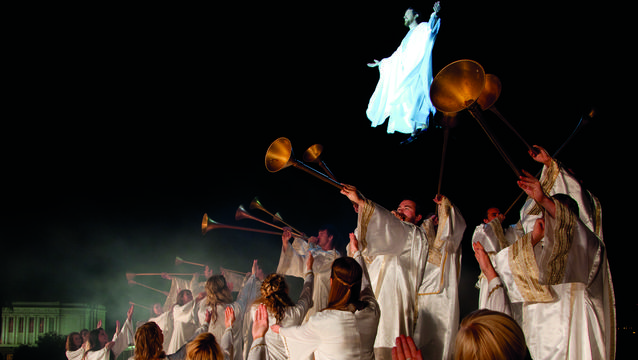 Karen Belnap, her husband and their four children are second-year cast members. Karen said her favorite part of the pageant highlights a core belief for Latter-day Saints — namely, that Jesus Christ is the Savior of the world.

“I expect that it would be obvious from the entire pageant, especially from the climactic scene in which the Savior appears personally, that Mormons most devoutly believe in and worship Jesus Christ as the Son of God and the Savior of the world,” Belnap said. “It’s all about the Savior, really.”

In addition to the emphasis on Christ and His mission to bring peace and happiness to everyone, the storyline of the Hill Cumorah Pageant explains the history and message of the Book of Mormon.

Hill Cumorah Pageant president Dwight Schwendiman said there will be 750 cast members this year who will log a combined 200,000 hours of service. Performances begin around 9:15 p.m. More information can be found at hillcumorah.org/pageant/.

The Clarkston Pageant begins 29 July and highlights the life of Martin Harris, a man who was important in the early days of the Church. The pageant, now in its 27th year, honors Harris for his financial contributions toward the 1830 publication of the Book of Mormon and the inspiration he was to the early Latter-day Saints.

Jeff Richins, who has played the role of Martin Harris since 2006, said he wants visitors to come away from the pageant with a deeper understanding of what the Church is all about.

“It is my hope that anyone who comes to the pageant is able to feel the passion we have for this message and the knowledge that God does speak today through a prophet and that anyone who will read the Book of Mormon can know of its truthfulness,” Richins said.

A rewriting project that started several years ago for the Clarkston Pageant will be completed this year and includes the introduction of a new set. Reservations are required and can be made by calling 1-866-537-8457 or 1-801-570-0080. More information can be found at martinharrispageant.org.

Two other pageants, the Castle Valley Pageant in eastern Utah (held every other summer in even-numbered years) and the Mesa Easter Pageant in Arizona, are also produced by the Church.

With any of the pageants, the Nauvoo Pageant’s Glenn McMinn hopes people of all faiths come away with a deeper appreciation of the lives of those from early Latter-day Saint history and scripture.

“These stories help us sort through the cobwebs of life to find those things and paths that lead to lasting meaning,” McMinn said. “It can be a life-changing experience for those both of our faith and not of our faith.”