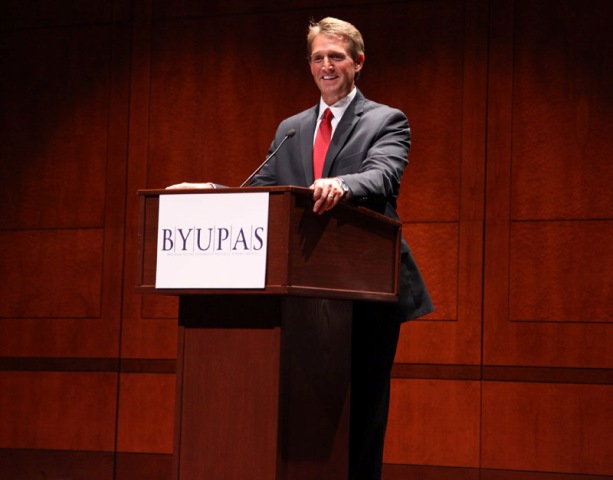 All Photographs by Scot Facer Proctor

Finding a job and building a career anywhere is tough just now, but if you want to find open doors to fascinating work  amid the granite buildings of Washington DC, it isn’t going to be easy.  Everybody wants to work in the international arena or for CNN or have an influential lobbying job or do something that feels significant, and it doesn’t take long before you find out that just sending your resume in to a website, no matter how qualified you are, along with the thousand other resumes, doesn’t get you anywhere. 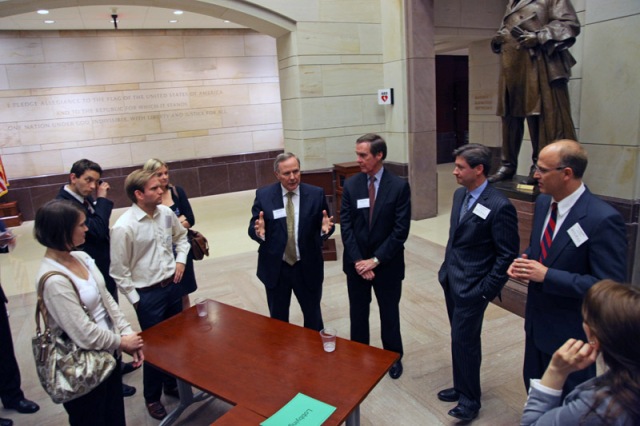 Enter a new program called Cougar-Blue Mentor sponsored by the BYU Public Affairs Society where students and recent graduates are matched with mentors based on their area of interest to help young professionals in their ongoing search for opportunities and employment in Washington DC.  It’s a way for doors to be opened, contacts made, and having experienced professionals make themselves accessible to those who want to find a way to a bright future.

This past weekend at a two-day conference called “Beyond BYU:  Washington D.C.”, three hundred young people came  to have their questions answered, find mentors and network.  They gathered in clumps around professionals to ply them with questions about how they got their foot in the door and how they became successful in eight areas of interest: congressional staff, lobbying, law, communications, non-profit, foreign affairs, national defense, and campaigns on Thursday night, and then Friday spent times in the offices of the same groups. 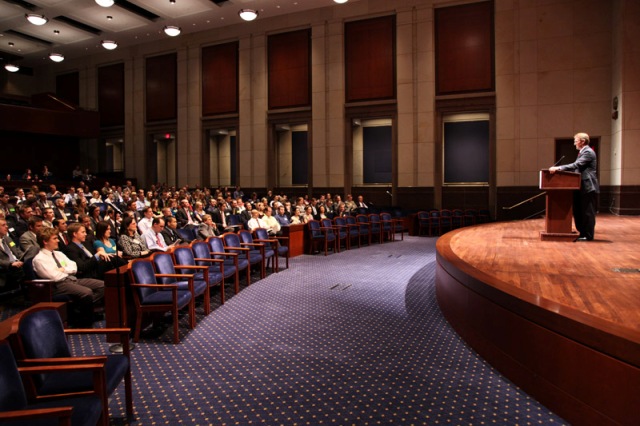 Keynote speaker, U.S. Congressman Jeff Flake, (R-AZ) told the group how critically important mentors had been in his life. He grew up in Snowflake, Arizona named in part for William Jordan Flake, who came to pioneer the area in 1878 and “instilled in his kids a desire for public service.”  His son, James Madison Flake, was deputized to arrest an outlaw, who shot at him, and the first bullet went through his ear, leaving him deaf for the rest of his life. The second bullet killed his brother.

Still, he was active in politics until late in his life.  When he could barely hear, he sat with his other ear leaned up close to the radio so he wouldn’t miss the news.  “My father has often said I got my desire to learn about politics and foreign affairs from him,” Flake said.  If so, he also got a download from his father,  too, who was the last of the “Arizona cowboy legislators” and “with his gentle, measured tones sounded like the stake president he had been while at the state legislature.”

It didn’t take much, then, to persuade young Jeff Flake, newly married to load up an old Volkswagen with a trailer on the back and head to Washington DC.  “We looked like the Beverly Hillbillies,” he laughed, “though we weren’t rich like they were.”  With only $1500 to their name to start a new life,  a blizzard, and sickness along the way, Flake’s wife, Cheryl, said, “Promise me it will never get any worse than this.”

For Flake,  it was the beginning of a series of important mentorships, enjoying among others the advice of Sen. Jon Kyl, whose seat he is running for in 2012 when the senator retires.  Sen. Kyl told him to make his family a part of everything he does.  He said if your family is going to stay in Arizona, make sure they come to Washington DC frequently, and then they will revel in it rather than resent it.  “Sometimes that means only choosing a time to wave at them from C-span.” 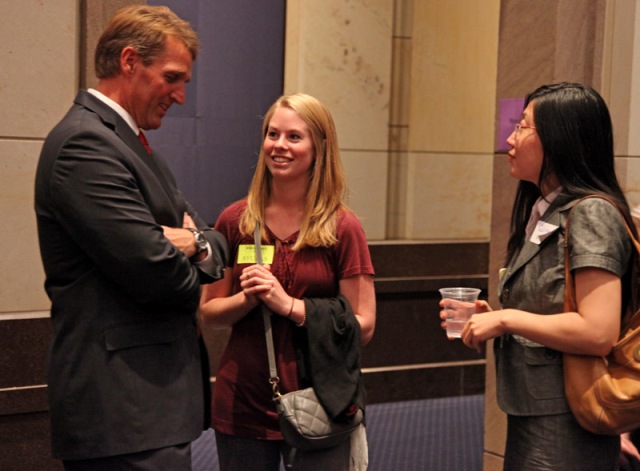 Flake said he won’t discount the challenge of commuting 30 weeks a year, but it has brought some fun moments.  On one trip with President Bush on Air Force One, he was told he could use the Air Force One phone to call anyone he wanted with the knowledge that when the recipient on the other end picked up the phone they would hear, “Air Force One calling for…”

Somewhere over Kansas he picked up the phone and thought, “I’ve got to do some home teaching.”  He thought of a Brother Sid Stevenson in his ward who wasn’t doing well and to whom he had given a blessing just a few days earlier. “Sid got on the phone and was all impressed.”  Just then the President walked by  and Flake asked, “Mr. President, would you mind saying hello to a friend of mine.”  The President did and said, “A lot of people up here are concerned about you.”  Flake laughed, “There was silence on the other end of the phone. Sid, undoubtedly, would also be impressed to know that Flake has been asked to play basketball in the White House with President Obama. “I guarded the President, and he guarded me,” Flake said.

Flake also assured the BYU students that Mormons were well respected in the nation’s capital.  He said he had run into Robert Mueller W. Mueller, head of the FBI, who told him, “Many members of your Church work for us.”  Flake asked:  is it the language abilities? Is it because Mormons can pass background checks? Mueller said yes, and it’s more than that.  Your Church trains people so they everything you could want in an employee.”

Flake said, “The longer I’m here, the more appreciation I have for those individuals who founded this country, and the system of government we have.  It is the most self-correcting system anywhere on the globe with its checks and balances..  One goes too far, someone else comes along to change the momentum.”

Several students from BYU were able to come to the conference with special scholarships.  Alissa Wilkinson, studying political science, said that after visiting several offices and speaking with professionals, “Graduation doesn’t need to feel as daunting as it has in the past.” She is planning to move to Washington DC after graduation next April now knows there “are individuals ready and willing to help each of us establish ourselves in the professional world. Finally, what struck me as most important is the solemn duty that each of us as to being involved citizens, which was stressed throughout the conference.” 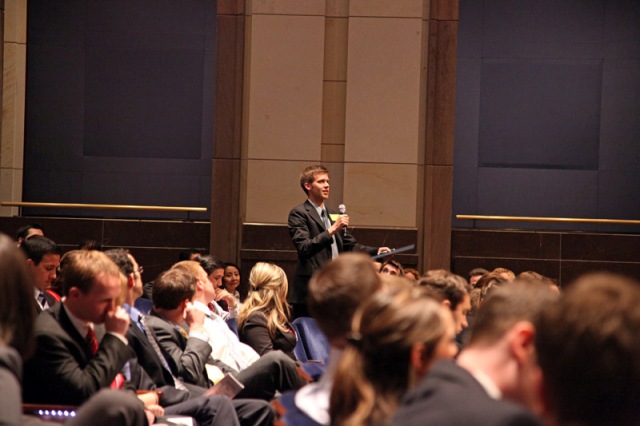 Swadeepa Bohara, a BYU graduate from Nepal, recently graduated with a bachelor’ degree in International Relations and Business Management.  Bohara hopes to go back to Katmandu, after a stint in Washington DC and work with development agencies and non-profit organizations.

Bohara said, “Over all, it helped me understand myself better and understand where I am and what I need to improve on to be more competent and outstanding. It was a great opportunity for a recent graduate like me to get a firm ground to start with by reaching out to a wider network or alumni and professionals.

It was so wonderful to see how these busy professionals were still committed to helping their alma marter. BYU’s motto “Enter to learn and go forth to serve” really extends beyond and being able to sit in the same room with Congressmen Jeff  Flake and Senator Harry Reid and listen to them as a public service officers and personal experiences was amazing.” 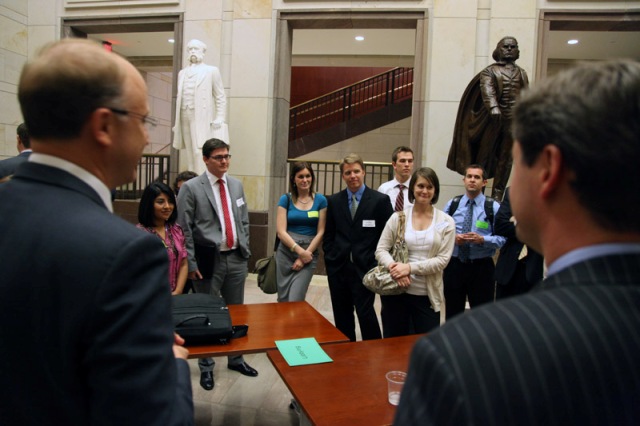