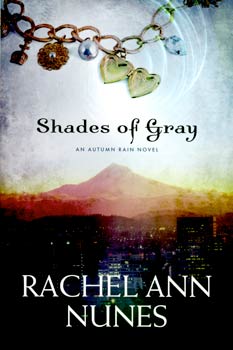 Shades of Gray is an apt title for Rachel Ann Nunes’s latest novel in which evil characters possess redeeming qualities and good ones don’t always have exactly the kindest, most honest motives. There may be a little gray shading on her publisher’s part as well.  For those of us who grew up with an image of Deseret Book as the staid, all things doctrinally straight arrow, paranormal is a big jump.  Shades of Gray is the second paranormal novel by Nunes published by Shadow Mountain, an imprint of Deseret Book.

Autumn Rain is a quirky character who runs around sans shoes, eats only health foods, and has a strange gift called psychometry.  Psychometry is the alleged art of being able to divine facts concerning an object as it relates to a person who experienced strong emotions, negative or positive, while the object was in his/her possession.  It is not generally associated with occultism, but falls more in the category of ESP, out-of-body experiences, and divining rods.

Autumn also has a twin sister who was raised in a more conventional home than the hippie commune that was home to Autumn. She’s married and expecting a child.  She too has a strange gift in that she has the ability to draw scenes that flash into her mind that portend something that is about to happen. Autumn also has a serious boyfriend, Jake, who runs the herb shop next door to her antique shop. He’s big, muscular, and wears his hair in dreadlocks.

Autumn’s sister brings a friend to her in hopes she can tell the friend something about her husband’s disappearance.  Dennis is a happily married man with two small children, a great job, and a new house, so why has he disappeared? The reading doesn’t bring the friend comfort, but it does begin a complicated chain of events as both Autumn and the police officer she calls begin searching for the missing man.

Autumn’s relationship with Detective Shannon is mixed.  They’re both adversaries and admirers of each other.  There’s a strong attraction between the two, but it has nowhere to go with his dislike for her skill and wariness of her odd social non-conformity, and she finds his bossiness and attempts to circumvent or dismiss her involvement in solving crimes a major stumbling block.

Besides she’s in love with Jake.  Only all is not smooth sailing with him.  A former girlfriend, who is obviously still in love with him shows up seeking his help in obtaining evidence against a contractor she believes cheated her so he can buy her property at a reduced rate.

When a crime syndicate boss becomes involved in the search for Dennis and a three-year-old boy is kidnapped, the action goes into overdrive and Autumn and Shannon become semi-reluctant co-investigators.

Nunes can always be counted on for complexity in her plot line.  She keeps the reader guessing with the many twists and turns in the story and she provides more character depth than is usually found in books of comparable length.  Though Autumn isn’t a character I can personally relate to or particularly like, I admire Nunes’s ability to keep her in character and make her feel plausible. The action is fast and the romance side of this romantic suspense novel doesn’t bog down the suspense and is exciting enough to please the pickiest action reader.  Nunes does an excellent job of developing characters who aren’t all good or bad and like William Faulkner giving readers a sympathetic picture of the background that made her villains who they are. Shades of Gray is the second book in the Autumn Rain series.  Though it would be helpful to read the first volume, Imprints, the reader won’t be lost reading this one as a stand alone.

Nunes has had more than thirty books published, is actively involved with LDStorymakers, and she and her husband are the parents of six children.