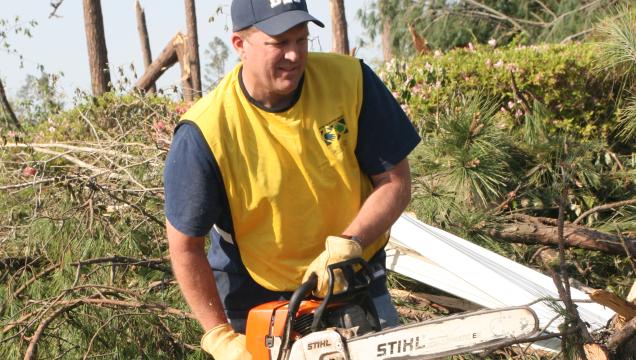 Members of The Church of Jesus Christ of Latter-day Saints are helping with cleanup and recovery efforts after a series of violent tornadoes struck the southern United States.

Latter-day Saints in North Carolina have been working for two days to help neighbors whose homes were damaged or destroyed. On Sunday, 17 April 2011, local Church leaders asked members in 29 congregations in Fayetteville, North Raleigh and Holly Springs to leave their church meetings early to assist in the cleanup effort. “We have friends and neighbors who are in need,” stake president Joseph Catlett said. “Go home, put on your work clothes, and let’s go help.”

Mormon teenager James Tollett, who helped haul tree limbs and rubble, said he was shocked by what he saw. “I’ve only seen things like this on the news or the Internet. There was so much damage. Trees split houses and cars right in half,” he said.

Hundreds of Church members in their yellow Mormon Helping Hands

vests worked to spread tarps across damaged roofs, remove fallen trees and clean debris from yards. Others helped residents rescue their valuables from beneath piles of rubble. One woman who received help commented that she was “deeply moved” by the sea of volunteers who came to her rescue.

Fayetteville resident Stephen Sanders says the volunteers are glad to contribute to the cleanup effort.

“It feels good to help, especially these folks who are hurting so badly. The look of gratitude in their eyes makes it all worth it,” he said.

Despite the devastation, there was a sense of hope and camaraderie as the Mormons worked side by side with their neighbors to help those affected by the tornadoes. “Our hearts are always warmed when we see neighbors helping each other,” Catlett said. “It captures the essence of our faith and our religion.”

All Latter-day Saint missionaries in the area are safe and are helping with the cleanup effort. Three homes belonging to Church members were destroyed and one meetinghouse sustained minor damage. Over the next few days, Church leaders will work closely with religious, civic and government agencies to evaluate needs and determine how the Church may provide additional resources and help.

See this story at the LDS Newsroom