A small army of scholars is toiling at the Church History Department of The Church of Jesus Christ of Latter-day Saints to publish Joseph Smith’s papers, and this week a third volume Revelations and Translations, Volume 2: Published Revelations has hit the bookstores. 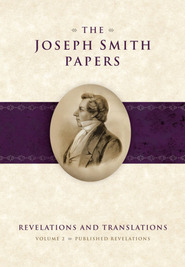 This  new book is a companion to Manuscript Revelation Books,  which presented the earliest surviving manuscripts of Joseph Smith’s revelations, used by the prophet and his associates in publishing the scriptures of their day.  Now this book features the printed versions of Joseph Smith’s revelations that were published or in the process of being published during his lifetime.

Richard E. Turley Jr. , assistant historian and church recorder, said that an anticipated 20 volumes will be published—cut back from the earlier expectation of 30 volumes because, in a bow to the power of the digital age, the other volumes will instead be published online.

Turley noted, “Making Joseph Smith’s papers available to the public demonstrates both our desire for transparency and our hope that others can come to know him as we have.”

“Few, if any, organizations of similar size have such a rich documentary record. Few, if any, make so much information about themselves available to the public.”

Turley notes that when the public talks about Joseph Smith, “misinformation is the problem.” With these volumes, “we can talk about real issues rather than having to chase red herrings.  Most scholars that we know don’t want the junk.  They want to get directly to the good stuff so this is an important service.”

He admits that some scholars will use the material responsibly and some irresponsibly, but “we can’t do much about that.”  He noted that “Investing so much energy is an expression of hope and trust that scholarship that results from good information will be beneficial for the world and the church on the whole in the long run. “

Turley noted that In the past people have come to know Joseph Smith large through biographies that have filtered through an author, which has its place, but now this project allows people to see Joseph’s own papers without that filtration.

The books are slowly, but consistently penetrating the research libraries of the country, and Turley anticipates that in the long run  most research libraries will have these volumes and this is a work that will remain an important milestone for the LDS Church.

Sixty-five thousand copies of the first book in the series, Joseph Smith’s Journals were purchased, an unprecedented number in the documentary editing world.

As this work is ramping up, Turley expects that two volumes will be published a year in the Joseph Smith Papers series.

The Contents of Published Revelations

Revelations and Translations, Volume 2 Published Revelations has several noteworthy sections including high-quality photographs of the Book of Commandments (published in 1833).  This is the book whose pages were  destroyed when the printing press in Independence, Missouri was sacked, and the two little girls took five signatures of pages and hid with them in a cornfield while the mob raved.

Yet, according Riley Lorrimer, volume editor, the page ends “after the word Ephraim in the middle of a revelation.  If you look in the manuscript book from which the revelation was taken, the rest of that revelation is marked up for publication.  We feel quite confident that there was more that was meant  to go into it.  In all, nine other revelations were marked up for publication and three others  fall into that same time period.  A revelation printed in the Evening and Morning Star  was called an appendix.  We feel confident…that these 13 texts—12 revelations plus the  testimony of witnesses were meant to be part of the Book of Commandments.”  They have been included in an Appendix in the book.

Also included in the volume:

What the editors found fascinating in working on this volume was the importance early Church members placed on these revelations.  Jensen noted, “It is interesting to look at the mere fact that they are publishing these revelations…In the short span from 1832 until 1844, the revelations were used as a tool to argue who should run the church, what the authority should be.  We had the revelations taking this significant place in Mormon theology, Mormon thought.”

The book is available at most LDS bookstores or can be ordered online for $69.95.

I don't need any "transparency" on Joseph Smith, I know already he is a prophet of God. The Holy Ghost witnessed this truth to me and others already without these new transparencies. Seems that the transparency is for the doubters, who I doubt still, will try to gain a testimony. Time will tell if this actually converts anyone new, or merely serves to stave off an onslaught of PC police who accuse the Church of anything and everything.