The Haunting Message of Haun’s Mill 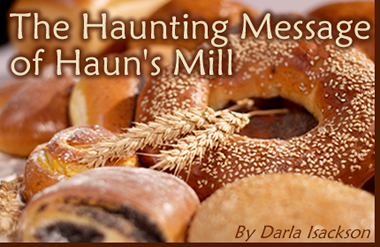 The morning was fresh and beautiful at the Haun’s Mill settlement. The children laughed and played and chased each other while the adults went about their daily tasks with no premonition. Yet many were living their last hours on this earth. The saddest part of that story is, that if Jacob Haun had followed the Prophet’s counsel the mob would have ridden in to find the settlement deserted.

John Lee was an eyewitness to an important conversation on 26 October 1838. He recorded the Prophet Joseph’s words to Jacob Haun: “Move in, by all means, if you wish to save your lives.” Haun replied that if the settlers left their homes all of their property would be lost and the Gentiles would burn their houses and other buildings. Joseph replied, “You had better lose your property than your lives, but there is no danger of losing either if you will do as you are commanded.”

You know what happened and you know the pattern. A prophet speaks. Some give heed. Many others do not. The consequence follows—and sometimes the consequence is death.

Thousands disregarded the Prophet Noah’s warning and lost their lives in the flood. Neither the mob at Haun’s Mill nor the rising waters cared one whit for the excuses the people had for their disobedience. Neither would calamity or famine care for ours.

Recently we, as members of the Church have received yet another warning from our prophets. A plain spoken, specific message of guidance from our First Presidency in regard to food storage inserted in the July Ensign. Members of the Church were told in clear terms to build a three-month supply of food that is part of our daily diet, to store drinking water, establish a financial reserve, and finally, to “build a supply of food that lasts a long time and that you can use to stay alive, such as wheat, white rice, and beans.” I highly recommend that every member take another look at this important insert. The title message: “Family Home Storage: Get Started!” is a encouraging one, really, because the very wording indicates there is still time to start, time to heed, time to accomplish the necessary preparation. But there is no doubt that the time for action is NOW.

Roger K. Young has written and lectured extensively on this subject and has given me permission to draw from his material at will. I want to share some of the best ideas and quotes he has gathered.

As I sit here at my computer working on this article, the date is 9/11—six years after the tragedy that shook Americans out of their false belief that such things never happen here. On October 6, 2001, in the Sunday morning session of October General Conference, just days after the planes hit the twin towers, President Hinckley said, “We cannot provide against every contingency. But we can provide against many contingencies. Let the present situation remind us that this is we should do. As we have been continuously counseled for more than 60 years, let us have some food set aside that would sustain us for a time in case of need. But let us not panic nor go to extremes. Let us be prudent in every respect.”

Three months later, (January 20, 2002) the First Presidency took the unprecedented step of issuing a special letter to leadership asking that food storage (specifically having a one year supply), be taught in every branch, ward, district and stake in the Church.

For the first time, on the back of this letter, the First Presidency outlined the minimum of basic food items to be included in such storage: 400 pounds of grains per adult; 60 pounds of legumes (beans, split peas or lentils, etc.) 16 pounds of powdered milk, 10 quarts of cooking oil, 60 pounds of sugar or honey; eight pound of salt; and 14 gallons (a two-week supply) of water.

Following this, the Church made a major change at the Bishops storehouses, creating monthly survival food storage boxes for one person at tremendously low prices. A person could purchase one a month. When they had twelve of these boxes they would have a years supply of basic food storage. This plan made the step-by-step completion of President Hinckley’s counsel possible for almost any member (with the obvious exception of those who live in countries where food storage is prohibited by law).

Since then, we have all heard many lessons and talks on this subject. We can never say that we have not been sufficiently warned.

Has Counsel Ever Been More Plain?

What will the consequences be if we choose to disregard the straight forward, consistent counsel of our leaders? Will our excuses feed our children when the time for preparation is past? Personal spiritual righteousness and gospel zeal in every other gospel arena cannot guarantee the temporal protection of the Lord and excuse an individual from obeying this counsel of the Prophets and Apostles.

We can think of many precedents where a member or a leader was trying hard in so many areas and be doing a tremendous amount of good. Yet if they, like the Haun’s Mill settlers, at the same time, ignore counsel given repeatedly by prophets, they can suffer terrible consequences.

Another famous historical example of this very issue is the Martin and Willey handcart experience. Here we see a group of good, righteous individuals and their local leaders ignoring counsel from Prophets and Apostles and suffering the consequences. They believed that their personal righteousness would protect them in their disregard for following the counsel of the Apostles. (See B. H. Roberts, Comprehensive History of the Church, Vol.4, Ch.98, p.91)

How Does All This Apply to Us?

Roger K. Young said, “I can’t tell you how many times I have talked with people who are wonderful, faithful members of the Church, some even who are ward and stake leaders, who don’t have enough food storage to last more than a week or so. (Even when they have been well blessed in material possessions and income.) In our discussions about how the counsel for food storage has been repeated by every prophet for over 60 years they commonly respond that with all of the other issues they are dealing with, food storage just isn’t very high on the priority list. Temple work, family history, missionary work are all much more important to them than food storage. However, some explain that if the Prophet made it a commandment, like they did with the Word of Wisdom by including it on the temple recommend interview, instead of just counsel, then they would move it up on the priority list.

They believe the very same false doctrines as did the members of the two ill-fated groups mentioned above. First, they falsely believe that their personal righteousness will save them. After all, they are busy going to the temple, fulfilling Church callings, sending missionaries out, etc. in other words, doing the works of the righteous. Surely, the Lord will be merciful to them and take care of them despite their lack of attention to this small item. They discount what President Benson taught on this point:

“Should the Lord decide at this time to cleanse the Church–and the need for that cleansing seems to be increasing–a famine in this land of one year’s duration could wipe out a large percentage of slothful members, including some ward and stake officers.

Yet we cannot say we have not been warned.” (Teachings of Ezra Taft Benson, p.265)

Additionally, they commonly believe that those terrible things that have been prophesied won’t happen to the righteous and so they need not prepare for them. Many prophets, including President Lee and President Kimball addressed this terribly false notion, but President Benson said it best in his “Rue The Day” statement:

“Too often we bask in our comfortable complacency and rationalize that the ravages of war, economic disaster, famine, and earthquake cannot happen here. Those who believe this are either not acquainted with the revelations of the Lord, or they do not believe them. Those who smugly think these calamities will not happen, that they somehow will be set aside because of the righteousness of the Saints, are deceived and will rue the day they harbored such a delusion.” (Teachings of Ezra Taft Benson, p.265)

Roger K. Young said, “The Lord has warned and forewarned us against a day of great tribulation and given us counsel, through His servants, on how we can be prepared for these difficult times. Have we heeded His counsel? It is hard for me to understand why or how so many good and wonderful people can discount what the prophets have said, again, and again, and concerning what will suddenly happen to the world in the future. President Benson said: “The revelation to produce and store food may be as essential to our temporal welfare today as boarding the ark was to the people in the days of
Noah.” (CR October 1980, Ensign 10 [November 1980]: 33.) Teachings of Ezra Taft Benson, p.266)

It is important to note that the people who didn’t get on the ark, suffered and died by the very calamity that for 300 years had been prophesied would come upon them.

People, including members of the Church, have always had a habit of believing that things won’t change drastically, or that since it hasn’t happened after so long, terrible things couldn’t happen to them. It is a part of human nature. However, the scriptures are very clear that these terrible cataclysmic events, some perhaps 20-30 years prior to the actual return of the Savior in power and great glory, will come suddenly upon the heart of the Church, and then be poured out upon the rest of the world.

“Behold, vengeance cometh speedily upon the inhabitants of the earth, a day of wrath, a day of burning, a day of desolation, of weeping, of mourning, and of lamentation; and as a whirlwind it shall come upon all the face of the earth, saith the Lord.

“First among those among you, saith the Lord, who have professed to know my name and have not known me, and have blasphemed against me in the midst of my house, saith the Lord.” (D&C 112:24-26)

It is noteworthy that President Hinckley quoted from this scripture in his famous Sunday morning talk given in general conference following immediately following 9-11.