If you enjoy Meridian’s inspiring, educational and up-to-minute coverage, please donate to our voluntary subscription drive here.  You make all the difference on whether we can bring Meridian home to you. 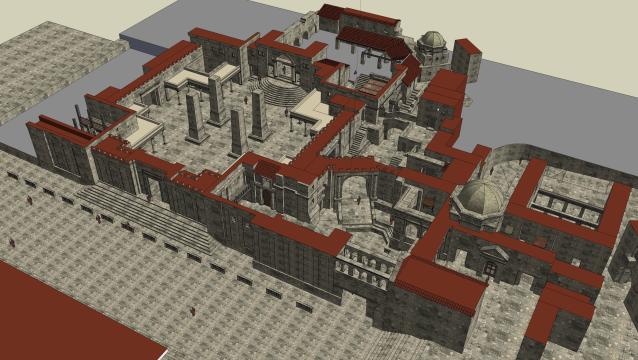 The Audiovisual Department of The Church of Jesus Christ of Latter-day Saints is building a large Jerusalem set on their new motion picture back lot just south of the communities of Goshen and Elberta, Utah, to film New Testament footage. These video productions will help all people better understand the life and ministry of Jesus Christ, and will be used for Church Educational System curriculum, missionary efforts, visitors’ center exhibits, online Mormon Messages and many other projects.

“We are creating a body of work that will reside in our library, a spiritual stock footage library,” said Elder Lynn G. Robbins, a member of the First Quorum of Seventy who oversees the Audiovisual Department.

The back lot set will recreate specific parts of ancient Jerusalem including streets, courts, synagogues and other areas. Additionally, the geography of the area where the set is being built allows the Church to recreate Biblical environments such as the plains of Judea, rolling hills, the Jordan River, a synagogue and many other locations with striking similarities to the Holy Land.

“The property—nearly a mile square—is unique; plains, groves of cedar trees, a stream, numerous valleys, gulleys, even sand dunes,” said John Uibel, executive producer of the New Testament Video Library project. He says the Church-owned property, located about 30 minutes from the Motion Picture Studios in Provo, Utah, can be made to closely resemble ancient Jerusalem, some Book of Mormon locales and many environments from the stories of Church History. The Utah site was the preferred location because of construction logistics and the speed and ease of use. Construction of the Jerusalem Set—the size of a football field in each direction–began in November 2010 and is scheduled to be completed Spring 2011. “This is long term,” said Elder Robbins. “It’s being built with materials which can be used for decades to come not just years to come.”

The Church’s Audiovisual Department is currently casting actors for the New Testament film project, which is scheduled to begin shooting in May. When this filming project is complete, the back lot will be used for many other projects focused on the New and Old Testament, Book of Mormon and Church History.

Regarding the cost of the project, Elder Robbins said, “Comparing it to the costs we would have incurred had we gone on location, this is by far the less expensive option.”