Finding Wheat, Barley, Linen and Silk in the Book of Mormon | Meridian Magazine

Finding Wheat, Barley, Linen and Silk in the Book of Mormon 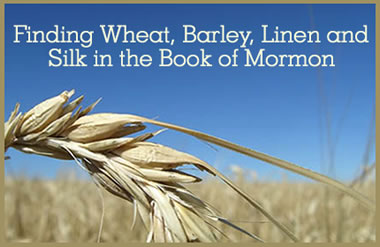 Editor’s Note:  The following article is courtesy of FAIR, a non-profit organization dedicated to providing well-documented answers to criticisms of LDS doctrine, belief and practice.  FAIR can be found online at www.fairlds.org.

In part 1 of this 6-part series on supposed Book of Mormon anachronisms, it was shown that

a. it is entirely possible for things to disappear without a trace and
b. it is not uncommon to rename unfamiliar items with the names of familiar items.

Among the critics’ list of supposed anachronisms are barley, wheat, silk, and linen.

For more than a century after the Book of Mormon came from the press, many critics have claimed that the book was fraudulent because it listed “barley” among the Nephite grains. Barley, the critics assured us, was unknown in the New World until the Spanish introduced it.

An article in Science 83, however, revealed that pre-Columbian domesticated barley had been discovered by archaeologists at an ancient Hohokam Indian site in Arizona.1 The (non-LDS) author of this article suggested that the barley might have been imported from Mexico at a very early date.

It is interesting that Alma 63:6-10 describes various Nephite migrations to the North that might have influenced North American cultures and crops.  To the surprise of many, the find at the Hohokam site in Arizona was a first only because it yielded “cultivated” or “domesticated” barley.

Biologist Howard Stutz has recently disclosed that “three types of wild barley have long been known to be native to the Americas.”2 Furthermore, scholars now report that other examples of what may be “domesticated” barley have been found in Eastern Oklahoma and Southern Illinois, dating from 1 to 900 A.D.3

If hitherto unknown barley can be discovered in ancient North American sites (some of which demonstrate Mesoamerican influence) there is little reason to suggest an anachronism in the Book of Mormon’s usage of the term “barley.”

Considering the recent discovery of ancient New World barley, it is possible that real wheat was present during Book of Mormon times but has since disappeared. As anthropologist Dr. Sorenson points out: “That such an important discovery [ancient New World domesticated barley] could have gone undiscovered for so long by archaeologists justifies the thought that wheat might also be found in ancient sites.”4

It is not unlikely that vegetation that existed at one time could disappear at a future date. When the Spanish arrived in the New World in the sixteenth century, for example, Bishop Landa wrote how they helped the Indians to raise European millet, which grew marvelously well in the area. Four centuries later, however, botanists were unable to find even a trace of the millet about which Landa had written.5

A recent study of amaranth, an Old World grain that was used in similar fashions (and cultural events) in pre-Columbian America, has lead some scholars to conclude that the grain was brought to the New World by ship in ancient times. Amaranth, which is not unlike wheat, could have been the “wheat” mentioned in the Book of Mormon.6

The term “silk” is mentioned only once in the Book of Mormon (Alma 1:29), but it is included among the critics’ list of supposed Book of Mormon anachronisms. Although the type of silk with which we are familiar has not been found, other types of “silk” were known in the ancient New World.

The Spanish reported several kinds of “silk.” One kind of silk was spun from the hair of rabbit’s bellies, another may have come from a wild silkworm, and yet a third came from the pod of the ceiba tree. Spanish chronicles report that types of “silk” were spun and woven in Mesoamerica before their arrival.7

As with wheat and silk, it is probable that Book of Mormon linen refers to linen-like items rather than the linen with which we are familiar. Bernal Diaz, for instance, who served with Cortez, described native American garments made of “henequen which is like linen.”8

Did Bernal Diaz and Bishop Landa describe the “linen” familiar to Europeans? No.  Nevertheless, to Diaz and Landa, these particular native garments were like “linen.” Who could fault the Nephites for referring to similar fabrics with familiar names?

“The fiber of maguey plant,” writes Sorenson, “from which henequen is manufactured, closely resembles the flax fiber used to make European linen.”10

For more details on this topic see https://www.mormonfortress.com or https://www.fairlds.org. Written by Michael R. Ash for the Foundation for Apologetic Information and Research (FAIR), Copyright © 2003. www.fairlds.org