Do You Have an Elephant on Your Menu? | Meridian Magazine

Do You Have an Elephant on Your Menu? 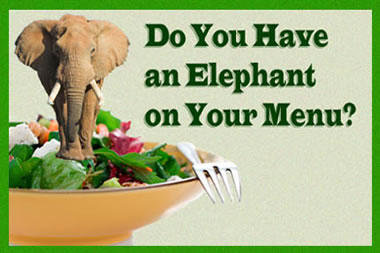 I recently met a friend, also a professional genealogist like me, and found him caught up in a difficult research project.  He had received an assignment to solve a genealogy problem in Pennsylvania.

The clients provided a great deal of data about the family, having already pursued the research as far as they were able.  The previous research appeared to be very thorough and complete.  Vital records had been searched, along with censuses, Church records, court minutes, deed records, probate files, cemetery inscriptions, and published histories.  Military records had been looked into as well.  They had traced the family back to a certain point, and had come to a brick wall.  Now the problem was in my friend’s hands to solve; and to him the project seemed overwhelming.

What the clients had spent years searching, the professional researcher was now expected to resolve in a matter of a few hours.  My friend had looked into each group of records, but found he was just repeating searches the client had done.  The image of this problem had grown so big in his mind that he had simply shut down, and had postponed research on it for several weeks.  The project was his responsibility, but now he was afraid to look at it.  What was he to do?  He had an elephant on his menu, and it appeared to be too big to eat!

Have you ever had an elephant on your menu?  A problem seemingly too big to swallow?  We all have, at one time or another, and it doesn’t have to apply only to genealogy.  Elephants appear in all shapes, sizes and colors.  But genealogy seems to attract elephants, and many people searching for their long lost loved ones, find an elephant or two on their menus.

How do you eat an elephant? The simple answer is the one I learned when I was a young man.  If you find an elephant on your menu, cut it up into a thousand little pieces and eat it one bite at a time.

Of course, I am not inviting you to eat an actual elephant; they are seldom offered on the butcher’s block in America.  I am merely explaining how to face problems of seemingly gargantuan proportions.  Divide your problem into many parts and focus on it one piece at a time.

This is just what I instructed my friend.  We sat down and studied his problem, and soon found one little aspect on which to concentrate.  The ancestor in question, whom I shall call William Johnson, had a large farm, and according to property records the client provided, Mr. Johnson’s property bordered land belonging to a Widow Johnson.  It was likely that Widow Johnson might have been the widowed Mother of William, but there was nothing to prove that, and no records had been found by either the client, or by my friend, to identify what Widow Johnson’s given name was, or from whom she might have been widowed.

There were many other people in the community named Johnson, but none seemed to fit with the Widow and her property.  Taking a closer look at the land records, I pointed out that while William Johnson and Widow Johnson shared a common border, they also shared neighbors.  A search of those neighbors’ property titles in deed records, and also in land patents and surveys, produced the name of Martha Johnson, and her husband Edward.  Edward had died just a few years earlier, but had not left a will, and his property had been divided amongst his wife and children, of which William was one.

The problem was solved with a happy ending, and the elephant on my friend’s menu quietly disappeared.

When your family history project attracts elephants, do as I did with my friend.  Spread your genealogy information out on a table.  Pick out one family you would like to search for, and focus your efforts.  If this family has been a problem for you, select one individual on the family line and concentrate on him, or one event in the life of that individual.

Now consider who this individual was.  He wasn’t simply a compilation of census records, deeds, birth and death certificates and wills.  He was a real person, who participated in a real life, in a family, and in a community.  He was a part of the history of his time.

Next, find out a little bit about that history.  Look for a published history of the town, parish, borough, or county where he or she lived.  This record may provide biographical data of the person or family in question.  It will certainly provide information about the history of the community during the time your ancestor was there.  It will describe the settling of the area, the businesses that sprang up, new churches, fraternal societies, cemeteries, military activities and much more.  With this knowledge, you now have a foundation on which to build your research.

How do you use historical information?  Picture in your mind a scenario involving a historic event as though it were a scene in a movie.  Then try to place your ancestor on that set.  Perhaps the information you have chosen pertained to the establishment of various churches or religious groups in the  area where your family lived.

But what do you do if you don’t know what religion your ancestor actually affiliated with?  First, and most important, keep an open mind!  Until research has been done, a researcher never knows what an ancestor really did, or what his affiliations were.  The modern day family and its habits or practices may be very different from the early day family.

Some groups, such as The Church of Jesus Christ of Latter-day Saints, proselytized to attract people to their church membership, regardless of prior affiliation. Some families consisted of several religious beliefs under one roof. The historical record for a community will often describe the origins of various religions in the county, how they grew, divided, and grew some more.  You may find family surnames associated with more than one church.

However, these collections are far from complete; thus, if the desired register is not found in the collections of the Family History Library, you will need to move onto the next step.  Contact the church or religious group in question, and request a search of their records for the name and time period desired.  If the records of one or more of the churches in question do not reveal information about your family, enlarge your search; your family may have attended religious services in another county, or even another state, depending on how close your ancestors lived to county and state borders.

This approach can also apply to military records, fraternal organizations, banking and insurance companies, and the list goes on and on.  Picture the situation in your mind, determine the historical setting, identify available records, contact the record holders, and then ? search.  You are only limited by your desire to find answers, and by the imagination it takes to find those answers.

So, get out your knife and fork; cut off a bite size piece, and get to work.  Eating an elephant is delicious, if you prepare for it correctly.