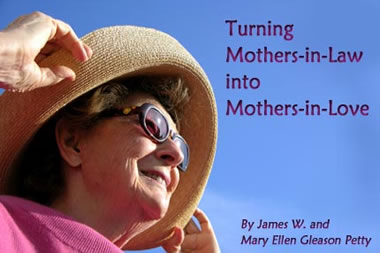 One of the toughest roles a person ever has to deal with is mother-in-law. Historically, it is one of the most difficult, most maligned, and most dreaded parts on the stage of life. “Mother-in-law” has been caricatured in literature, films, in cartoons, and in public discussion as a domineering, opinionated, hyper-vigilant individual that strikes terror into the heart of the most courageous men and women. Her food was always the tastiest, her house the neatest, her position in society was always elite.

People tend to place other people high on pedestals, or low in pits. Mothers are spoken of in idyllic terms, and we hold the position in esteem; yet for some reason the term “in law” turns an idyllic being into the enemy, and we have to decide which person our spouse’s mother really is.

Life is often a series of epiphanies, little revelations that can change lives and relationships if we apply those new interpretations to our life experiences. The Apostle Paul said in Corinthians: “When I was a child, I spake as a child, I understood as a child, I thought as a child; but when I became a man, I put away childish things.” (1 Corinthians 13:11)

“In-law” is one of those childish things; it is a label our dismissive world attaches to individuals to define their place in society.

In the society that Jesus Christ established, love was the common denominator around which all life revolved. “A new commandment I give unto you, That ye love one another . By this shall men know that ye are my disciples, if ye have love one to another.” (John 13:34-35). Based on this law, isn’t it reasonable that we should define our relationships? Rather than “in-law,” they should be “in-love.”

As in all things, it is sometimes easier to say something than it is to do it. I believe this relates to that “child” thing Paul referred to when he said, “I understood as a child, I thought as a child.” Unlike Paul, though, many of us in adult bodies remain as children way longer than needed, until we finally acquire that understanding of life that enables us to think as adults and be men and women.

Too often this immaturity is taken into marriage and so-called adult-relationships. We take on responsibilities in business, at church, and in the social world that identify us as people of value and status while only looking the part of being adults. But the child still shows its face after marriage when we continue to regard the family we have married into as the “in-laws” or even “out-laws” in some cases.

A Change of Heart

It is when paradigm shifts come though the tutorials of life and the little epiphanies are applied, that we start seeing relationships in a new light – in an adult way. And we are often amazed at how other people have changed. We begin to recognize good qualities in others rather than harbor ill will over their faults, and our hearts begin to turn.

This turning of the hearts may take place without us even realizing that we have changed our opinions, but often the change is so sudden, that it seems to occur like a lightening and thunder revelation from Heaven. That is what this article is about. Those experiences when mothers-in-law become mothers-in-love, and the result is a life-altering change.

I was one of the most fortunate of men. By the time I had a mother-in-law, she was already regarded as my mother-in-love. My mother-in-love, Ellen Eilene McRae Osterbauer, from the moment I first met her, treated me as one of her own, and accepted me with respect as a person of worth. My relationship with Mary was made so much easier, because I was “in-love” with her mother before we married. I learned from her that it was a two-way street and both must walk it. A mother-in-love relationship comes from how one regards others, and how others regard that one.

Mary’s experience with my mom, was, well . let Mary describe it. “I have been married for nearly forty years, and am now well into the second decade of my own experience as a mother-in-law. During that time, this dramatis persona has moved from the Wicked Witch of the West to mother-in-love, because of my incredible, dynamic, powerful, and sweet mom, Medalou Winter Petty, my husband’s mother.”

Mary met my mother early in our nearly two-and-a-half-year courtship. I was the first of their children to marry and bring the in-law relationship into their experience. My parents welcomed her into our home as “a” girl that I knew. The longer we were together, the friendlier they became; but then, and even years into our marriage, Mom kept Mary at arm’s length in their relationship.

Looking back on that time, I realize now that I was still their “child,” and the people I had attached to were seen as extensions of their “child.” Mary was my friend, not a daughter.

Mom was the wife of a small-town doctor, with two sons and four daughters; and played the social role to the hilt. She was active in community groups, ran the PTA, served as Relief Society president, contributed to the arts, and was active in local politics. On top of it she kept a beautiful home, and Sunday dinner often looked like it came right out of Norman Rockwell.

As a role model for Mary, she was very intimidating. Mary felt that her home was never pretty enough, or her table set right. Our clothes were too plain, and even our children, as they came on the scene, could not compare to the pictures of the perfect children my mother had in her albums. (I really was a pretty baby!) Mary had hoped through marriage to become daughter #5. It seemed it would never be.

My parents left their small town practice and home in the 1980’s to tackle new opportunities in the country of Saudi Arabia, where my father worked as a physician for King Faud in the king’s hospital in Riyadh. Mary and I learned of their experiences by way of postcards and long-distance phone calls. Once a year they returned for a short visit and shared their wonderful experiences with us and our growing family.

For seven years, Dad served in the stake presidency, while Mom was the stake Relief Society president for the entire country of Saudi Arabia. She also taught American English to one of the grandsons of the King. Highly skilled at shopping in the USA, Mom was absolutely in heaven when she visited the “suks” (stores) in Arabia. She maintained the financial base of that nation, and Dad labored to keep the bank account even.

Although life seemed grand during the seven years they spent working in that far-off land, circumstances drastically changed their position at home. Their house was sold, and all of their possessions were put in storage, awaiting their return. Overnight, it seemed, their social world in America dissolved. They had gone, and others in their age group began retiring, and moving away themselves. Mom lost her all of her closest friends, forever.

In 1987, Mom and Dad left Saudi, and directly accepted the first of three mission calls, this one to serve in the London England Temple. This is where Mary and Mom would discover each other.

In June of 1988, after serving half of their mission in England, Dad invited Mary and me to visit them. A principal portion of our ancestry came from England, and as a professional genealogist I had a great interest to go there and discover information that was not yet available in Salt Lake City, Utah.

Because of their mission and their activities in the temple, Dad and Mom were also very interested in learning more about their English genealogy. We planned out an itinerary starting from East Grinstead, Surry, where the temple was located, and traveling west through Hampshire, to the winter ancestral homes in Bath and Brompton Ralph in Somersetshire; then North to Wales and on to the Golden Valley in Herefordshire, where other grandparents had lived, and heard the gospel.

We went to the Moors of Staffordshire, and then to Birmingham and Stratford-on-Avon, from where my Father’s family hailed, and then across the land to Nottinghamshire, where more of Mom’s family stock were founded. And then back to London.

These three weeks were amazing. We visited village after village, drinking in the sights and history of the homes of our ancestors. The country was beautiful, the architecture was often both ancient and quaint; and we experienced miracles learning about our genealogy. But the biggest miracle was taking place in the backseat of the car.

I had learned to drive on the wrong side of the road when we first got to England, and I found I could do it tolerably well. But we let Dad do all of the driving. It was his ticket, and he felt it was his responsibility. During the course of the tour we only burned up three clutches.

I sat in the front seat with him as moral support, while Mary and Mom stayed in the back. To this day I don’t know if it was the fact that Mom no longer had any close friends in her life, or if Mary had grown up to the point where Mom could recognize her as a companion in her own right, but during those weeks in the back seat they began to talk, and they began to share, and they began to laugh.

They talked and shared and laughed from Winchester to Evesham, where Dad made an unintended comment that hurt Mary, and she bolted, as the English would say. Mom bolted and found Mary and they talked, and they cried, and they laughed. The communication continued onto Birmingham and Stafford, to Nottingham, and back to London. When we said good bye at the temple, it was Mother-in-Love and Daughter #5-in-Love who hugged and said farewell.

In the twenty years that have followed, that “in-love” relationship has grown such that Mary can’t believe there was ever any other feeling between her and Mom. Dad and Mom are home from their missions, and now in the twilight of their lives, they live nearby, and we visit often to talk, and share, and laugh, and love as family-in-love.

Between now and Mother’s Day we invite all of Meridian Magazine’s readers to submit their mother-in-love stories. Selected entries will be published throughout the month of May in honor of these special women who are our mothers-in-love. Click here to send your inspirational story.