Ancestors are the People of HistoryT: The Canute Peterson Story - On a Swim and a Prayer | Meridian Magazine

Ancestors are the People of HistoryT: The Canute Peterson Story – On a Swim and a Prayer

Ancestors are the People of HistoryT: The Canute Peterson Story – On a Swim and a Prayer
By James W. Petty, AG, CG 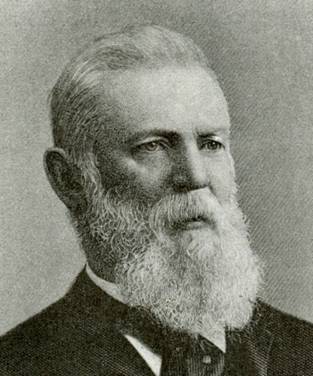 In our continuing series, Ancestors are the People of HistoryT, Sister Janet Peterson has written a brief history of her husband Larry Peterson’s 2nd Great-Grandfather, Canute Peterson.  Canute’s story is a testimony to both his descendants and all of us, of what one person can do and what his impact can be on family, community and Church.

This story doesn’t focus on any single historical event, but rather, it shows how our ancestors through their life experiences often stimulate events to take place, impacting the world’s timeline.  Our ancestors were in a position to make choices and take actions that affected the lives of their families and the people around them, and even, affecting the lives of many other people and the future.  We call these experiences “historical events,” and by relating these accounts we “bring history home.”

Canute Peterson was one of those people who followed the promptings of the Spirit of our Heavenly Father in his life; and influenced the course of history in his community and the Church as a whole.
Sister Peterson’s recording of Canute’s life story here in Meridian Magazine illustrates just how easy it is to preserve and share the simple telling of an ancestor’s life with the wider Internet audience and to contribute to the great mission of Elijah. By sharing their ancestor’s history with us, the Petersons will see it spread across the globe though the marvels of the Internet, and yet unknown loved ones will come to them to extend their family history. You too have ancestors just like Larry and Janet Peterson; they have all been on the world’s timeline like Canute and have a story waiting to be told.  And as your heart turns to your fathers, you too can participate in Ancestors are the People of HistoryT and reap the blessings of family history work.

At age seventy-eight, in 1902, Canute Peterson, of Ephraim, Utah, reviewed his life and the promises given him in his patriarchal blessing by John Smith in Nauvoo, Illinois, sixty years earlier. Patriarch Smith told the newly converted Canute that “he shall have an inheritance in Zion, . . . fill a great mission, . . . gather thousands of the remnants of Jacob to the place which He hath appointed, . . . and raise up a posterity to keep thy name in remembrance.” Canute Peterson had regarded this blessing as a guide to follow in his life, and now looking back on his experiences, he realized the legacy he and the Lord had provided for the Peterson family.

Canute was born on his father’s farm in Eidsfjord, Hardanger, Norway, on May 13, 1824. Besides farming, Canute’s father, Peder Jonson, fished, hunted, and raised sheep, goats, and reindeer. His forefathers had lived in this picturesque area surrounded by black granite mountains for hundreds of years. Canute described his home as “very snug and tight, built of beautiful hewn logs.” He did not go to school, but his mother, Herborg Knutsen, taught him the Lord’s Prayer, hymns, and the Ten Commandments.

Desirous to move to the promising new land of America, the Peterson family left Norway in 1837 and settled in LaSalle, Illinois, a community of Norwegians. Canute’s father, Peder, died just a year later. An only child, young Canute found work with farmers to support his mother, who had severe rheumatism. Canute walked all night on Saturdays to spend the Sabbath with his mother, then, on Sunday nights, walked back to the farm where he worked.

As LaSalle County was just 200 miles from Nauvoo, missionaries from The Church of Jesus Christ of Latter-day Saints preached the gospel to the group of Norwegians in August 1842 and baptized nearly 100 people. Canute and his mother were among them. Two years later, Canute was called on a mission to Wisconsin. On his journey home in the early spring, he had to cross the Fox River, which was full of floating ice. Since there was no bridge nor ferry within miles, he undressed, tied the bundle to his head, and waded and swam to the other shore. He said, “This was a very hard task, but we got across all right.”

Canute traveled to Nauvoo in January 1846 to receive his endowment at the Nauvoo Temple. Because of the intense persecution of the Saints, preparations for the great exodus were going on night and day. Canute offered his help for the journey westward but was told by Charles C. Rich, a Church leader, to take care of his ailing mother. He did so until she passed away in June 1848.

In April 1849, Canute headed west with a wagon train of Saints led by Ezra T. Benson. Among the group was Sarah Ann Nelson, a young woman he was acquainted with in LaSalle. En route she was stricken with cholera, as were others in the camp. Canute went into the woods to pray that the Lord would spare Sarah’s life. He recalled, “I became so filled with the Spirit of the Lord that I thought I hardly touched the ground while going from the place of prayer to the wagon.” He went to the wagon where she was lying and blessed her. She was immediately healed. He soon proposed to Sarah, and they were married at Council Bluffs, Iowa, July 2, 1849, by Elder Orson Hyde.

Canute became the hero of the group for when they came to a large river, they found the ferry had been left on the other side. Canute, with much effort, swam across the wide river and brought the ferry back. He said, “After this, when there was any swimming to be done, I was generally asked to do it, and so became quite popular.” He described the abundance of game they found along the way—buffaloes, antelopes, and elk. “I was a lucky hunter, and brought probably as much meat into camp as most of the men,” he said. When the party reached the last crossing of the Sweetwater River, a forty-hour snowstorm stopped their progress and nearly froze people and animals.

They lived in the Old Fort in Salt Lake City, where their first son, Peter Cornelius was born in 1850. Canute and Sarah were called to help settle Lehi. In 1851 a son named Canute died two weeks after his birth. Father Canute received another mission call—this time to Norway. Peter was a toddler and Sarah was pregnant when he departed for his mission. She gave birth to Sarah Ann a few months later in January 1853. While he was on shipboard enroute to Norway, he saw in vision the birth of his daughter, as if he were back in their cabin.

Canute taught and baptized a number of people in his homeland. Many Scandinavians had been prepared spiritually to receive the gospel, joined the Church during the 1850s, and immigrated to Zion. Canute’s mission lasted more than four years.

The Petersons had five more children while living in Lehi: Parley Pratt, Canute Weiderborg, Nels, Martha Amelia, and Walber Herbertie. Martha died at age two. In 1867, President Brigham Young asked Canute to move to Sanpete County to serve as bishop of Ephraim. Canute and Sarah’s last child, John Maurset, was born there in 1868.

At this time, the Indians were very hostile and carried on the Black Hawk War. A year after Canute’s arrival, ten Indian leaders came to his home to talk over the situation; this meeting resulted in a lasting peace treaty. The Indians fondly called Canute “White Father.”

Another mission call came to Canute in 1871 to serve as president of the Scandinavian Mission. When he returned in two years, he brought with him another large group of Scandinavian converts. President Young chose Canute as the first stake president of the Sanpete Stake. He later served as patriarch. As stake president, Canute helped found the Sanpete Stake Academy, which later became Snow College. Because he had not had the opportunity to attend school, President Peterson was anxious that the young people of Sanpete County could do so. General Church leaders often stayed at the Peterson home in Ephraim, so when Wilford Woodruff and John Henry Smith were enjoying Sarah Ann’s delicious cooking, Canute approached them with the idea of a school.

Canute supervised the building of the Manti Temple, which was completed in 1888. President Woodruff stayed at his home for the dedication. Canute’s federal-style home on Main Street in Ephraim is now on the Historic Register. Built in 1869, it is a two-story yellow brick house with marbleized fireplaces and a curved stairway. A hiding place under the back room provided a refuge for President Woodruff when federal marshals were tracking polygamists during the 1880s.

Canute married two other wives, Gertrude Maria Rolfson and Charlotte Ekstrom, who lived in separate homes next to Sarah Ann’s. Altogether Canute had 21 children. At age 78, he died in Ephraim October 14, 1902.

Canute Peterson was a very normal person.  Like thousands of early Saints, he had faith in the gospel, and he followed the leaders of the church.  Each of his experiences taught him to be a better person, a loving father, and a faithful Latter-day Saint.

When parents share this story with their children they will be telling them “When times get rough and the situation you are in seems impossible to overcome, remember the story of Grandpa Canute Peterson; dive right in and swim until you get to the other shore.  Like him, you can do it.  And when your testimony is weak, remember Grandpa Canute, and go to the Lord in prayer, and the Lord will sustain you, and lift your heart.”  For the Peterson family, Canute Peterson was an Ancestor who was a Person of History.  The testimony of his life will be remembered and cherished. And now because this legacy has been preserved and shared, it can be remembered forever, to influence families around the world and motivate us on a swim and a prayer.

You can participate, too!

Each of us has had experiences or ancestors whose brush with history provides new and interesting insights and details of the past.  Recording and preserving these stories are opportunities for family history work and redeeming the living and the dead. Our children will hear these accounts and hold them in their memories, and their hearts will swell with love and turn to their Fathers. Please join us in sharing how “we touch history” and participate in Ancestors are the People of HistoryT. Sit down and spend a few minutes with your experiences and your ancestors’ lives and choose a special story to share with us. Remember, we and our Ancestors are, literally, the People of History; only by sharing the stories that we and our ancestors have experienced, will the testimonies and memories of the past be relayed to our descendants, for future generations to use and benefit from. Please send your stories to [email protected] with the subject line – APH Attention: James W. Petty, AG, CG, and we will take it from there.

For more on writing family histories, see the Line upon Line Meridian Magazine article:
Strong Links, Weak Links
President Hinckley shared an experience he had in the temple that applies to us all.
By Janet Peterson